As promised, here’s the first version of the Syrah skirt that I tested.  This was before the waistband was reworked.  See the bulk there at the sides?  That’s gone in the version you get when you purchase the pattern (through Perfect Pattern Parcel). 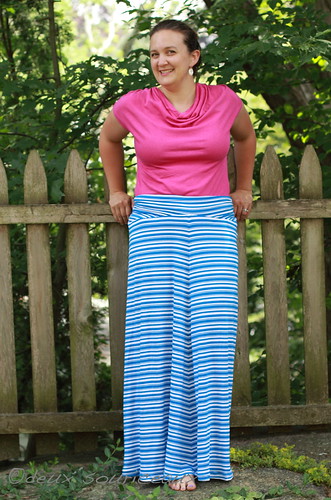 For this first test version, I used some Girl Charlee cotton spandex jersey that I had in my stash.  Since I was dealing with stripes, I chose to do the version with the center seam in the hopes of getting a pretty chevron.  You can see that it didn’t quite work out. 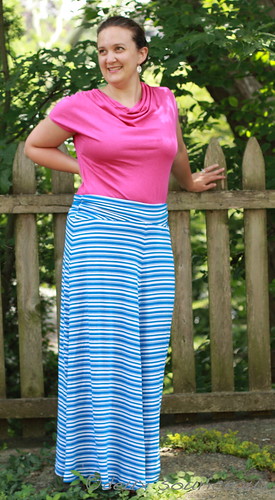 Another tester used a horizontally striped fabric and no center seam and she didn’t quite like the result.  Because the skirt isn’t a straight tube, the stripes were curving a little oddly.  But I still think this pattern can work really well with stripes.

PS: I wore that skirt all Summer even though I would have liked a deeper chevron.  And I loved it.  Not as much as the Mood one I made afterwards but enough to wear it whenever it was clean!