And you would never know it just looking at them!  They look exactly like what you might find in stores!  With topstitching, rivets, and everything! 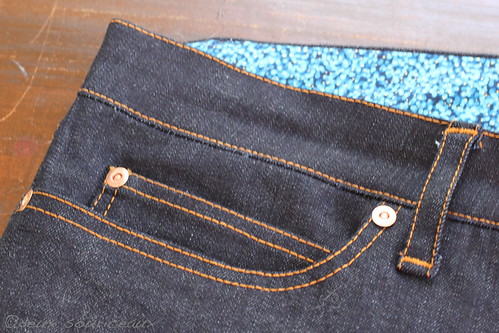 And guess what?  Pattern Review gave me the push I needed.  I looked at their contest calendar and they had one for jeans (it ends Sunday).  So I made the jeans. View A with the lower waist and less skinny legs. (Pictures are a little overexposed because I wanted the topstitching to be visible.)

I’ll be honest.  I was worried.  I didn’t have any fabric to make a muslin so I had to throw caution to the wind.  My measurements put me in a size 14 so I made that.  Yes, I did baste them first to asses the fit.  There’s throwing caution to the wind and then there’s plain craziness.  I ain’t crazy.

And then… I’m sorry to say that there isn’t actually that much to say.  Just a few things:

-The instructions were good and clear but the sew along is referenced a lot.  And I looked it up a lot.  I actually went back and forth between the two a fair bit.

–Cashmerette has some great tips for topstitching.  I did a few practice runs and ended up using my ditch quilting foot for one line with the needle moved over to the left a bit (line closest to seams).  For the second line, I used my regular foot, lining up the first topstitched line with the right side of the foot and moving the needle over a little to the right.  I have never done such even topstitching.  Never.  And each line was perfect the first time around.  Unlike the bar tacks which I still need to practice… 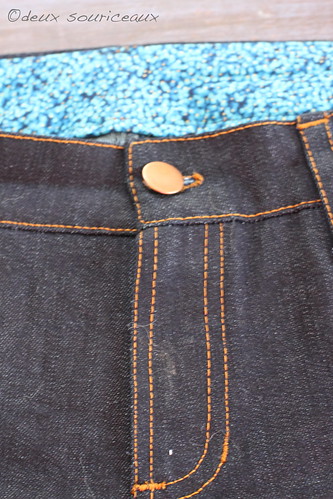 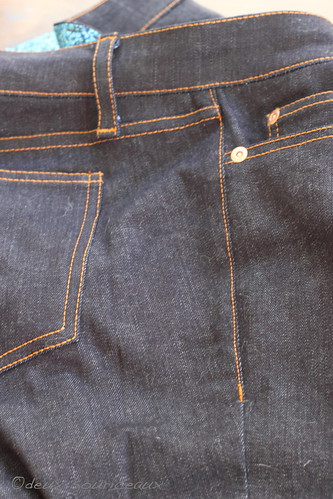 -I had a bit of a gap in the waistband so I took a teeny dart at center back.  Just 1/2″ total at the top. Hidden behind the belt loop to keep it neat and tidy. 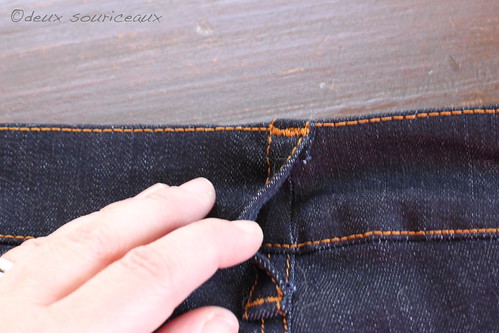 -I used leftovers from this dress for the pockets and the waistband facing. 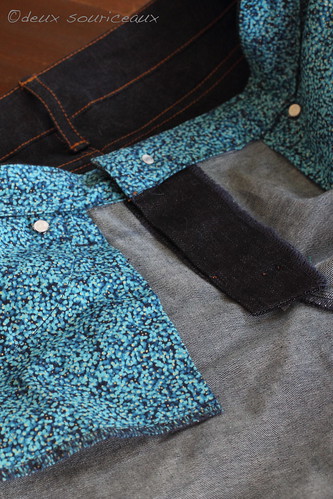 -Some of my rivet posts were too long so I padded them with a couple layers of denim.  That scares me a lot less than trimming the rivet post down. (And I’m going to need an anvil and an awl for my sewing.) 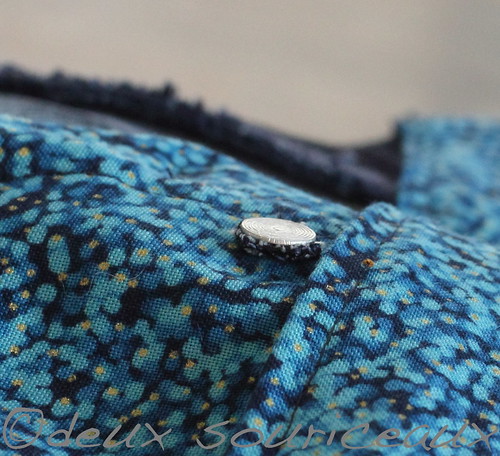 And that’s it!  Will I sew more jeans?  Yes!  There’s the fact that this is my most successful sewing project ever.  And then there’s the fact that the kit came with enough hardware and denim for two and I can’t let it go to waste now, can I?  The next pair will be mash up of views A and B.  I know a higher waist wouldn’t work with my proportions but I want that skinny leg.  I’ll also be going down a size.  I’ve been wearing my jeans and the denim has relaxed.  They aren’t baggy but the waist has grown a bit more than I like.  A belt fixes it right up but I want to try to get a better fit there.  I’m hoping the smaller size will be all that’s needed but I’m also prepared to change the angle of the center seam on the back yoke and change the waistband.  Can you tell the fear is gone?