I’m not quite sure where to start with this one. I’m perfectly aware of all the issues with it: the tightness in the bust that shows up in the back, the prickly zipper, the wonky placket…  Despite it all, I love it.  It’s a pleasant surprise. 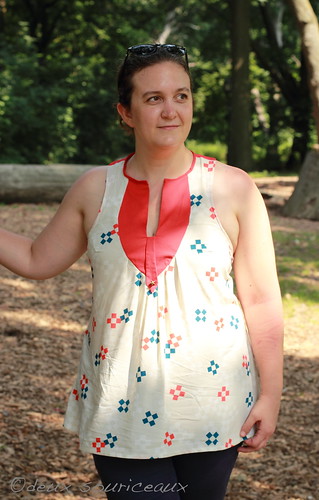 The pattern is the Simone by Victory Patterns. I wanted that pattern from the moment I saw it but I wasn’t sure it would be flattering on me.  That model is tall and slim and I’m short and definitely not slim. And I made a dress from the same pattern maker that required a bit of work to make it work on my shorter body.  The dress was fairly easy to adjust but this one? I had no clue.

The main fabric is a Cotton and Steel rayon.  It’s lightweight with a lot of drape.  I’m hopeful that it’ll hold up well in the wash.  I wasn’t sure about the print but wanted something different from my usual.  The accent is red cotton lawn from my stash.

Since I wasn’t sure about the pattern or the fabric, I threw caution to the wind and just made it up without going through a muslin first.  So what you see here? I guess it’s essentially a wearable muslin.  A very wearable muslin! It turns out I love the shape on me and the rayon is the perfect fabric for the pattern.

And the not so good? Well, while the pattern is very well drafted, the instructions are a tiny bit lacking.  Sometimes, you’re told to finish seam allowances and sometimes not.  But that inconsistency isn’t what tripped me up.  The pattern says to use a 5/8″ seam allowance unless otherwise noted.  When I sewed the placket to the front blouse, nothing was noted so I used the 5/8″ seam allowance.  And try as I might, I could not get the point neat. 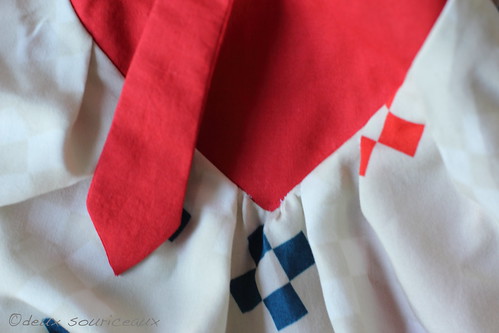 After messing with it for a bit, I gave up.  After all the tab was going to cover up that mess.  I kept reading the instructions.  That’s when I saw it.  The second set of instructions for joining front blouse and placket said to use a 3/8″ seam allowance.  I thought maybe 1/4″ had been trimmed off in a previous instruction (this set of instructions was for the piping option).  Nope.  So it turns out I should have used 3/8″.That would probably have cleared up the issues I had at the point and it would have added 1/2″ to the bust circumference.  1/2″ that might have been enough to eliminate the straining.  See, I’m between sizes 10 and 12 and chose the 10 based on finished measurements.  The 10 was supposed to give me minimal ease in the bust area and all the ease I needed in the waist and hips.  Losing that 1/2″ pushed me into no ease territory. It’s an easy fix at least. And if it isn’t enough, I can always get another 1/2″ or even full inch from the side seams. 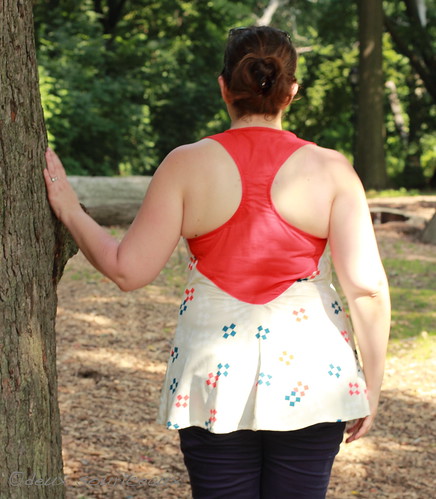 (I think some of those wrinkles are due to how I’m standing. I swear it wasn’t that bad in the mirror!)

And then, there’s the tab.  Unless I misread, I was to sew the tab up with 1/4″ seam allowance so I did.  But when I tried to sew it to the placket, it went outside the lines by about 1/8″ on each side…  I’m thinking the instructions should say to use a 3/8″ seam allowance. I tried to fix it but you can see how it wrinkles a bit even though I pressed and steamed it aggressively. 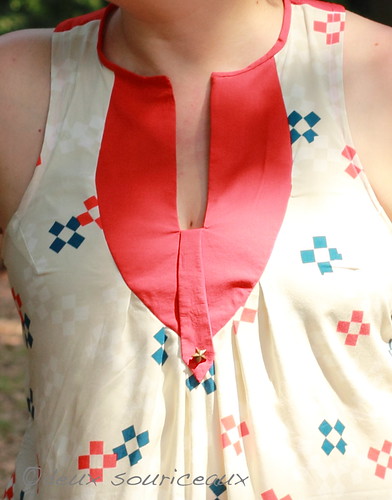 The other issues are my fault.  I was feeling too lazy to insert a hook and eye at the top of the zipper so I tried to get the zipper flush with the top.  I brought it up a little too high and now that little stopper at the top irritates me.  I need to figure something out to make it comfortable. I also had a hard time sewing the two back portions together.  Those are some serious curves!

I’m sure to make this one again, as a top and as a dress (that is, if I can find wide enough rayon) but until I do, this one makes me quite happy despite the issues. 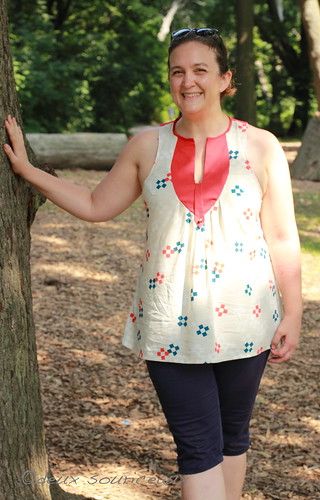 PS: Sorry for the rumpled look.  I finished this top right before V’s birthday, tried it on, and was told by the birthday girl that I would be wearing this to her party.  Pictures were taken while we were waiting for the guests to arrive, after I’d done all the prep work so…