Confession time. Kids Clothes Week was 2 weeks ago. I made, uh, 3 dresses for V, and exercise top for each girl, and shorts for E. So 6 items. I’ve taken (crappy) pictures of two dresses. And I only took them because V was wearing the dress in question that day anyway. The thing is, there’s more to photograph that wasn’t from KCW. Leggings for V from the week before and two things from me that I’ve made since then. I’m hoping to blitz some pictures this weekend but they’ll probably be crappy again (taken in front of the wardrobe doors in less than ideal lighting conditions). It’ll be what it’ll be and hopefully, I’ll be able to share some more next week.

This one was made all for V. She loves cold shoulder tops and dresses. I don’t but I love her so I bought McCalls 7737 for her when there was a sale. She wanted the same one as the girl on the left, so view C. I used some leftover ITY that I’d used for myself and that she was eyeing. Black with a white cat print. Can’t fault her taste. And I can’t even remember what size I made! I’m sorry but I am not going to unfold my carefully folded pattern just to check. All I know is that I went by her measurements which probably means I made a size 5. It’s a little big but kids grow so fast that I don’t mind. 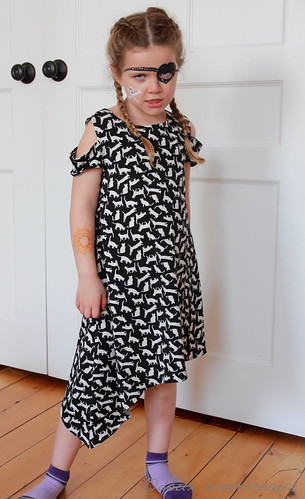 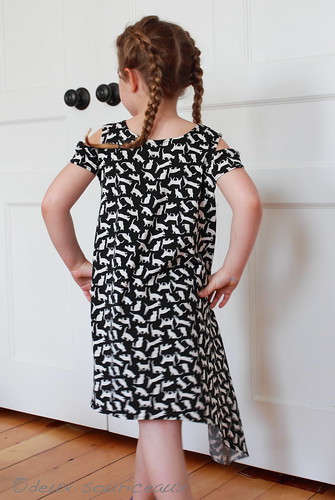 Oh, that day was the girls’ school’s Spring carnival. I took the pictures right after. V had gotten pirate makeup and she just had to give me her version of pirate face. She worked so hard on her winking so that her patch would look real. 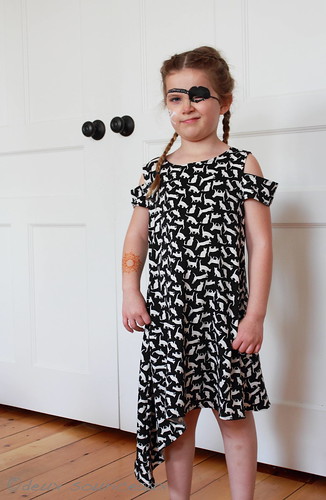 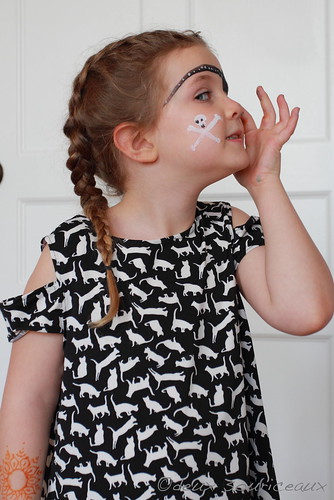 This next dress is an old Simplicity pattern I bought a long time ago for E. I’d made a dress out of this purple paisley fabric. Size 4, I think. E loved it and wore it a lot. The fabric faded quite a bit. It looks fine. You just notice the fading when you put it next to the matching bag I made that doesn’t get washed as often. Anyway, when that dress got too small for E, it was passed on to V who loved it just as much, maybe even more. So I made another one. With V’s approval, I used fabric I bought in Provence. I can’t find a website for the company but it’s Valdrôme. I made the same view as before but I added the godets on the skirt from the other view. I tried to be smart and changed the order of assembly. I shouldn’t have. There are things I didn’t think through properly and I ended up having to do a little bit of hand sewing. It looks neat enough inside but there are some annoying bits. 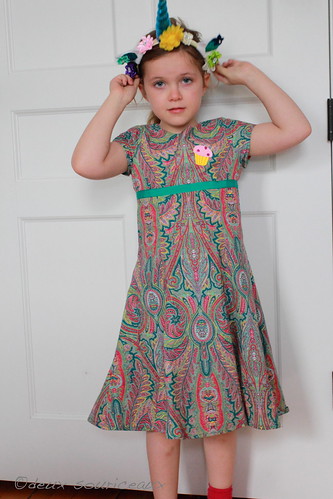 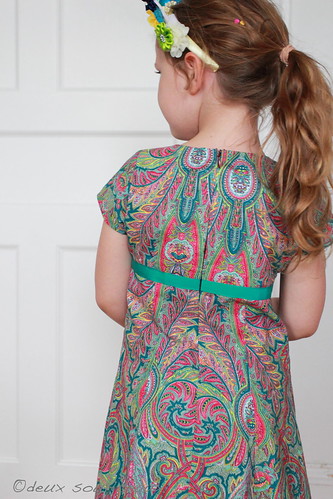 I centered the pattern on the front but didn’t bother with it on the back. I had folded the fabric so it would hopefully match but I obviously screwed that up… Some of the skirt pieces were cut upside down to save fabric. It’s hard to tell with the paisley anyway. I did make sure to alternate upside down and right side up pieces so it wouldn’t look like a mistake. 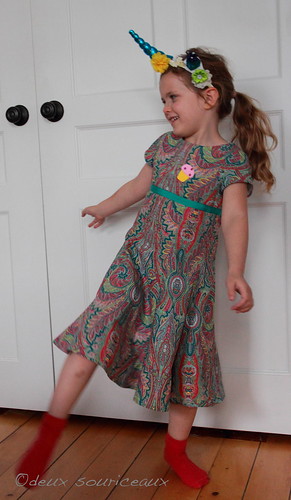 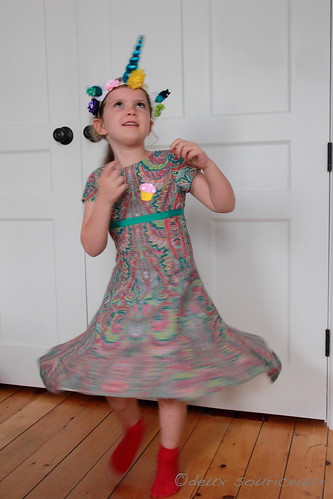 The pictures were taken after a friend’s birthday party hence the unicorn headband and cupcake sticker on the dress. V wanted a flower over the ribbon since the original had one but I couldn’t find anything that matched the ribbon (did not go all the way to Manhattan though). With a little luck, she’ll have forgotten about it.

And these were the two most successful makes. I’ve hidden her exercise top until we can get pictures though. Her eyes sparkled when she saw the back (it has 4 straps that cross in the back and she loves it). Once I clear it for wear, she may be all over it. The third dress, she should like but doesn’t because she decided a day before I made it that she now hated this style (low back) when the previous week, she was begging for low back dresses. I’m hoping to guilt trip her into wearing it on Sunday so I can get pictures. Wish me luck, I’m going to need it…