I’ve spent the last month sewing for myself and I have three dresses, a skirt, and top to show for it. So, ummm, nothing I actually needed then. All the fabric I used is from the stash though so there’s that. I had my fabrics piled up and patterns I was interested in sewing piled up next to them. And, uh, I just kind of matched them up, paying attention to the fabric amounts and types.

I’ve only gotten around to having M take pictures of one dress. My guess is it’ll take a while to get them all photographed. It isn’t like things I make for the girls that I can photograph quickly after school. This requires either a full on tripod set up with me running back and forth when I’d rather be sewing or M’s time.

This one was made Liberty of London lawn that I bought when we were in London two years ago. I originally thought I’d make a Granville shirt out of it. Except I realized the pattern in a shirt would make me feel frumpy. But not in a dress. It’s weird, I know. I went with McCall’s 7533, view A. This style is so comfortable in the heat and I loved the shaped hem. 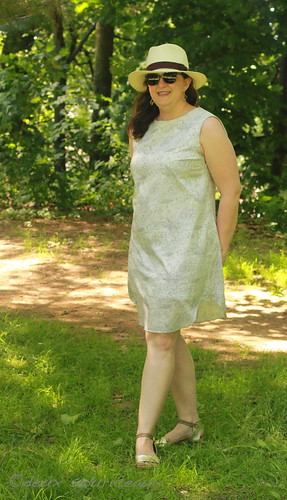 I skipped the muslin and went with one size smaller than my measurements to have a more manageable amount of ease and made a 3/8″ forward shoulder adjustment. I pretty much always need that adjustment with McCall’s. I traded the facings for an almost full lining (white cotton lawn). You can see where the lining stops in the pictures, incidentally explaining why I needed that lining in the first place… Oh, and I shortened it 3″ to keep it above the knee. 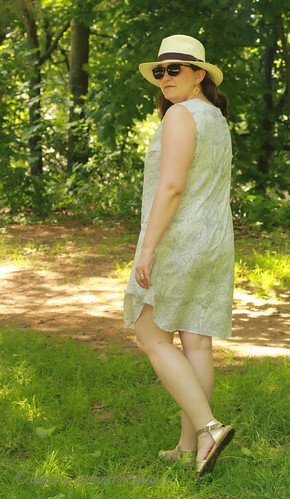 Once I’d finished, I noticed it was gaping in the next so I went inside and made two small neck darts. There was also way too much looseness in the back. I got out the Laurel I made ages ago. It’s a similar shape. I copied the Laurel’s back darts onto this dress. Fixed. That’s also when I realized I could have just used the Laurel pattern and modified the hem. 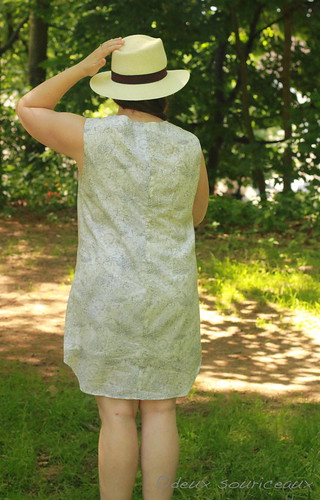 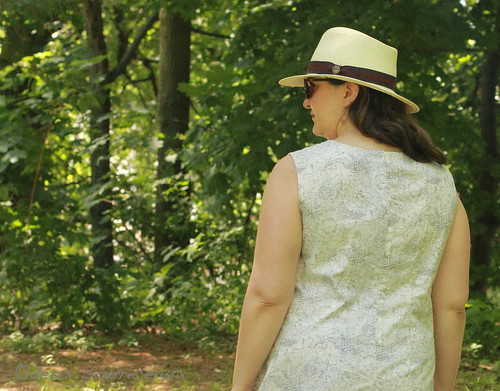 (I know, the darts are hard to see in the pictures.)

The only remaining issue might be the bust darts. They’re a tad short. And they look low in this picture because I’m not wearing the bra I used to check fit (it’s the one I would normally wear but it was in the wash). I don’t think the drag lines at the front are a fit issue, just the way this type of dress hangs? I don’t know. Thoughts? 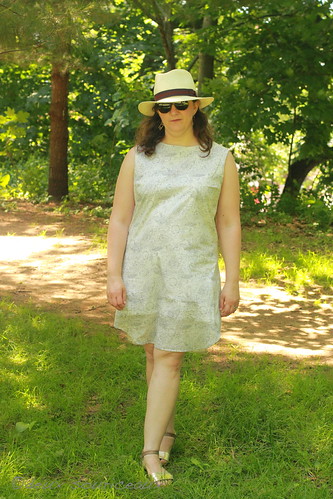 We took the pictures last Saturday. It was hot an sunny and I stood in open-ish shade. Could’ve chosen my spot better. The light that filtered through was vaguely green thanks to the leaves and I couldn’t color correct it. The fabric is actually white with grey flowers. They look like they were drawn on with a pencil.

PS: I skipped the muslins for all my makes this month. I just couldn’t deal with the work. All my seam allowances were 5/8″ so I had plenty to play with. for adjustments. Yes, that meant I couldn’t do much by way of dart modifications but I figured the fit wouldn’t be worse than ready to wear anyway. I was ready to give up on perfection to get through some fabric.