Posted on November 9, 2018 by deuxsouriceaux — 3 Comments

I have a knitting project and a sewing project to get pictures of. I seriously love both of them but modeling them… Ugh. But yarn doesn’t need modeling!

First up is some handspun. I’ve scoured the interwebs looking for the fiber and I can’t find it. I looked in my crafting stuff and can’t find the label. I’m not the type to throw it out until I’ve shared it but it’s nowhere to be found. Fine, I didn’t look very hard. I may have found it on Rav though. It might be Gale’s Art and it might be Blue Faced Leicester (BFL; it’s a kind of sheep). Anyway, there were 6 smaller braids of roving. Maybe 1 ounce each? They were the colors of the rainbow with some black blended in. So one red and black, one orange and black, etc. My one negative is that the yellow is too orange. The jump between yellow and green is too big.

I split all colors into two. One of the red halves was split into two quarters. I made two bobbins of singles. One going through the rainbow one half braid at a time. The other one started with a quarter of red, went through the rainbow, and finished with the last quarter of red. The plan was then to ply them together and have 12 distinct sections: red-red, red-orange, orange-orange, orange yellow, yellow-yellow, and on like that, finishing with red-purple. That way, I could make a cowl or infinity scarf and have a seamless transition between beginning and end. 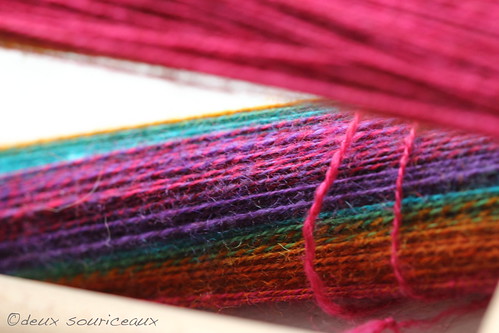 I started spinning this a year ago and lost my energy for it. I took it up again during the Summer and ended up spinning a little thicker. When I started plying, I quickly saw that I was going through one bobbin way too fast. There are a few spots where I cut one single and moved ahead to the next color but I probably waited too long before doing it. Some of the sections are much shorter than others. But it looks close to what I intended. 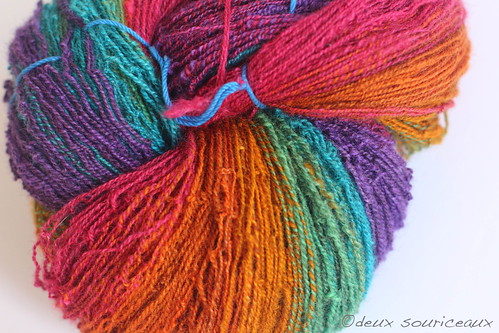 Can you see all the colors in my picture? I had a hard time capturing them all. The yarn is probably a laceweight. Oh, and I used my trusty Bosworth spindle. I love that spindle.

Next up, just some yarn I dyed. I made this handspun last year and I really wanted to use it in a sweater. I looked for a color I liked in a matching weight and sweater quantity. Not easy. It’s more of a laceweight (again). I ended up getting some undyed yarn at Rhinebeck last year. I think it’s an alpaca blend. (I have the tag lazies.) The color just didn’t make me happy. I’d taken my yarn around with me to find a good color match and was really stuck on a deep burgundy. It’s just a much more interesting contrast than a neutral. I bought some Jacquard acid dyes. One in a burgundy shade and one in navy blue. I was going to make swatches but realized I had just enough dye for my whole batch of yarn. Well, that and I realized it wasn’t the same kind of dye as what I used in school so I just had to go with the instructions on the jar. I figured I’d dye the yarn burgundy and, if I hated that, I’d just overdye it with the navy. Guess what? 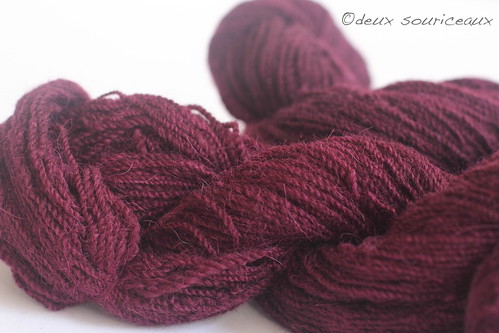 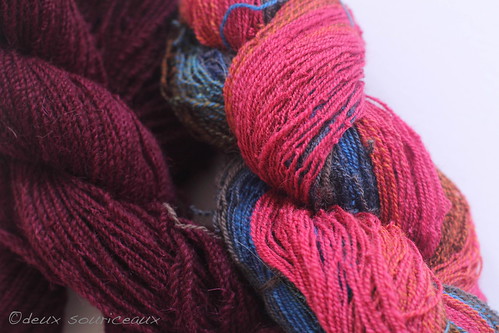 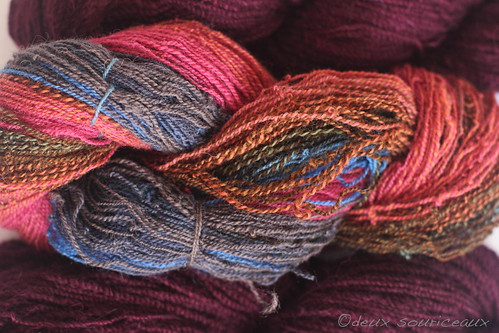 I love the burgundy! I wanted to get this sweater knit by Rhinebeck this year but umm, it’s laceweight. I was going to use my knitting machine to make it faster but it still isn’t set up. Next year? I’m still debating a pattern. Do I want a vertical entrelac or linen stitch up the front? Or do I want stranded colorwork? Shaping? Well placed ribbing to avoid having to do any shaping? I need to think about this some more…

And, finally, I’m spinning some fiber I bought at Rhinebeck last year on a spindle I bought at the same time. It’s Into the Whirled fiber, BFL with tussah silk. Color is Snow Angels with an Ood. It’s so soft and delicious to spin! I split it in half horizontally rather than vertically like I usually do. I don’t care about matching colors up on this one. Just let it do its thing. I’m focusing on spinning a little thicker. I do not want another laceweight! 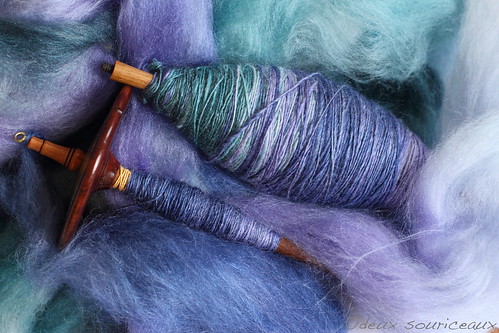