When Jalie’s new collection came out, my eyes zoomed straight onto the Simone Wide-Leg Shorts and Pants pattern. Those pants had E’s name written all over them. After I’d finished my two tops, I went to work on them. I’m still stash diving for fabric and found some denim blue fabric. I think it’s tencel but it’s been so long since I bought that I’m not sure anymore. It certainly drapes like tencel or rayon… 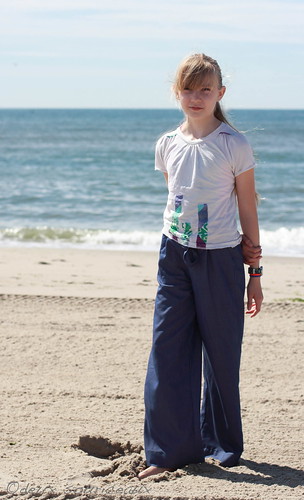 E measured at a size L in width, I think maybe even K. But I went with L for a little growing room. For length, she was closer to size O I think. Since the pants have perfectly straight legs, they’re super easy to lengthen or shorten. Besides, the pattern actually isn’t for the full length. You have to add length on your own when tracing the pattern. There’s a chart to tell you how much. I just added the length for size O and had enough for a generous hem. I imagine some might not like having to add length but it’s just a rectangle. Not exactly hard to do… 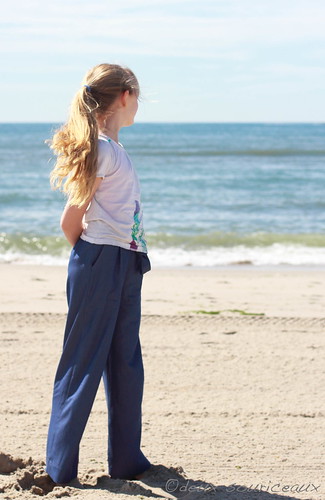 The pants went together pretty well. I was worried about the elastic because it can’t be adjusted after sewing (the ends are caught in the side seams, hidden under the front facing. I went with the size L length indicated in the chart and it was a perfect fit.

I had a hard time getting the front facing to turn nicely to the inside though. With the bulk of the belt loops in the seam, the facing just wants to flip up. I didn’t think that stitching in the ditch at center front would be sufficient so I also topstitched along the top to keep it nice and flat. 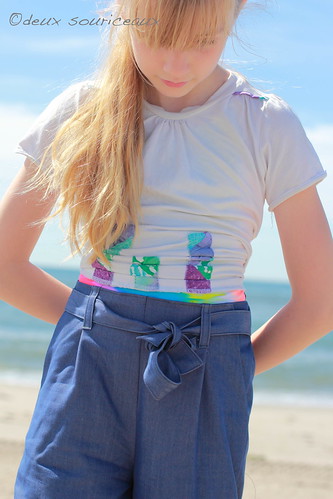 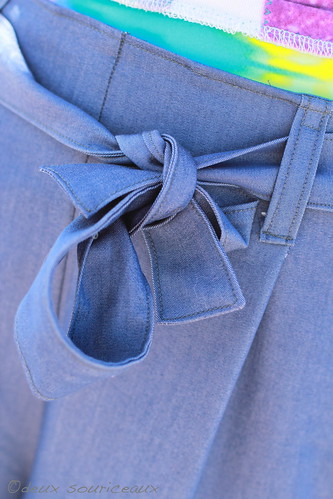 While I was at it, I topstitched all the way around, catching the elastic in the back. I skipped stitching down the center of the back waistband though. I didn’t think the elastic would twist in the casing because I used the no roll kind and I also had that topstitching along the top. 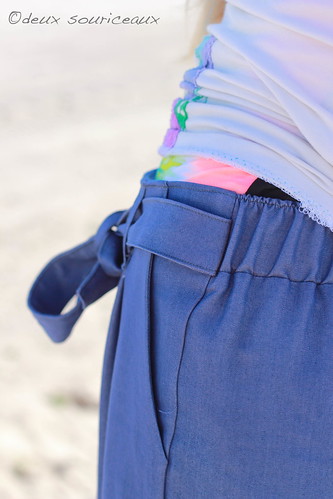 E wore her pants as soon as they were done. Two days in a row. The second day was when we went to the beach. I had planned on making her a top to have a whole outfit to photograph but I was afraid she’d get her pants dirty at the beach. So pictures first thing when we got there. They’re a little blown out because of the harsh light and trying to get the fabric’s color right. 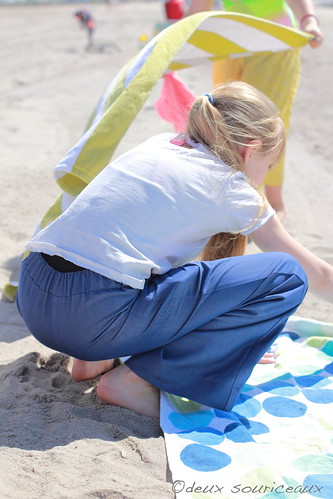 I wasn’t crazy about the fabric’s color at first. I love blue but this was lacking something. But then, I worked with it and loved the end result. I think there’s a lesson there for me about pretty fabric vs useful in my wardrobe fabric. 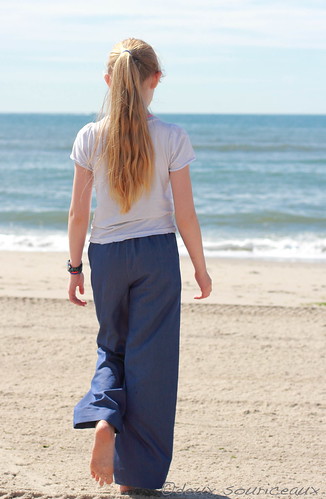