I never wanted Valérie’s queen of hearts costume to get complicated and expensive so I didn’t want to make a dress.  The first part was a tutu to be worn over a black bodysuit.  This next part is a tabard.  Actually, it’s not exactly a tabard but that word sounds better than “felt sandwich board”.

Looks better when she’s standing up…

-white crystals and rhinestone applicator (or any embellishment you would like)

Step 2: Cut out the front and back pattern out of white felt twice (once for front, once for back). Transfer dots to wrong side of pieces.  Cut out two of each of the hearts out of red felt.  You will have 6 hearts.

Step 3: Pin 3 hearts to each piece of white felt, smallest at the top, biggest on the bottom.  Glue the hearts to the felt.

Step 6: Glue one side of the velcro squares to the free end of the 4″ elastics and the other side to the black dots on the black piece. 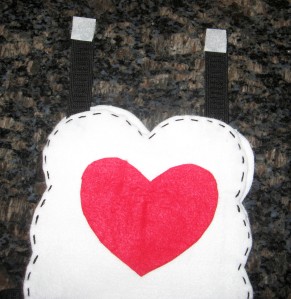 Detail of the velcro on the elastic.

Step 7: Using a running stitch, embroider along the edge of the front and back pieces, catching the elastic and velcro when you reach that part. 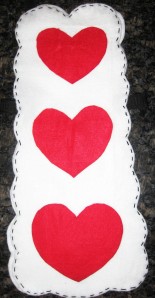 With the running stitch. It’s kind of hard to see but the elastic is there at the sides.

Step 8: Embellish the front hearts with the white crystals.

Notes : Everything that is glued could be sewn by hand or machine.  Something other than felt could also be used but then, you may want to interface the front and back pieces so they have more body.  You don’t want this to be stiff like cardboard but it needs to have body.  And have fun with the embellishments! Embroidery around the hearts could be very cute.  I chose crystals because I wanted a little of the shimmer from the tutu on the tabard.  You need shimmer to be a proper queen!  This pattern could also work well to make a playing card costume.  Make a plain rectangle instead of a scalloped front and back and use only one size for the hearts.