When Ajaire kindly asked me to post about knitting machines, I couldn’t refuse.  And then, I started thinking about what needed to be said.  Quite a bit actually!  I realized that if I tried to put everything into a single post, it would be way too long.  Hopefully, two will be enough…

First, a disclaimer.  I will NOT be talking about industrial knitting machines.  Those machines cost a fortune and aren’t meant for home use.  I’m going to explain home machines.  I believe there used to be quite a selection of them but very few are still being manufactured.  Silver Reed seems to be the only company still making machines.  I have their SK840 model.

I’ve had to borrow some images off the internet to illustrate because I couldn’t always get semi decent pictures.  Clicking on any image will take you to the source.

These three websites have a wealth of information on knitting machines if you want to delve deeper.  Any information I give about another machine than mine likely comes from one of these sites:

So, what exactly IS machine knitting?

I’m going to go ahead an assume that everyone reading this knows what hand knitting is.  That thing with the two needles and yarn…  When you knit, all your stitches are lined up on your needle and you knit one stitch at a time.  When you use a machine, each stitch sits on its own little needle like this one.

The machine has what is called a bed of needles.  A bunch of needles neatly arranged in a row.  My machine has 200 of them.  Like this. 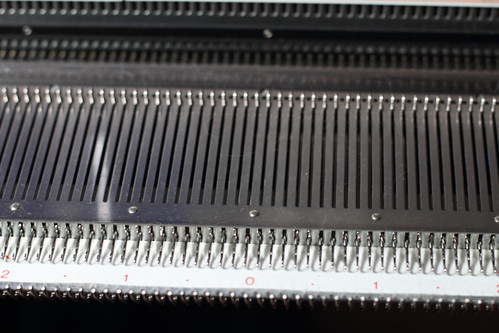 To knit the stitches, you have to move a contraption that we call a carriage.  This is mine. 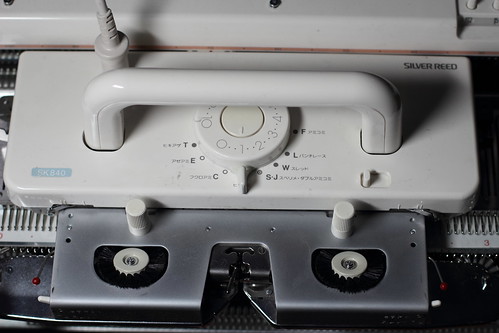 What the carriage does is move the needle forward so that the stitch pushes the latch open and goes behind it (toward the butt).  Then, the carriage lays the yarn between the latch and the hook and pushes the needle back.  When the needle is pushed back, the old stitch comes forward (actually, it’s stationary; it only moves forward relative to the needle).  As it comes forward, it pushes the latch closed.  The closed latch traps the new yarn on the needle while the old stitch moves over and off, creating a stitch.  It’s a purely mechanical process.  As you move the carriage back and forth, the machine creates stockinette stitch (or jersey for those more comfortable with sewing speak).  The wrong side faces you. 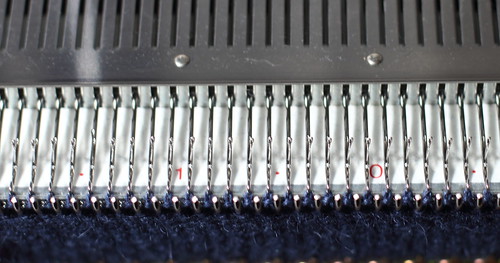 I know it’s terribly hard to see but can you tell there are stitches there? And can you see the little bumps from the stitches right below the ones on the needles?

And that’s the basics of knitting with a machine.

Beyond the basics – the main bed

Some machines will only knit stockinette.  Any stitch pattern you want to make will involve hand manipulating stitches.  It can be done but it can also get tedious.  This cabled skirt I made?  All those cables had to be done through hand manipulations.

Other machines will have an integrated punch card reader.  The punch cards tell the carriage what stitches to knit differently.  That could mean that the punched stitches are slipped, tucked (like a slipped stitch but the float will be knit along with the slipped stitch on a later row), knit in a second color…  What the carriage does will depend on what you selected on the dial.  I’ll come back to the dial in a sec…

Finally, the most expensive machines are electronic.  They can be used without power but then, they turn into those machines that only knit stockinette.  When you have an electronic machine such as mine, you will usually also buy software to use with it.  I use Design-a-Knit which comes with a black box that takes care of communication between the computer and machine.  That black box does the same thing as the punch card reader.  It tells the carriage what to do with the needles depending on what you selected on the dial.  Now, let’s get back to that dial…

Here, look at mine again.

The inner dial with the numbers sets the tension.  Smaller number = higher tension, better for finer yarn.  The outer dial is set at “0” which means stockinette, no pattern.  On the right, you can see the S-J which stands for slip stitch and jacquard (I’ll talk about jacquard in the next post).

See the floats where the slipped stitches are?

W is for weaving, L is for punch lace, and F is for fair isle (two color knitting). 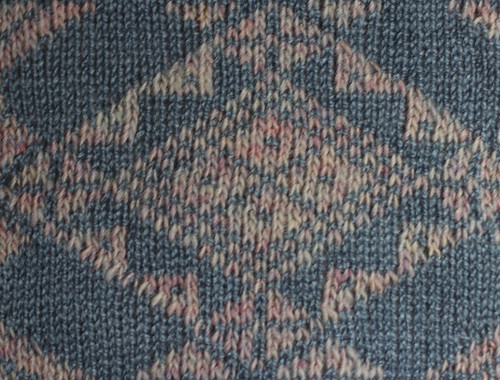 On the other side, T is for tuck.  C and E are for the next post. 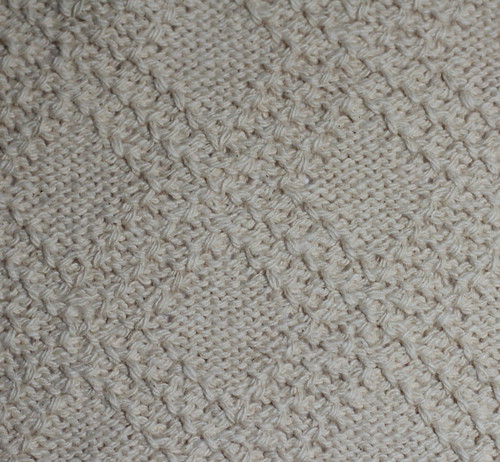 See how the floats are knit into the fabric here?

Oh, I should mention what weaving and punch lace are shouldn’t I?  It’s been a long time since I’ve done either of these…

Punch lace is sort of like fair isle.  It uses two yarns but instead of alternating them, it uses one of the yarns all the time and the other only according to the pattern.  That creates a sort of lacy effect.  It isn’t true lace but there are areas that are more sheer.  I think it looks more like dévoré than lace. 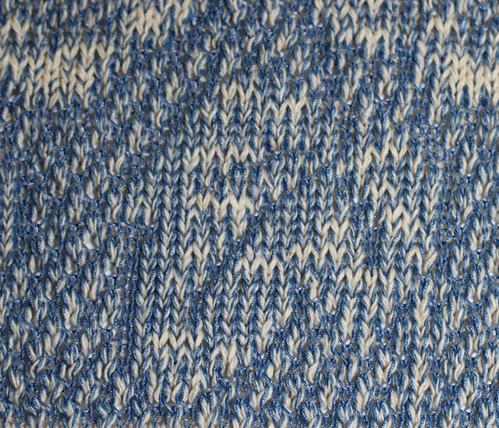 I know it’s a little hard to see but can you tell that there are areas where the cream yarn wasn’t knit? And that the blue yarn is always knit? These patterns usually look better when held up to the light.

Weaving is done on a reverse stockinette background.  The wrong side of your jersey if you prefer.  There’s these little hooks on either side of the carriage.  See that red ball?  There.  That’s the spot where you hook your weaving yarn and hold it with some tension.  As you move your carriage across the knitting, that yarn is just kind of laid across the needles and gets caught in the stitches without being actually knitted.  It can create some cool surface designs.

And that’s it for the main bed!  There’s actually quite a bit of cool stuff that can be done but there are other attachments that will allow the machine to do even more.  Coming up in the next post: the ribber, the yarn changer, and the lace carriage.