This one.  This one. It gave me a bit of trouble though I do like the result quite a bit.  It’s my second make of the month and it was supposed to come together much faster.  Only I kept having to change my plans. 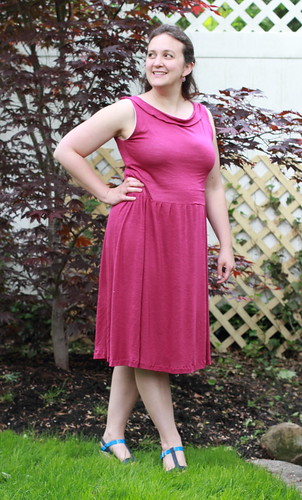 The pattern is Moneta by Colette.  I used some rayon slub jersey I’ve had in my stash for a while.  I originally wanted to use a cotton/spandex jersey from Girl Charlee.  White with black flowers.  I really wanted one kind of like this one. But I didn’t have enough.  I thought I could use that jersey for the skirt and collar.  It would have looked nice, I’m sure!  It just didn’t get me excited, you know?  I will make it up with the cotton/spandex but I’ll get some plain black cotton/spandex jersey for the skirt and collar.  When I’ve sewn some of the stash down that is.

So pink/purple rayon slub jersey.  I like the texture of it.  I had just enough yardage.  In fact, I think I could have squeezed the sleeves onto it.  But if I was going to make it in a solid color, it had to be sleeveless.  So with lining.  Not enough yardage to use the same fabric for lining…

I ended up making a muslin out of some cream bamboo jersey.  I was between sizes.  Again.  So I did the larger of the two as suggested.  It was fine at the waist but too big at the chest.  Or rather, it gaped at the armholes.  I ended up taking it in a full inch on each side.  That’s 4 inches off the total circumference!

I felt so unsure…  I’m not used to making such a huge adjustment to a pattern.  And some of the techniques were so foreign to me!  I told myself this would be a muslin.  If it wasn’t wearable, oh well.  In the end, it actually turned out pretty!  It’s comfortable and great for running around after kids.  It’s far from perfect.  My stitching in the ditch could be much better and the collar could have used some light interfacing.  But I like it a lot! 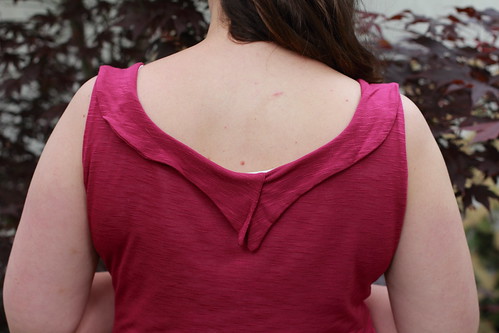 Can you see the cream lining there? Oh and the points of the collar normally cross a bit in the back, like in the pattern pictures. I suspect Mr. Mouse thought they weren’t supposed to do that and adjusted them.

Next time, I’m going down a size. 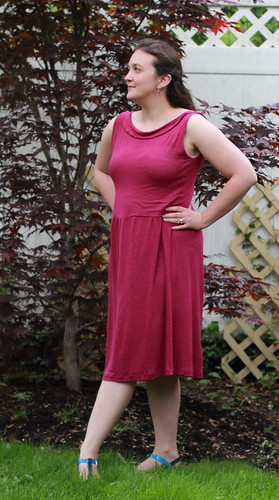 3 comments on “Moneta for Summer”