Home › Creating › Sewing › Made for Kids Month Wrap Up

Made for Kids Month Wrap Up

Okay, I admit it.  I fell down a little in the last part of the month.  I was just so tired.  Having souricette 1 at home meant that I got almost no time to myself and I felt myself getting brittle.  Even on the days where the girls were actually wearing handmades, I could hardly be bothered to take a picture.

But the project.  I had it in mind and I wasn’t going to let it go.  We made shibori!

I tried two different stitching techniques on mine.  The chevron-ish parts are an overcast stitch (whipstitch) over a fold.  The bigger the fold, the bigger the chevron.  The rest is a running stitch. 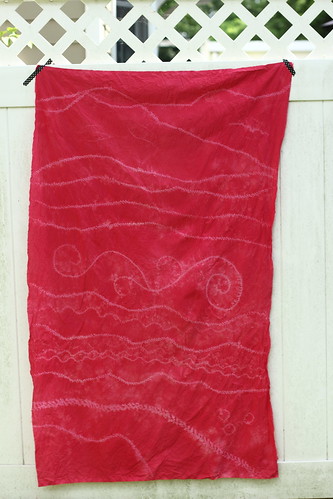 The color isn’t quite right here.  Below is better. I’m quite happy with how my swirls turned out.  They’re kind of my signature.  That’s what I end up doing a lot when I doodle. I see all swirl shibori in my future. 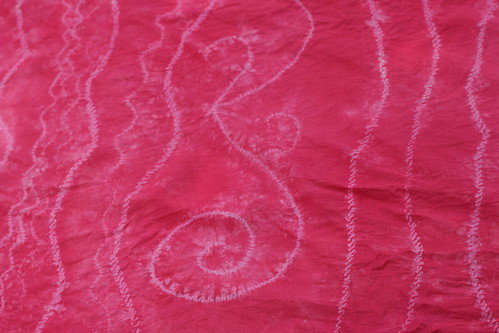 For the girls, we did marbles and wood balls held in the fabric with small clear elastics as well as good old rubber bands.

I did the work on souricette 2’s piece as she instructed.  She was more involved at the beginning, handing me marbles and elastics and telling me where to put them.  After a bit she just gave me a pile of marbles and rubber bands and walked away.  Whenever I asked her where to put the marbles or rubber bands, she would just point at the piece from where she was standing.  5-10 feet away.  So I just went along a little randomly.  I tried to put a lot in so that there would be more pink. 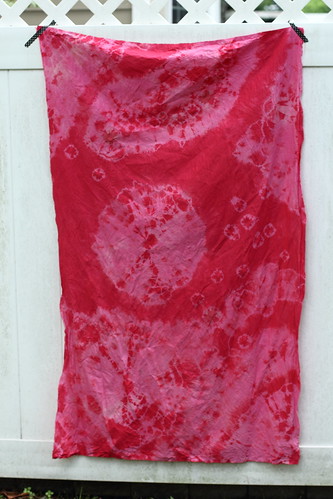 Souricette 1 did about half the work on hers herself.  I showed her the piece I had dyed before.  She wanted to know how I’d made the big circles with the little circles inside them and I told her.  So she tried to do the same thing.  She had a hard time getting the rubber bands on tight enough so I helped with that.  After a while, she got sick of it and asked me to finish up.  I just added more rubber bands so the two circles with smaller ones inside that you see?  Her work! 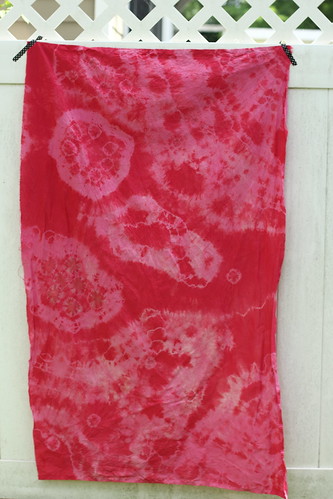 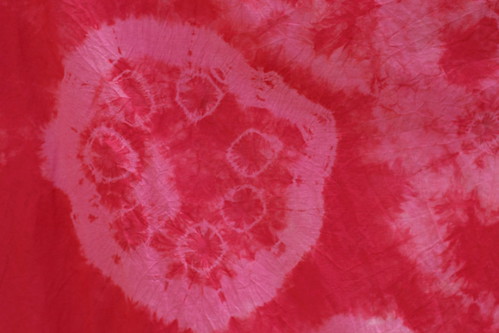 I dyed the pieces red while the girls were sleeping (1.5 % concentration of carmine red).  The next morning, they got to see how they turned out.  That afternoon, souricette 1 was supposed to help me overdye the pieces with a 0.5% solution of magenta.  She was asked on a playdate and preferred that to hanging around mommy and her dye pot.  Huh.

So more of a mommy project, I guess.  But the girls had their input and I’ll be using their pieces to make them something. Skirts?  Maybe souircette 1 will even do some of the sewing?