I had two goals for Tour de Fleece: finish spinning and plying my alapaca and spin enough blue faced leicester to try out navajo plying.  So how did I do?  Let’s see… 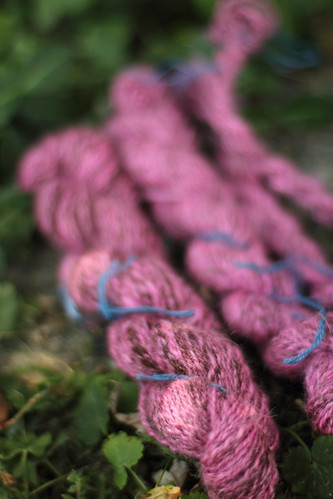 I like it well enough.  It’s only my second handspun yarn so I can’t be too hard on myself.  I only wish I’d thought of seperating the brown from the pink so that I could ply a proper barber pole.

I forgot to do the picture with a penny for scale thing but I would say most of it is more of a laceweight.  I put it next to some sock yarn and it’s a bit thinner.  And I have no clue how much I have!  I’m thinking of making a simple garter lace scarf with it.  Maybe I’ll get lucky and be able to make two and give them to the girls.

And then, here’s where I’ve gotten with the other fiber. 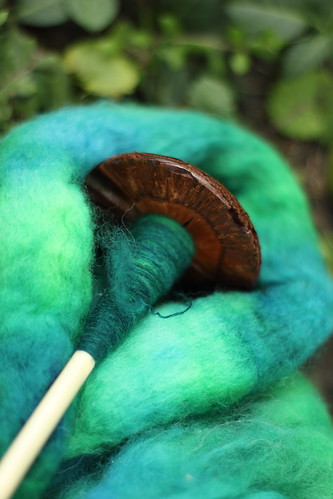 After I got a bit done, enough to try the navajo plying really, I decided I wanted to get all the fiber spun before plying.  No clue exactly what this will become but I’m in love with the colors.  It’s mostly green with some blue.  The blue disappears as I’m spinning but it keeps the green in the cool blue-ish zone that I love. Really pretty.