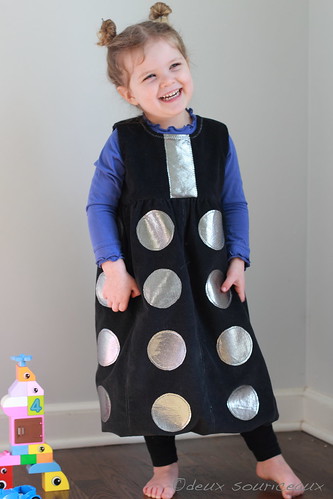 It’s Dr. Who month over at Friends Stitched Together.  And Project Run & Play has a different format this year: one pattern or tutorial per month. I wanted to participate in both so badly but I had no clue how I was going to swing it.  And then Michelle from Falafel and the Bee combined both sew alongs into one.  Smart move.  She encouraged me to steal her idea.  I said I was going to make a Tardis dress out of blue wool leftover from my Peony.

Evidently, I got sidetracked.

Details.  I used the tutorial from PRP for the skirt portion and added a cropped Tinny bodice, sans sleeves and lined (seems to have disappeared from the shop though, weird). 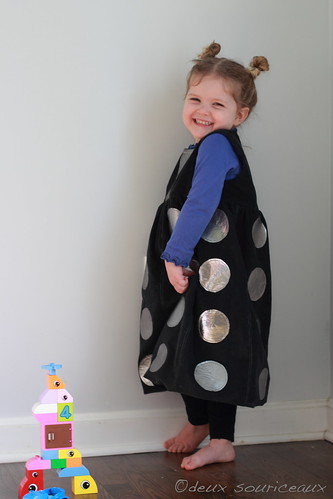 I made 6 panels for the skirt instead of two.  Each seam is outlined with silver topstitching (hard to see on the dark corduroy).  I appliquéd 4 silver circles onto each panel.  My mom actually brought that fabric back from France for me.  A remnant of the fabric my aunt used to sew a costume, I think.

I skipped the waist elastic and just gathered the skirt onto the bodice.  Blue invisible zipper in the back.  Tardis blue lining because, duh. 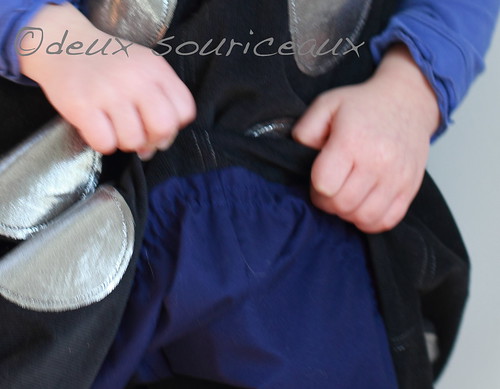 I added a stripe of the silver fabric to the bodice because I wanted to.  Also, Daleks have these panels that give a striped effect.  I only did one because I didn’t want to turn the dress too costumey. Silver zigzag topstitching along the sides of the stripe and along the neckline. 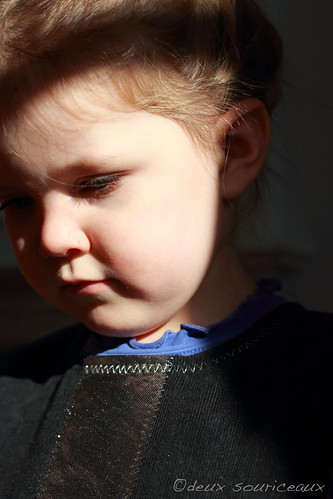 I had this great idea for a Dalek hat.  I had it all planned out in that head of mine but I realized it would take me forever.  For something that would cause a fight between souricette 2 and I.  I would try to get the hat on her, she would rip it off.  Repeat until one of us gives up.  That would be me.  She always wins the hat fight. I did two little buns in her hair instead, trying to give them the Dalek shape.

The girls and I worked hard at creating a city out of Duplos for the Dalek to exterminate.  It didn’t quite work out.  Oh, it was built and it was destroyed.  But I didn’t get the effect I was looking for.  Possibly because this is what I got when I told her to look angry. 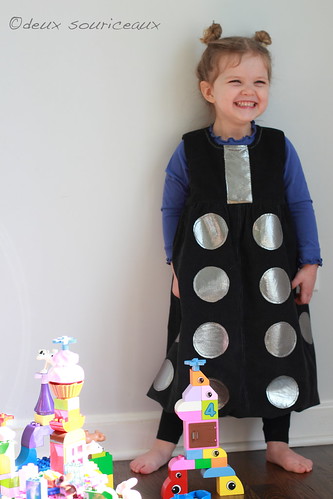 She likes her dress at least.  I’m calling her my little Dalek from now on.