Finally got around to taking pictures! 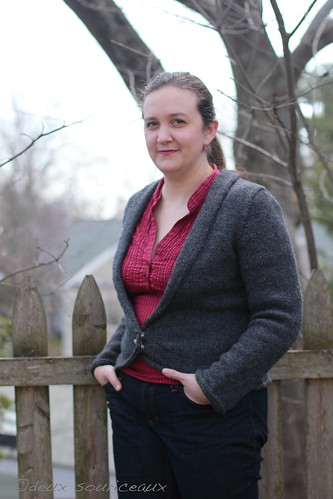 This is the Equestrian Blazer by Kate Gilbert.  I used Naturally Naturelle 10 ply yarn (yes, I do think the name is a little ridiculous) in grey.  It’s 100% wool and it’s seriously on the itchy side.  I could actually feel the itch right through my blouse!  Not enough to bother me but well, you’ve been warned.  Other than that, it’s actually a decent wool for outerwear.  It’s everything wool is supposed to be: springy, good stitch definition… 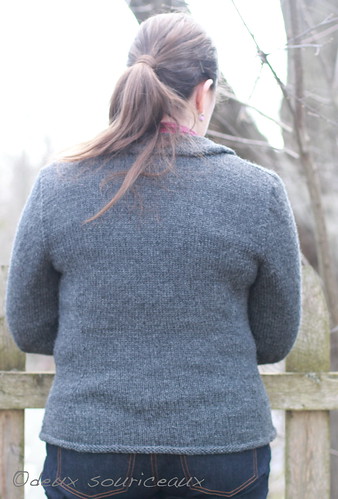 Despite the itchiness, I like wearing this blazer.  It’s warm and fits well.  Though if you look at the pattern picture, it looks like that curves up a little more in front.  The only negative is that I find the V too deep.  I keep wanting to pull it closed a little higher.  I was actually afraid of that when I saw the pattern but I couldn’t resist.  Mr. Mouse suggests I just add buttons to close the blazer higher.  It isn’t meant for that but since the handknit fabric is so stretchy, it could work. 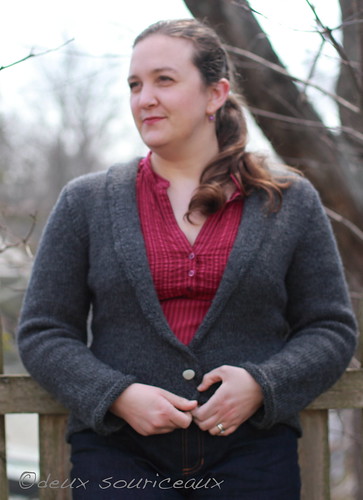 I knit the pattern as is except I skipped the buttonhole and used snaps instead.  Oh!  That may be why it doesn’t curve as much as the pattern picture!  I actually used two snaps so that there would be less pulling (though you can see it still pulls on the snaps in that top picture).  I need to think about some more but one thing I might do is remove the snaps and make buttonholes on the sewing machine.  I would stabilize the area with grosgrain ribbon beforehand.  Some experimenting is in order…  Fun!