Still Sewing For Me

I admit I’m starting to get burnt out on personal sewing.  Not so much because there’s nothing else I want to make.  There is!  It’s just…  I’m trying to reduce my stash so no buying. That seriously limits what I can make.  I have no fabric I love in dress or pants quantities.  In fact, I’m working on a dress in a fabric I’m not quite sure of right now.  In a pattern I’m not quite sure about either.  I figure if I hate it, it’s a muslin.  And if I like it, I get a dress.

In the meantime, I made a blouse. Well, two of them but I don’t have good pictures of the second one. 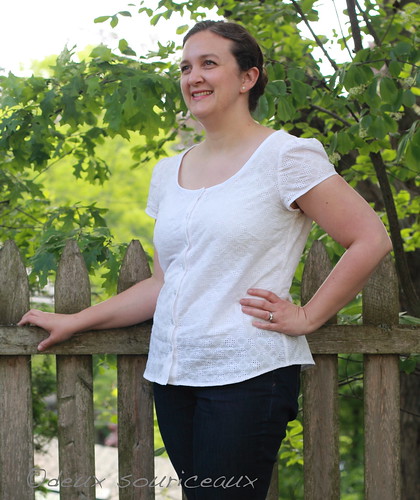 This one is New Look 6104. I made view A in size 16, skipping the ruffle.  I just don’t get along with ruffles.  Hate sewing them and always feel silly in them.  It’s just a straight size 16, no adjustments whatsoever.  Can you see in the picture that the fabric is a little sheer?  I’m wearing a camisole underneath to help with that.  I did french seams everywhere, even when I set in the sleeves.  So the inside of the blouse looks great too.  Why do I always forget to get pictures of the inside? 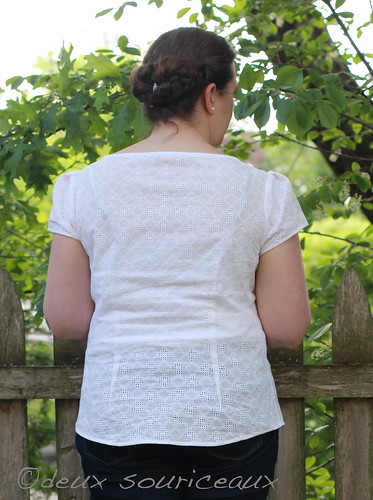 No gaping at the back!

And look at this fabric. 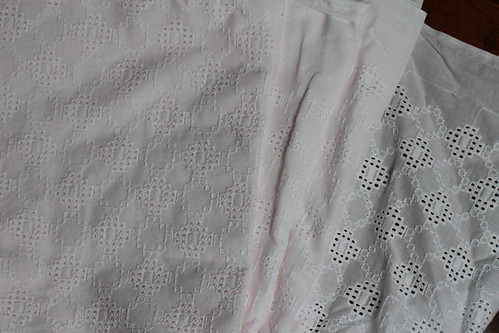 Isn’t it pretty?  I’m not the only one who sees a bit of reddish cast, am I? It’s so odd.  I can’t see it when there’s only one layer of fabric but when it’s all folded up, definitely there.  At first, I thought some other fabric had run during prewashing. I washed it with two red and white printed fabrics.  But it’s too uniform for that.  I just hadn’t noticed before, I guess.  Anyway, that meant that using plain white cotton for the buttons bands might make that reddish cast more apparent.  I cut them out on the selvage where there was no embroidery instead.  I wasn’t able to get my bias strip for the neck binding there though so plain old white cotton there.  The color difference doesn’t really show, does it?  Or it can be attributed to my skin at least. 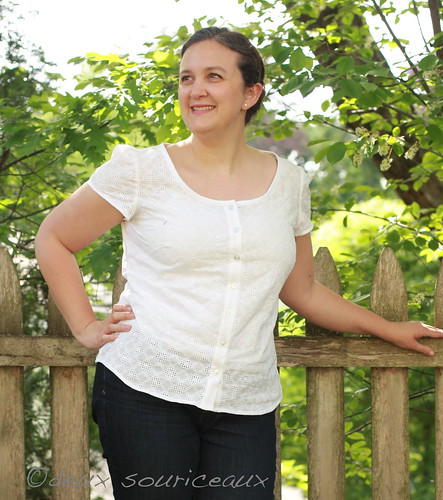 I love this blouse so much!  And I have plenty of this fabric left over.  Since it’s cotton, I’m thinking I might dye it another color and make another blouse (in another pattern).  The girls might even get a little something out of it!  Yes, I bought a little too much…

11 comments on “Still Sewing For Me”