I’d forgotten about this fabric.  It’s navy cotton eyelet with a scalloped selvage.  I’ve had it for at least two years.  I fell in love with it on, uh, fabric.com, I think?  I had to have it so I bought two yards of it.  And then, the search for a pattern was on.  It had to have a straight edge at the bottom so I could use that scallop but gathered skirts don’t like me.  The fabric waited.

Seemed being the operative word.  Well, it actually is perfect for the fabric.  Just not perfect for me.

I cut out view C.  That would be the shorter length. I muslined the small and it was too tight in the arms and hips. So I made a medium and screwed up on the length (ended making the longer one).

It turned out that the medium was still too small in the hips but was a bit too big in the bust.

I knew I would never wear it so I picked it apart and recut it.  Not enough fabric to just start over you see.  I removed an inch from center back and center front (so a total of 4″ around), gradually down to 0 at the hips.  If I’d had enough fabric to recut new pieces, I actually would have removed that inch all the way down and then added in more space at the sides for the hips if that makes any sense.

Anyway.  I sewed it up, leaving the side seams open at the hips for breathing room. Not that I breathe through my hips or anything… It isn’t the best finishing but I really wanted to keep my interior french seams.  So I just finished the vents with bias binding cut from the same fabric as the neckline’s binding. (That would be plain old cotton of the quilting variety.) 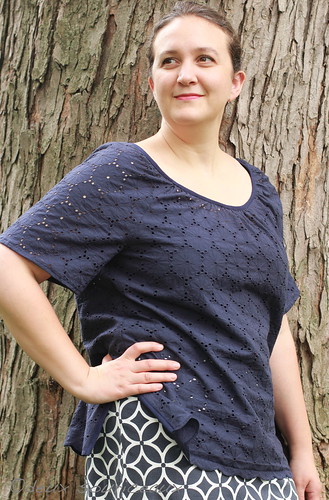 I gathered the neckline and adjusted it until the fit seemed right.  I tried to secure it there and not mess it up while I was sewing the binding on but uh… yeah.  Way wide.  Not to the point that I must absolutely do something about it but it’s likely that I’ll gather it up a bit more.  Someday. 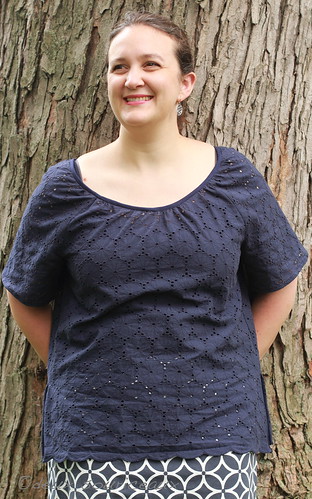 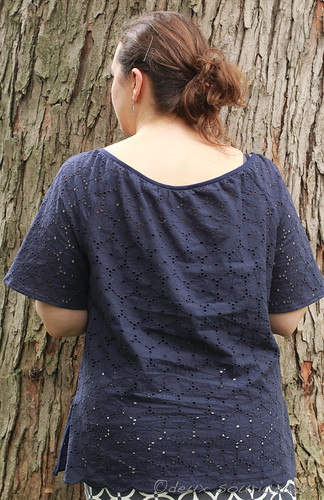 And.  You can see that it could use some waist shaping, huh?  Sure, it’s supposed to have a lot of ease but it’s a bit sack-ish right now.  If I go back and redo the gathering, I may try to take in the waist a bit.  Someday. 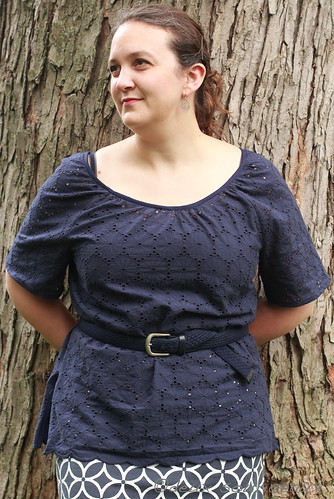 In the meantime, I’m belting it and calling it good.