Posted on September 3, 2015 by deuxsouriceaux — 6 Comments

It’s called Hydrangea but to me, it’ll always be Monet’s water lilies, the one from MoMA. The fiber is Blueface (that’s a kind of sheep) from Gale’s Art, bought in Rhinebeck almost two years ago. I liked the colors.  Pink, purple, blue, and green, which, yeah.  Hydrangea is fitting. (Some of these pictures are phone pictures and the colors are off. The finished yarn pictures have better color.) 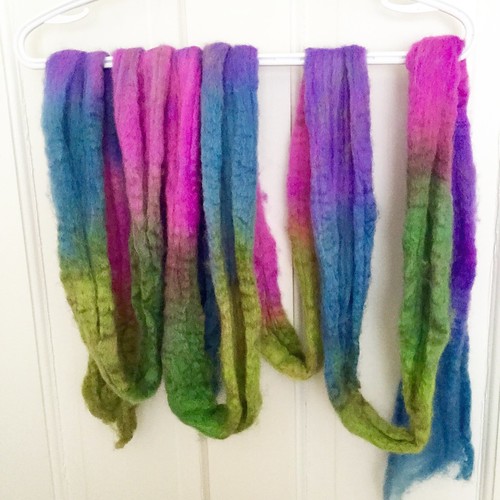 When I bought it, I decided I needed to preserve the color changes.  Chain plying seemed like the best solution only I had never done it.  So last year, during Tour de Fleece, I started on some green roving that was meant to practice said chain plying.  I think it was even Blueface too but I’m not sure.  Anyway, I never finished it.  So I finished it this year! 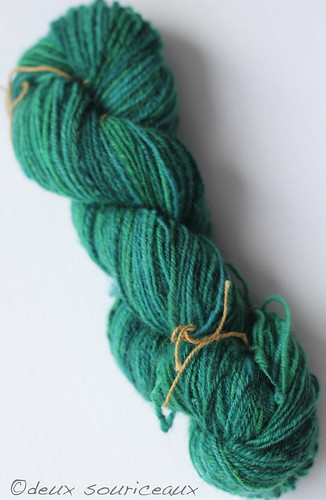 (Side note: I know I never mentioned this year’s Tour de Fleece while it was happening but that’s because I was busy moving. I did Instagram it though…)

And then I started, on the Hydrangea.  I wanted to spin it in one go, drafting out the whole thing so that I would have loooong color changes.  But the fiber had gotten mothed, just a little.  I gave it the hot water treatment and I think it might have felted a teeny tiny bit.  It was still very spinnable but I just could not draft it at its full thickness.  I thought I might split it in four and ended up splitting it in three.  Still thinking chain plying… And I spun my singles… 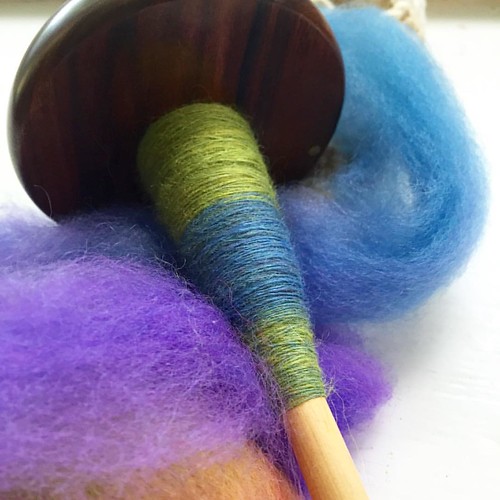 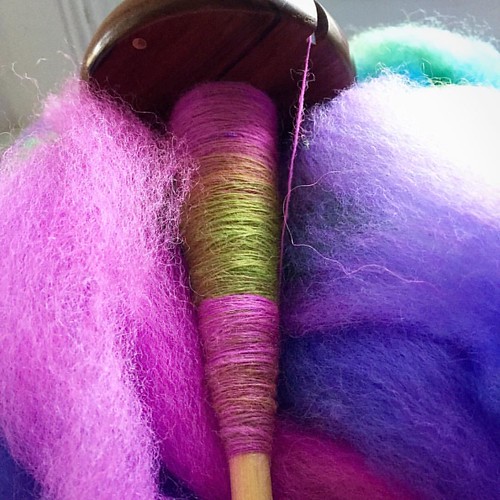 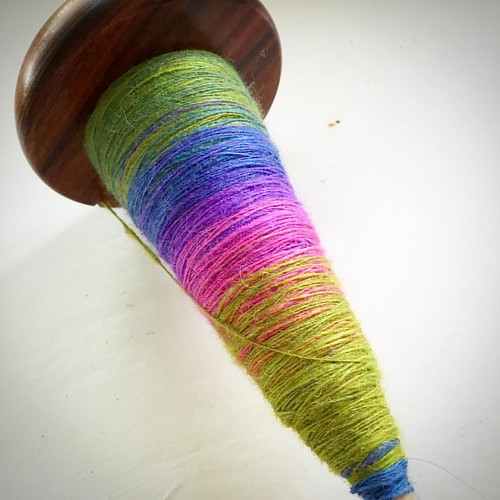 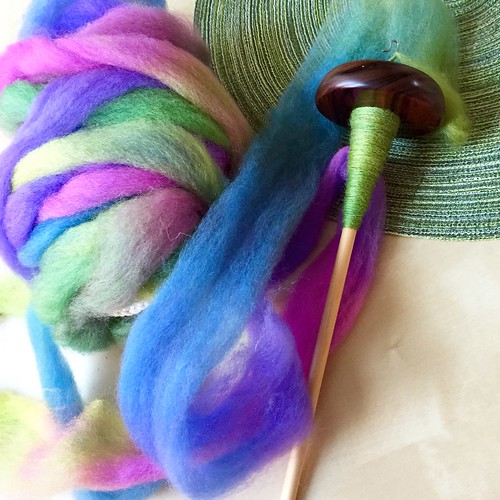 And spun some more… 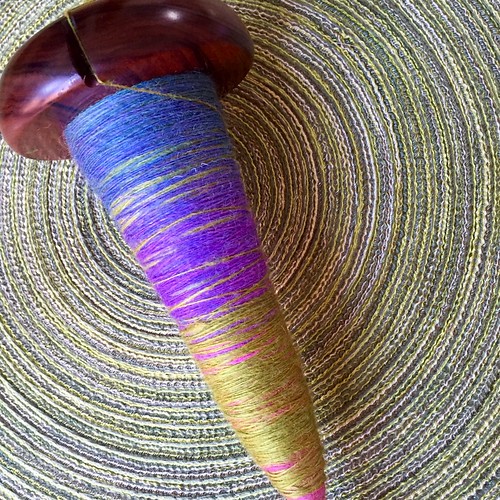 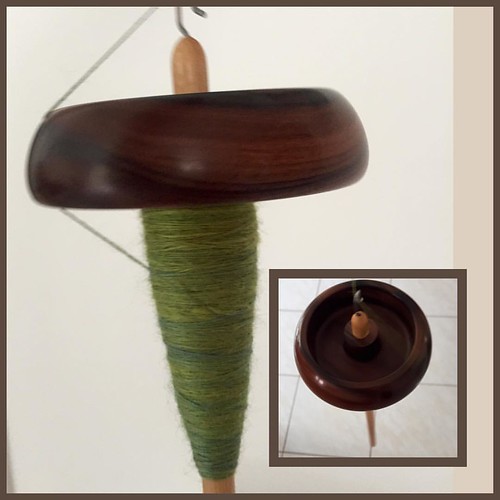 Tour de Fleece was over but I kept spinning… 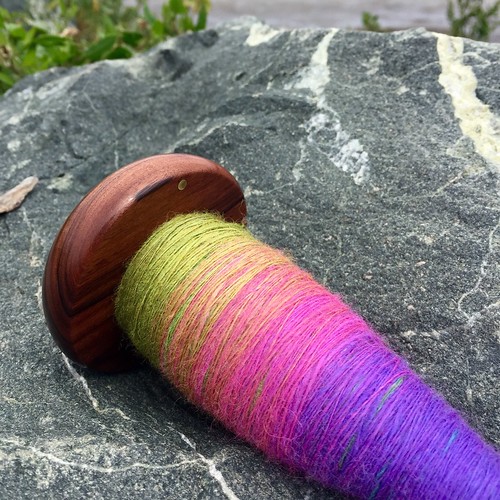 And I had it all. But something had happened along the way.  I saw how the colors played together when I was winding them onto the spindle.  It reminded me of the water lilies.  So pretty.  I knew my three balls of single weren’t quite the same size and the colors would blend.  I was hoping to get that impressionistic look in my finished 3 ply. 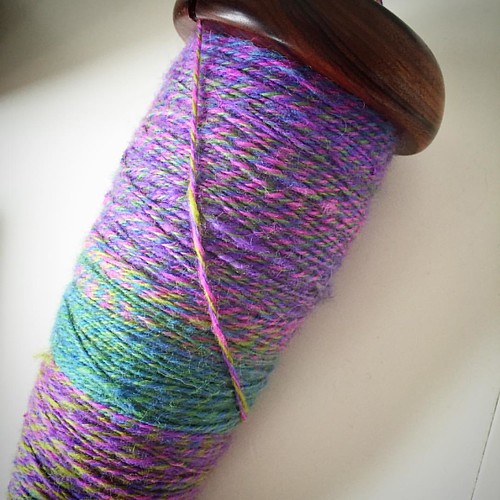 I kept plying until I ran out of one of the balls. 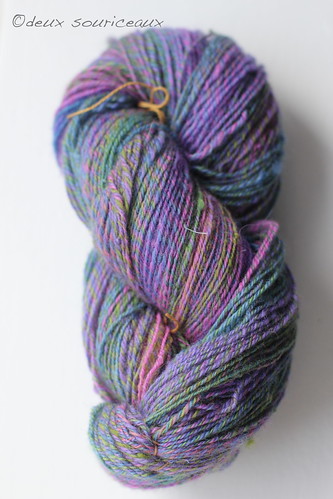 Isn’t it pretty? In some places, the same color met up for a more uniform color but most of the time, it’s a blend of two or three different ones.  The effect is a little more muted, blended. 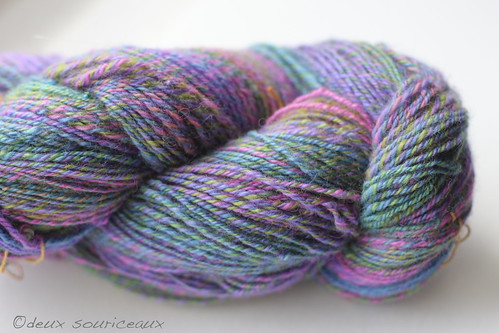 I practiced my chain plying on the two leftover balls.  I figured it would give me roughly the same thickness as my three ply.  Bonus: I got to compare the effect of both types of plying on the colors. 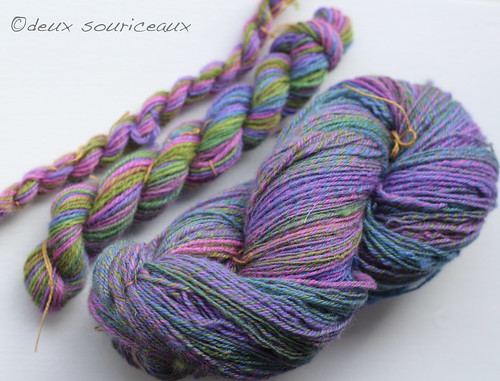 Do you see how much brighter those smaller hanks look compared to the big one? 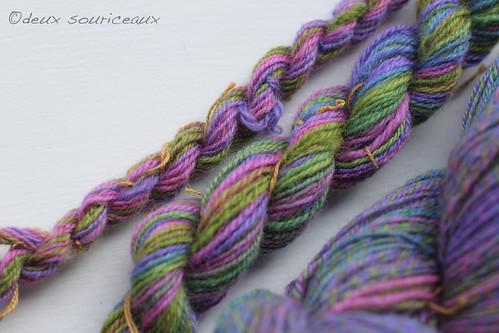 And now… what to knit with this beauty…  I’m thinking cowl, scarf or mini shawl…  What would you make?