I always sign up for Kids Clothes Week. This year, it falls at just the right time for costume sewing.  E wants to be young Maleficent and V wants to be Unikitty (from The Lego Movie).  I started with the Unikitty costume because V stays home with me on Thursdays so I get to take pictures.

I’m not a huge fan of sewing costumes.  They can cost a lot of money and time to make well but then, they aren’t worn very often at all.  Luckily, Unikitty isn’t that hard to make wearable.  She’s a pink cat with stripes at ankles and wrists, a blue horn, and a blue tail. 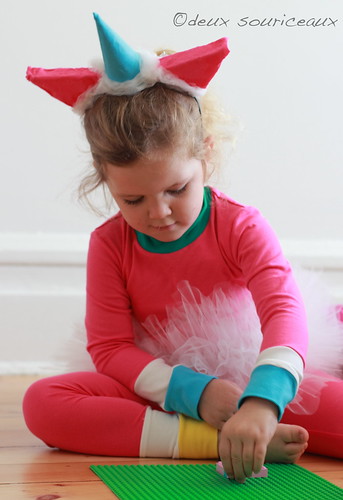 For the body, I made the basic leggings from the Dressage pattern (Jennuine Design) and a mock turtleneck T from Jalie 2805. I added color blocking at the wrists and ankles to match Unikitty’s stripes.  All of them are 2″ long.  The blue and yellow stripes are actually cuffs.  I had no desire to hem…  I was worried V would hate the mock turtleneck but, as you can see, it’s actually nice and loose on her.  She doesn’t feel choked at all (always an issue with my kids). All the fabrics are Robert Kaufman laguna jersey (cotton-spandex).  It’s a nice quality and I’m hoping that V will wear her leggings and T-shirt as regular clothes after Halloween…

The head piece would have work better if I could have made a hood but V insisted on a headband.  I cut up a styrofoam cube into 2 triangles and glued pink fabric on top.  I guess I could have sewn up a cover instead to make it neater but I was feeling lazy.  The horn is a cardboard cone from the art store covered in blue fabric.  I hot glued everything to the headband and used the tulle to hide the join and make the whole contraption stronger. 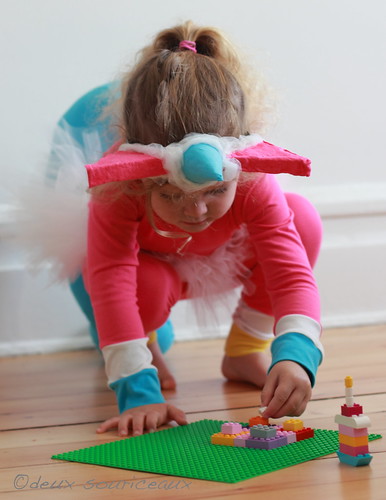 And the tail. Unikitty doesn’t actually have a tutu but V wanted one.  And the tail is tied to it.  The white tutu is short because it isn’t meant to be a skirt.  It’s just meant to dress up the elastic.  I covered most of the elastic in knotted strips of white tulle and left about 4″ at the back.  I tried to create a tail using 3 colors of blue tulle but I wasn’t satisfied.  I ended up drawing a tail and cutting it out of the blue fabric.  I meant it to look a bit lego-ish so I joined the two curved pieces with 3″ strips. So that it would be like a 2.5″ high tail shaped cylinder, you know?  I actually measured how long those strips needed to be but then I screwed up the sewing.  I’d planned a spot at the top to leave open for stuffing but, ummm, I missed it when sewing my strip on.  So my top strip ended up too short and the bottom one too long (I moved it down to have an opening). And then, rather than removing the tulle tail, I stuffed it into the tail and added batting.  I handstitched the opening closed around the elastic so it’s very sturdily attached.  It isn’t exactly perfect (ha! what an understatement!) but V likes it.  Loves it, in fact!  The tail is huge on her but it’s light and comfortable. 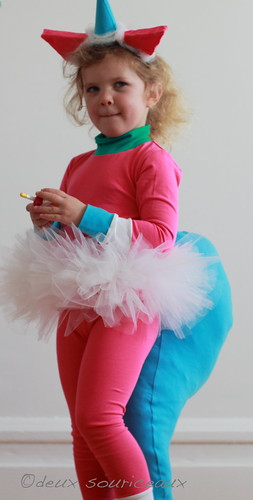 And that’s Unikitty!  Next up on the sewing table: Maleficent-the-young-one-from-the-movie-with-Angelina-Jolie. 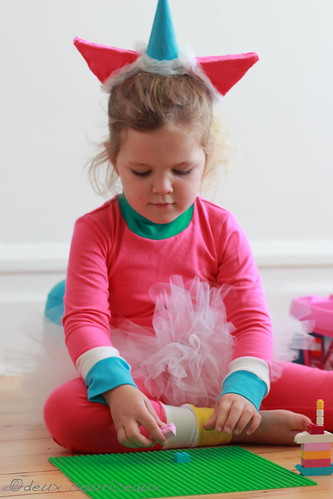