I should really learn not to try anything on right away when I’ve just finished it.  I’m almost always a little disappointed right then.  A day later, and I’m quite happy. Ha! Like I would be able to wait.

Okay.  Technical details.  Pattern is Sewaholic Alma Blouse. Fabric is a cotton and silk blend from Mood (I was told to dryclean it but I handwashed it instead; it survived just fine).  I made view C in a size 14 graded down to a 12 at the hips.  I made no effort to match the pattern, except to keep the light areas at roughly the same height on front and back. I also skipped making the thread chains at the sides so I wouldn’t have floppy loops at my sides when I choose not to wear the belt. 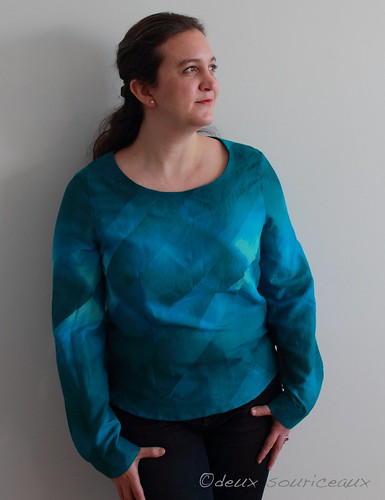 I made a muslin of the bodice only and decided to move the center front darts in 1/2″.  I also extended the side bust dart point 1/2″.

I think I should have taken the time to muslin the sleeve.  I don’t mind that they’re long but I’m getting the impression that the shoulders are a little too narrow on me?  Or is that slight pulling at the shoulder just normal with a fitted blouse?

I didn’t notice on the muslin and I think putting in a sleeve would have alerted me to the potential issue. 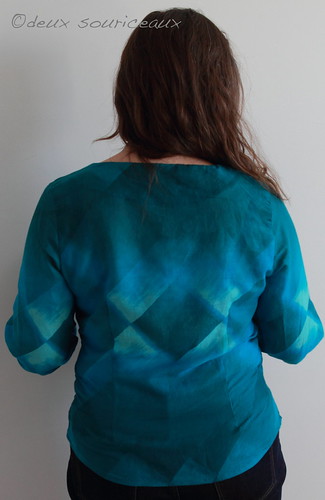 Though the back looks okay. Maybe it’s just normal. Maybe I’ve just gotten so used to loose tops and knits that I’d forgotten what fitted non stretch wovens were like.

Other than that, I’m quite happy with the fit.  I know some seams look a little puckered.  I swear I pressed them as I sewed! I just didn’t give them a final press before I took pictures.  I was feeling lazy.  Or rather, I just wanted to get the pictures over and done with.  I don’t think I’ll ever enjoy selfies, even with a fancy camera and calling them self portraits. 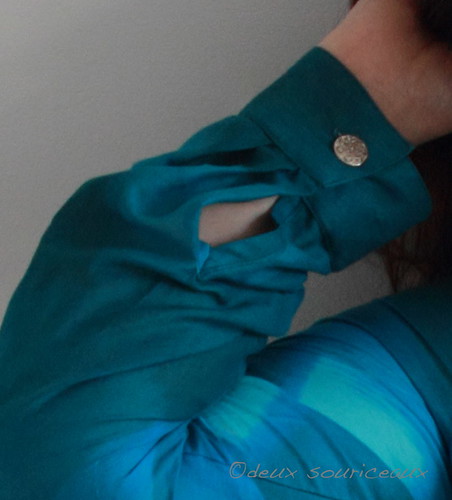 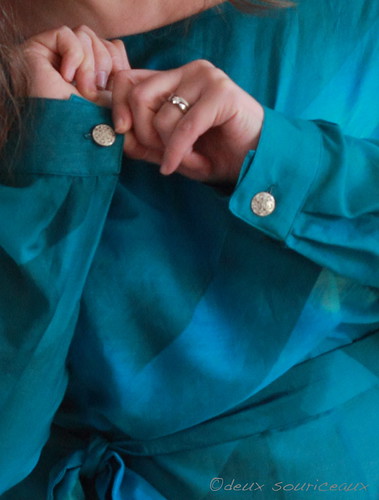 Yeah, nice natural posing here to show off the cuffs. /sarcasm (But my cuffs are quite pretty!  Up close, you can see where my edge stitching isn’t perfect but hey, good first try, right?)

Anyway.  The fabric is lovely.  It’s a blend but it feels like silk.  It was slippery to work with (lots of pins!), delicate (I used my smallest needle, a 65/9, but that still felt big for this), and while it responded well to pressing, it didn’t hold a crease well.  Except where you don’t want wrinkles.  It likes to hold on to wrinkles.  Trying on the blouse, I was afraid I was going to rip the fabric!  It just felt so fragile and light.  I’ve since figured out how to get the blouse on and off without feeling like I’m pulling at it.  I used lightweight interfacing in the facing and cuffs to support the fabric but not stiffen it too much.  I decided to add a strip of interfacing to the seam allowances on the zipper side as well to help support said zipper.

When I bought this fabric, it didn’t seem sheer at all.  Then I started assembling the blouse though and I realized I was wrong.  It was too late to change construction techniques and besides, it didn’t look like it would be sheer to the point that you’d see the facing and my underwear through it. 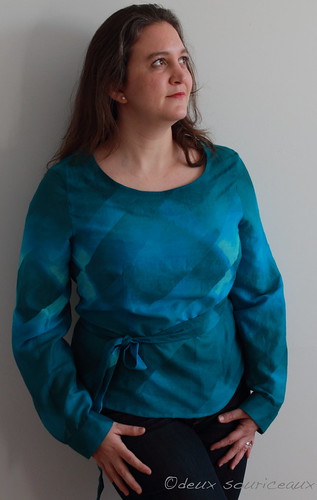 But it isn’t too bad.  The facing showing doesn’t bother me.  It’s just a little bit.  And the shoulder and side seam allowances aren’t really visible.  The bra…  Well, I could almost pass it off as a cami but I think I’ll just resign myself to a nude bra (some of the shots have the dark bra and some have the nude one; I only realized you could see my underwear after reviewing the pictures and rushed to take some more). 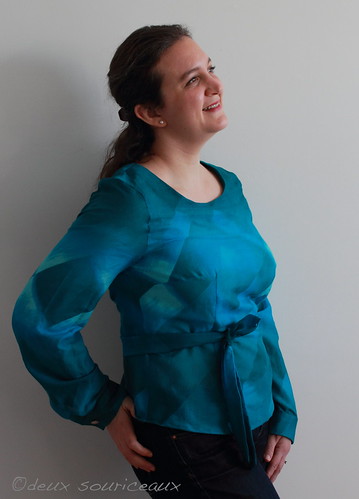 And hey, I have enough cotton-silk fabric leftover for a cute summer tank of some sort!