This project took me forever.  Thanks to my Rav project notes, I know I started on September 14. In 2014.  It was supposed to be quick. E was supposed to have it for that Winter. At least I’m just in time for her to wear it a little bit this Winter? 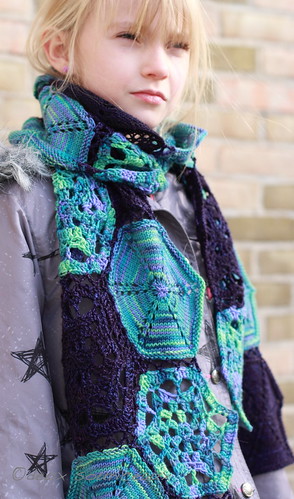 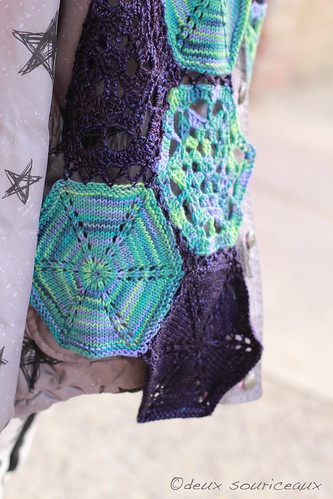 The pattern is the Apiculturist Scarf by Miriam L Felton. It was written for a worsted weight yarn but I had fingering reserved just for E and I figured a thinner yarn would size it down a little.  That would be Blue Moon Fiber Arts lightweight Socks That Rock yarn.  The color is Oceana (seems to be discontinued).  The contrast yarn is MadelineTosh Tosh Sock in Raspberry Cordial. E had originally picked out a periwinkle yarn but it just wasn’t quite right.  There’s some periwinkle in the Oceana and the two shades just didn’t work together.  So last Summer, we went to pick another yarn.  I wanted to go darker to provide some contrast.  I wanted some sort of blue but the store (Brooklyn General) didn’t have what I wanted.  I thought this purple shade would work because the undertones are on the cool side.

The pattern has you assemble the hexagons with the main yarn but I didn’t have enough left over so I used the purple.  I like it like that though. 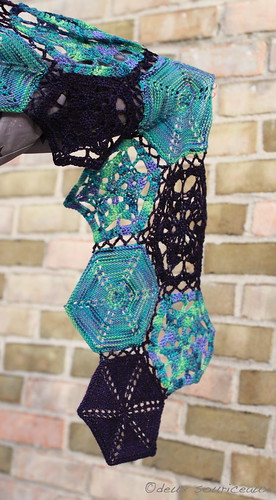 I have to admit that I wouldn’t let E pick this pattern again.  There isn’t anything wrong with it.  It’s just that the thing is modular.  22 hexagons to make, each with ends to weave in.  That’s 44 ends.  Then, assembling them into two long columns produced 40 more ends to weave in.  The pattern isn’t clear when it comes to crocheting the two columns together.  Maybe I was supposed to break my yarn after joining a pair of sides.  I don’t know but I didn’t.  I just sort of managed it as I could without breaking the yarn.  After weaving in 84 ends, I was not going to add more than 2 to that tally! 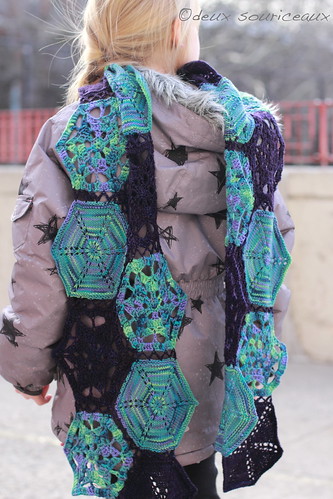 Still, it’s pretty, isn’t it?  It’s snugly and warm for E and it has enough length to last her a good long time. 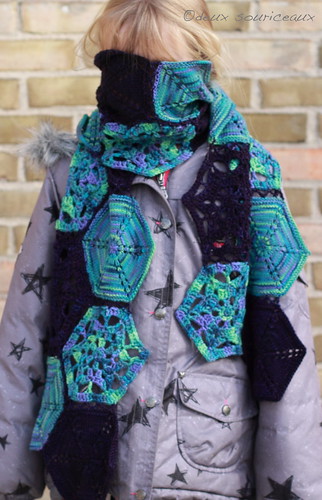 And now, I really should figure out what to make V with the yarn I picked for her. It’s also BMFA lightweight Socks That Rock but the colorway is Happy Go Lucky. With a name like that, it was meant for her!  I just need to figure out what she would like… 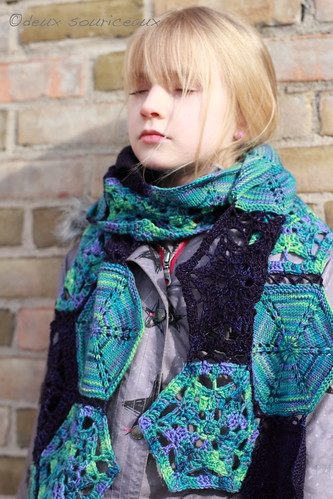