Home › Creating › Knitting › On the Needles

I took a little break from knitting after finishing E’s scarf.  Did some spinning and drawing instead.  But now I’m back at it.  I’ve been meaning to make a new snuggly blanket for the living room.  And I wanted to use up sock yarn remnants but not have a million pieces to sew up.  I found the Ten Stitch Blanket pattern (it’s free!) and it was perfect.  I queued it up and there it stayed while I knit other stuff.

It’s such a great project for striping or hand painted yarns.  No pooling at all with such a small stitch count. 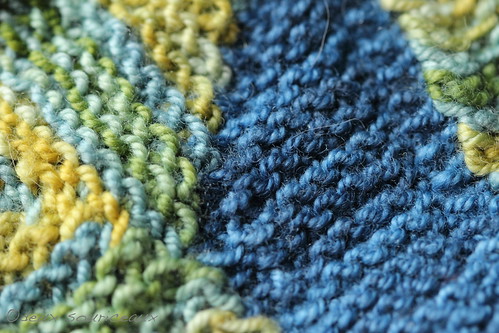 And I’ve seen awesome projects using a bunch of different colors.  Colors that don’t look like they would work together but that end up looking great.  That’s what I’m hoping for with my remnants.  Right now, I confess I’m having doubts. 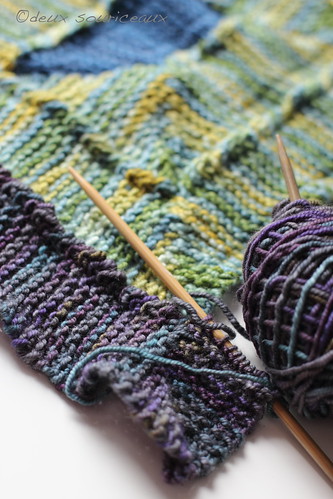 It’s sized for a large mouse at the moment and it looks okay.  Later though… There’s this greenish-blueish-brownish yarn that’ll be going in at some point.  And also some bright pink.  And the leftovers from E’s scarf (purple and turquoise shades). This is so far out of my comfort zone…  It’ll work out in the end, right? Right? 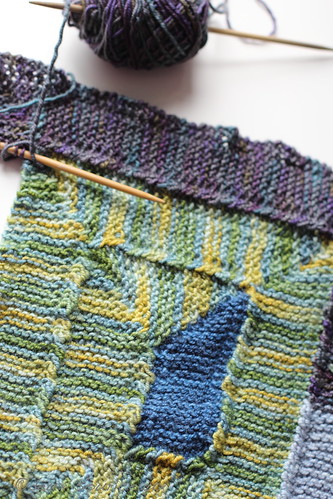 2 comments on “On the Needles”