Home › Creating › Sewing › Not So Quick

After I finished my Granville shirt, I wanted to sew up something quick and easy.  I actually have a stack of quick and easy patterns that I want to sew up.  I’ve even matched them up with fabric!  I picked the Mesa dress by Seamwork (Colette).  It seemed like the perfect little tunic/dress to wear over leggings right now.  I was going to make it out of purple ponte from Urban Sew with faux leather accents.

Now, I already knew I had some issues with Colette’s sizing for knits.  I go for my size and it always ends up a bit big.  This time, I actually muslined the smaller size with some left over ponte.  I only had enough to do the top part but I figured that would be enough.  I ended up going back up to my prescribed size (the large). I sewed it up.  Just the main stuff to see what it looked like before finishing. And I just wanted to throw it out.  Or rather, throw it into the repurpose pile. That ponte is soft, thick, and spongy.  A lovely fabric that I was not willing to waste. (Though it didn’t press well so I topstitched some of the seams to get them nice and flat.)

What was wrong? The neckline was too wide but I figured I could tighten it up with the neckband.  There was something wrong at the underarms too.  This picture isn’t great but can you see? 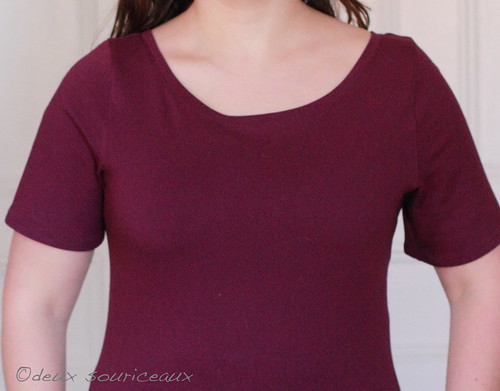 There’s this extra fabric at right at the underarms.  It looks like it needs to be taken in right there.  M doesn’t see anything wrong with it but it bothers me.

And finally, the length. You can see from the pictures of the pattern that it’s quite short.  I’m quite short too so I figured it would hit more of a dress length on me but still be nice and short. Before hemming, it hit at the knee.  Now, I confess this one is my fault.  I should have measured the paper pattern against me to see if I wanted to shorten it.  But I forgot.  Or rather, given the pictures, I didn’t think it was necessary.  But it was too long.  And I couldn’t shorten it without losing those side vents.

I just wanted it gone.  When the Mesa dress came out, I actually signed up for Seamwork just to get it.  It seemed like the perfect little T-shirt dress.  I felt like I’d been had.  After a while I came to my senses and decided to make it work. I shortened it to the length I wanted and hemmed.  I made faux leather facings that I brought to the right side. 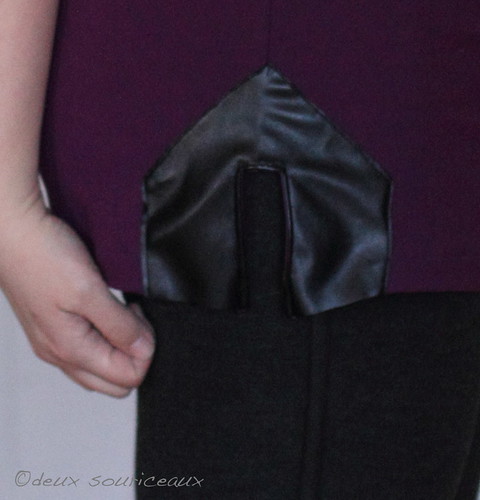 I know they look really bad in the very grainy picture and well, they’re far from perfect.  I had a hard time getting them to sit right in order to top stitch them down.  And topstitching them down was hard.  I even had to forget about stitching them down along the hem.  But when I’m wearing the tunic and moving around? I’m totally fine with how they look.

I took off over an inch of length neckband to get that neckline tighter and closer to the body.  It worked but it still feels like it’s going to fall off my shoulders.

The other bothersome thing is that it keeps riding up and becoming shorter than I wanted. 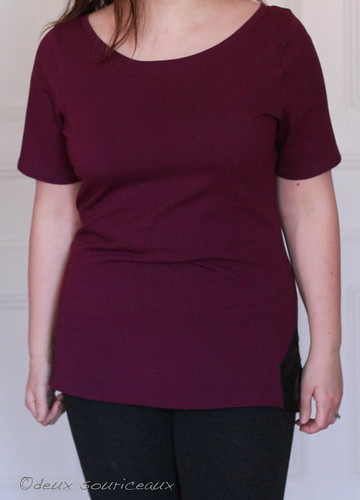 That part of it is due to the negative ease at the hips I think.  And that’s not even me making the pattern up a size too small.  I made my size, remember? My hips are actually at the bottom end of that size’s range.  The negative ease is planned in the pattern.  But then, as you move, the fabric just wants to ride up to where it won’t get pulled.  I don’t know if I’ve explained it well but it makes total sense if you think about it.  Which I apparently didn’t…

So what now?  Well, I do know I’ll keep wearing this tunic because I like it and it’s comfortable. But the pattern?  I’m unsure.  Can I fix it up enough to turn it into a TNT? (Tried and true.) Or should I just copy the features onto a better fitting basic tee like Jalie? And should I be afraid to try more Seamwork patterns? I’m not a subscriber anymore and while some of the patterns seem interesting in the line drawings and descriptions, I’m just not sure the patterns are good enough to justify the cost… 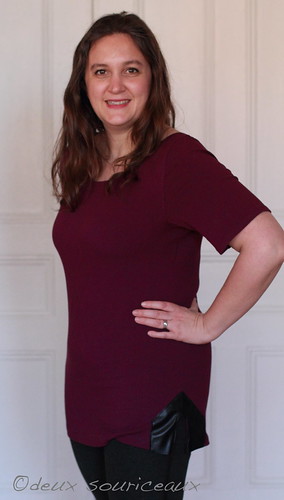 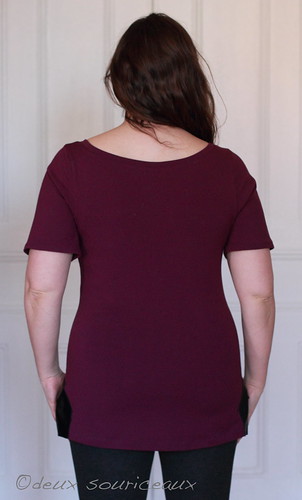 PS: Yes, I know.  I still haven’t managed to get self portraits right when indoors.  And I feel shy outside because NYC = lotsa people. Also, I’m trying hard to pose in a flattering way that also shows the garments well.  Hopefully, I’ll get there someday…

3 comments on “Not So Quick”