Home › Creating › Sewing › If Summer Ever Gets Here

If Summer Ever Gets Here

I’ll have something to wear…

The girls both had Spring break last week.  I had these pants cut out and partially assembled before and I hoped to finish them during the week.  Nope.  I don’t know what happened.  I wasn’t expecting to get a lot done but I have been able to sew a decent amount with them at home in the past.  This time, by Friday, the lack of alone time had me in a constant frazzled state.  Saturday, I had to let M take the girls with him (they bought flowers and planted them) and I managed to finish the pants.  At the end of the day, M took some pictures but he was feeling a bit sick and low on energy so we stopped before I was happy with the results.  So, yeah, pants are in the shadow and that’s all I’ve got because it’s been cloudy and rainy ever since. 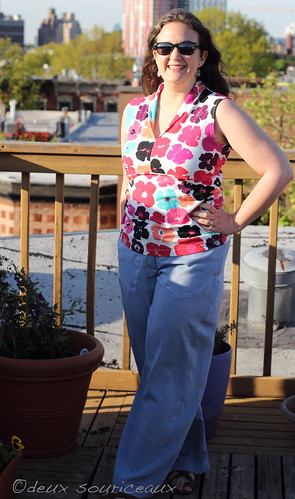 The top is Jalie 2682, made from Art Gallery knit. I’de been meaning to try these knits for a long, loooong time but could never find a print I liked in stock.  It might be my favorite cotton-spandex knit.  We’ll see how it wears but right now, I love it for its softness, recovery, and thickness.  I want to make the girls leggings out of it to see how it wears. 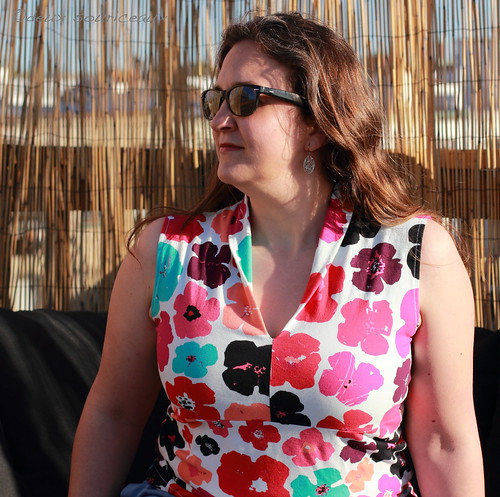 Anyhow, I made a size V like I always do.  It’s two sizes below what the size chart says but I like the fit, especially when I go sleeveless.  The one time I made a size X, it was way too baggy at the underarms. Even here, I had to take in about 1/4″ at each side seam.  There was little gap at the front.  A small dart would have been perfect but I didn’t want to mess with the lines.

The pants are the Marrakesh Drawstring Pants by Hot Patterns. I’ve made up a couple of their free patterns before and finally bought some a few months back.  I have these store bought rayon pants that I love wearing in the Summer.  They’re fluid and comfortable, fitted at the hips but with wider legs. The only thing I don’t like about them is the pockets.  They have flaps that stick out a bit. This pattern was exactly what I wanted: wider legs, fitted hips, a bit more ease at the waist.  And the drawstring is two pieces of fabric sewn to an elastic.  The elastic doesn’t show on the outside but it makes the drawstring so much more comfortable! I got some rayon chambray (Robert Kaufman) to make them up. The drape was exactly right. And the texture is so cool! 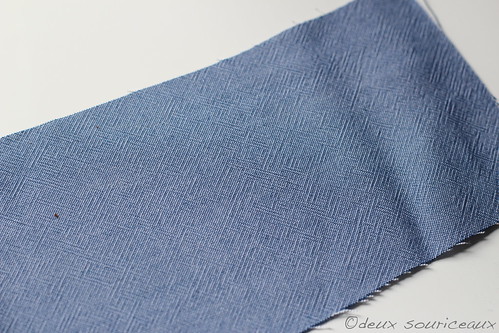 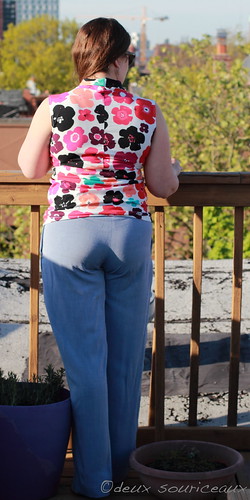 You can see a bit of snugness there in the back.  It doesn’t feel too tight and doesn’t impede movement so I want to wait and see what happens after a day’s wear.  The fabric may relax and then I’ll be happy I went with the smaller size.

Speaking of fabric, I had a hard time with it.  It’s very slinky and moves out of shape when you look at it wrong.  I only thought of using spray starch once it was too late…  So there’s some wonkiness at one of the pockets (the right hand one).  I might try to stitch it down a little. And next time, I doing patch pockets instead.  And adding patch pockets on the back. 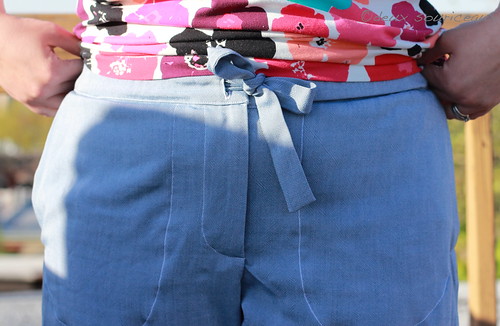 On the waist, you can see the drawstrings really close to the center.  Right where the right hand drawstring is, there should have been a button.  I don’t know what happened.  I checked the pattern markings against the waistband to see where they would end up and everything seemed fine so I went ahead.  And there.  I used a sew in snap instead.

Otherwise, the drafting is good except for a missing notch on the front leg pattern.  The instructions for the zipper were a little confusing.  I mashed them up with the instructions in the Sewtionary but next time, I’ll just follow the instructions from the book. The crotch curve was a bit odd too.  There was an angle on the back curve and some weirdness when I sewed up the inseam.  It seems to work but I think I might try to switch up the curve next time, just to see. 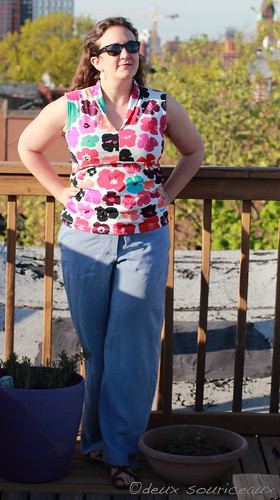 Now, onto work on my current dress obsession…

5 comments on “If Summer Ever Gets Here”