This picture.  V didn’t want me to do pictures but I convinced her (i.e. promised her iPad time). Only she wouldn’t put on the skirt I’d grabbed to go with the T-shirt and told me to just put it on top of the dress.  And then she refused to stand still so I got about 6 blurry pictures and these two. 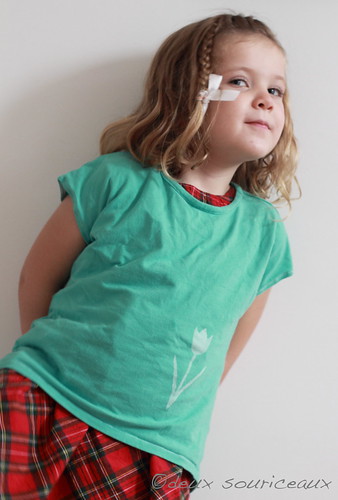 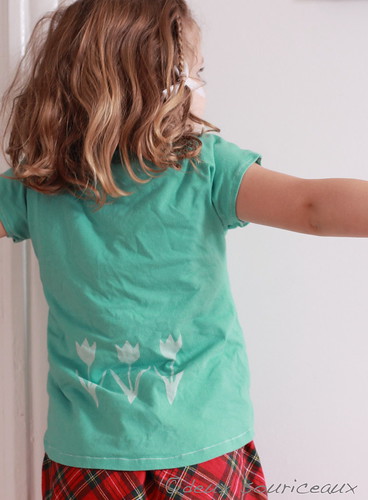 Whatever. The pattern is Jalie 3352 and the fabric is the Art Gallery knit that got the discharge treatment when I was alone for a weekend. Ha! I just realized something.  I’d originally planned to get a picture of this top when we were in Scotland.  On the day V wore it, she fell in the water before I could get a shot so her dad took her to buy something else to change into.  The dress she’s wearing underneath? Yep.  It’s the one he bought her.

Speaking of Scotland, I’m still not really back into the swing of things.  I forced myself to start a project I was planning on making before we left but only ever got to fabric cutting before putting it aside.  I’ve been a bit obsessed with finishing up some spinning instead.  I got the single done and wound it off onto a cone (it’s an empty cone of machine knitting yarn that I’ve been keeping around). 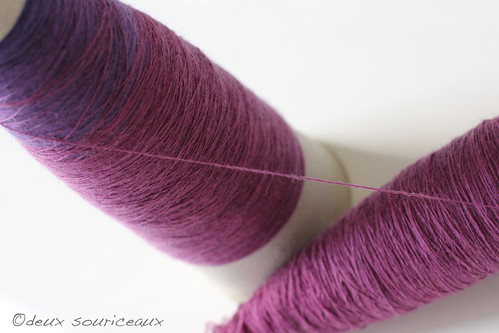 My left shoulder isn’t happy with me though so I’m going to have to sew for a few days before I get to chain plying this.

And since I had V at home with me yesterday and couldn’t get anything done (she was feeling a bit sick and was a whiny mess until I let her have the iPad), I finally took pictures of the fabric I bought on our trip.

My first purchases were at Harris Tweed. There’s a main store where most people go and just across the road, there’s the fabric warehouse.  Rolls and rolls of 100% wool, 100% handmade tweeds. 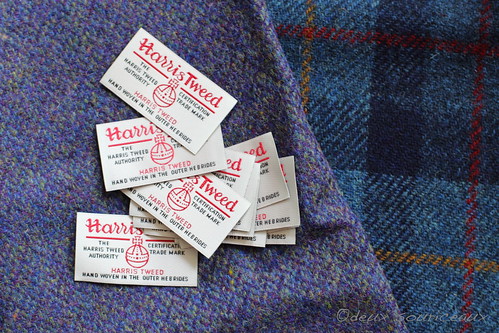 It’s very expensive so my original plan was to get only 1 meter to make a short skirt (the purplish one). Somehow, 2 meters of that blue plaid made it into the bag as well.  The tags are just a bonus that gets handed out with the purchase.  I said I wasn’t going to make a jacket so I didn’t get the big label that gets put into the lining and I regret that decision.  I didn’t think I was going to make one but now, I have a few I’m considering.

When we go to London, I insisted on going to Cloth House. 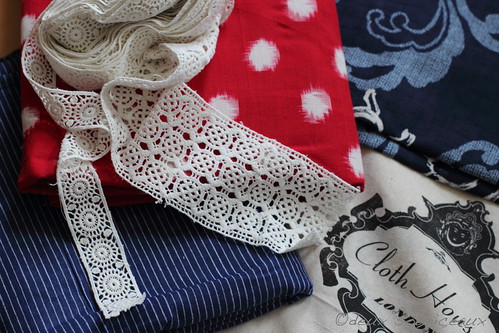 I forget how much of the trims I bought, just that it was quite a bit.  I’m thinking the thicker one would make a nice edging on a straight hem and the thinner one would be cool as an insertion.

I got 3 meters of the blue/white stripe and the red/white dot ikat.  (Side note: M was confused when I called it dots and I had to explain how ikat works.) The red one is likely to become a dress sooner rather than later and I haven’t decided what to do with the stripe. 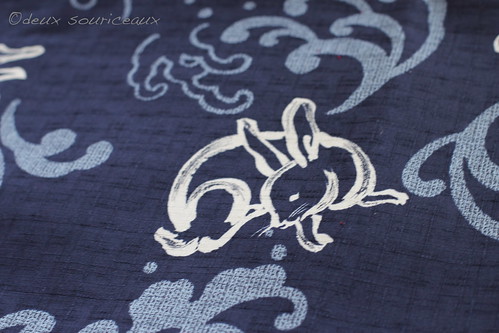 And finally, two meters of this Japanese bunny print. Totally going to be a full skirt for me.  M gave me some side eye about that.  He thinks it should become dresses for the girls.  I’m still saying a skirt for me.

We weren’t actually planning on going to Liberty of London. But then, we were in the neighborhood and I thought we should just check it out…  You know the rest, right?

The two tana lawns were in the sale bin.  The pink and purple one is a 1 meter cut (tank top maybe?) and the white and grey-black flowered one is a 3 meter cut (going to be another Granville). 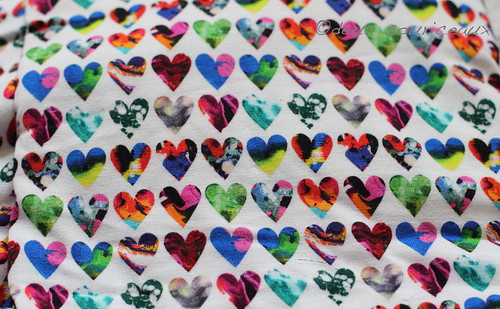 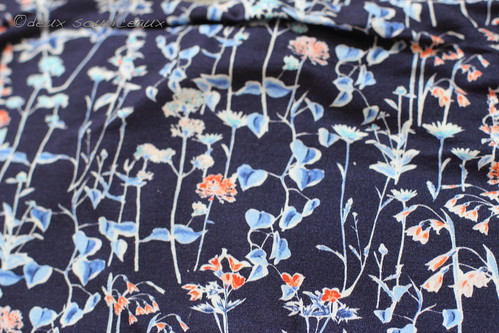 The jerseys were 40% off and each girl picked one.  Hearts for V and flowers for E.  I asked for 1 meter of each.  However, it was the end of the bolt of each so they just gave me the whole cut.  I haven’t measured but it’s a little over 1 meter.  I’ll be using these during the next Kids Clothes Week and crossing my fingers that a little bit is left over for me to use…

Now, hopefully, I can get sewing again?