Posted on September 1, 2016 by deuxsouriceaux — 4 Comments

I had these great big plans of all these things I would make while the girls were away.  My time never turns out quite like I expect.  This partially finished yarn was sitting on the shelf and taunting me.  So I finished it. 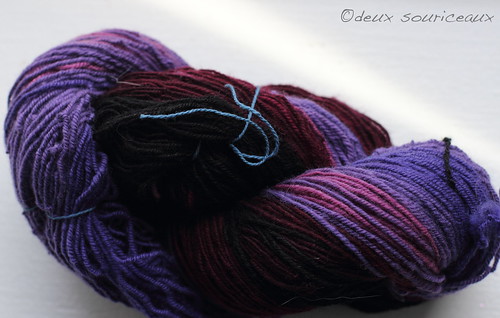 The fiber is from Loop.  I bought it in Rhinebeck, uh, last year? Two years ago? I’ve lost the tag I can’t remember the colorway’s name or the composition. It’s slippery and soft so, merino maybe? Or an alpaca blend? I was convinced it was an alpaca and merino blend but I can’t find anything like that in the etsy shop. Anyway, I loved how it went from black in the center, through deep reds and into purple.  I knew I would chain ply my single to preserve these color changes. 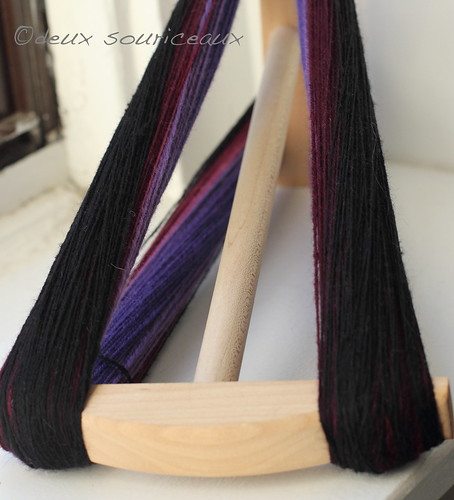 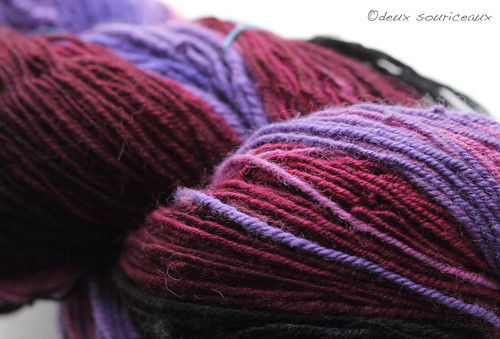 I was set on spinning the whole thing in a single cop.  It wasn’t huge but at the end, it got heavy and tended to break a lot.  I only got through because I’m stubborn! Anyway, I was afraid my single wouldn’t be very strong so I added a lot of spin when I plied. Then, when I washed the yarn and hung it to dry, I couldn’t weigh it down (it was hanging in the shower and I was worried extra weight might do damage) so some of it is still a bit curly. 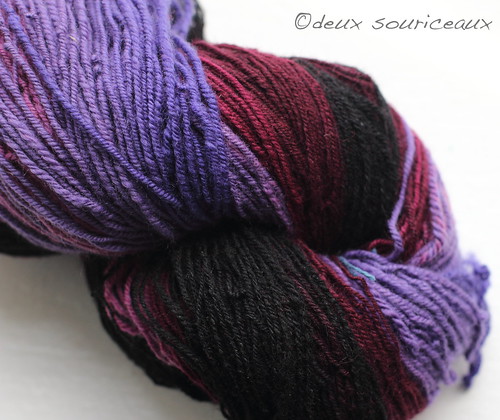 And now, despite not having even started my sweater yet, I’m on the hunt for a pattern.  I think I have about 275 yards.  Or rather, at least 275 yards.  I’m looking for a pattern that’ll use all of it.  A scarf or a cowl, maybe? I know I don’t want one of those small triangular shawls.  I already have at least three of those.  Since my spinning is still in the beginner stages (i.e. not exactly even), I do like something that plays well with a more, oh, let’s say rustic texture.

Like this? (That Nice Stitch Pattern By Susan Ashcroft)

But I’m also completely in love with this stitch pattern (Lapidarius by Holly Chayes).

Though I’m not sure it’ll work so well with an uneven yarn.

Song of the Sea by Louise Zass-Bangham is beautiful too but again, I’m not sure how it’ll work with my yarn…

And finally, maybe beads would make an interesting contrast? I also like the simplicity of it… (Intermezzo by Rahymah)

Anybody have any opinions? A pattern I may have overlooked?

(I hope I did the picture linking right. Each picture should link to the Ravelry pattern page. Photo credits go to the designer.)