I confess I wasn’t the most enthusiastic ever when the new season of PRP was announced. I wanted it to be a teeny bit later because I wanted to work on some items for me first.  And Pokemon? So not my thing.  I know it’s a big trend right now what with the app and all but I didn’t buy said app (no need for another time waster) and the girls aren’t really into Pokemon. 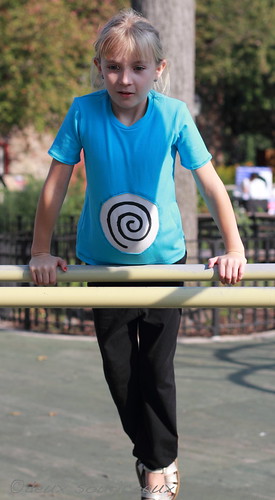 Thankfully, there are just about an infinity of Pokemons to choose from so I set out to find one that I could turn into an outfit for E.  An outfit that wouldn’t scream Pokemon. I found the cuteness that is the Poliwag.

Seriously! How cute is it? I had some blue jersey leftover from last year’s Unikitty costume for V and decided to use that.  It’s more turquoise than the Poliwag but it would do. 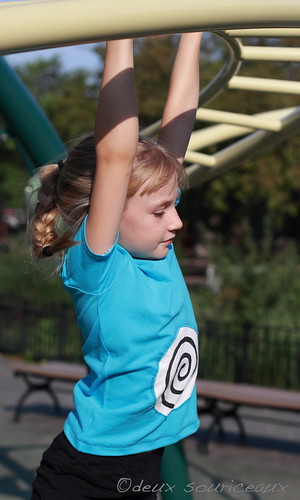 I made a good old Jalie 2805 and did a reverse appliqué white circle in the center. The spiral was painted on with a freezer paper stencil (if I’d had the time, I would have cleaned up those edges). I actually drew the circle and spiral in Illustrator and printed that out. It served both as the template to cut out the freezer paper and pattern piece to cut out the white jersey.  I did the edges in a black zigzag stitch, mainly because I didn’t have a coordinating blue thread to keep things invisible.  I repeated that feature on the hems (and of course, the picture shows just where the stitching went a bit wonky…) 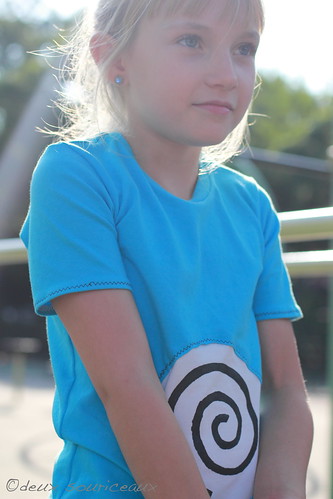 For the pants, I went with McCall’s 7113 in black jersey. E’s waist measurement would technically put her in something like a 4 but I went with a 6 (biggest size in my envelope).  Since there’s elastic at the waist, I figured I could just make it tighter there.  The pattern is pretty simple: 3 pattern pieces (back and front waist yoke are identical).  I read the instructions but the elastic channel was confusing so I just did it my way.  I didn’t even read the bottom elastic instructions and just serged it to the edge, folded to the inside, and stitched it in place. 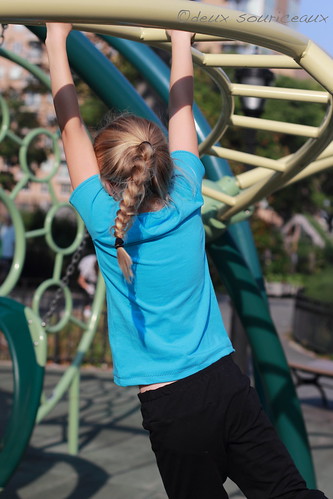 (I blew out the next picture to show the yoke.) 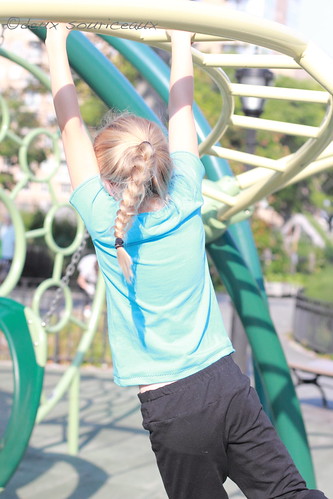 Simple and comfortable.  I like the way the slightly bubbled silhouette calls back to the Polliwag’s round shape.  And how it makes a change from E’s usual leggings.

I have to say though, leggings are still the best for playing.  I know some people find them too form fitting but that’s exactly what makes them perfect for active children.  The only thing that would provide better range of movement is nothing. 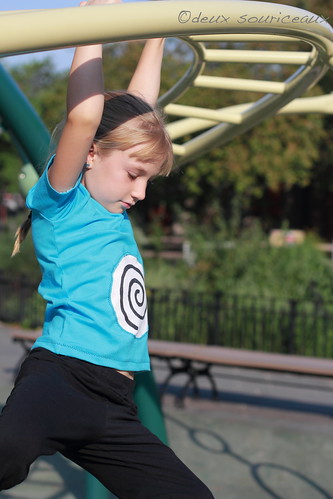 You can see the way the fabric shifts and pulls as E swings around on the bars.  It’s still comfortable because I used stretch jersey (the same I would use for leggings) but I get why she never wears woven pants. 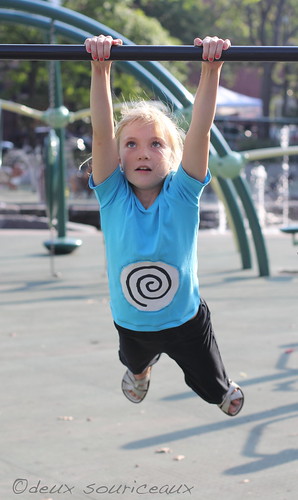 I need to get going on next week’s project now!  I have plans that might take some time…