Halloween costumes on PRP this week! I think this is the season of things I have a hard time with…  I alternate between making and buying costumes for the girls.  I don’t want to spend loads of time and money making something the girls will only wear a handful of times (if I’m lucky).  So if I can buy the costume, I do.  If I make it, I try to make something that can be turned into regular clothes afterwards.  Last year, Unikitty was a legging and a turtleneck that are now in V’s wardrobe plus a couple accessories that are now in the dress up chest.  E’s young Maleficent dress was turned into a Christmas dress that she can wear whenever she wants now.

This year, both girls want to be cats.  V wants to be a black cat and E wants to be Chloe from The Secret Life of Pets.  I’ll be making E’s costume in a few weeks because it requires more thought.  I suppose I could have just bought a costume for V but with PRP on, it never crossed my mind.  Besides, she could use some new leggings… 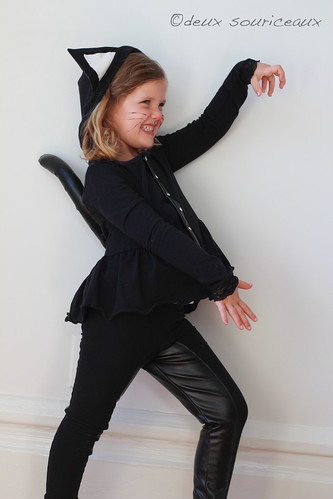 For the leggings, I went with the Dressage by Jennuine Design.  It’s my favorite leggings pattern!  I made a size 5 to give V some growing room (that’s why they’re scrunching a bit at the bottom).  I was going to just make the basic version but then I saw that stretch faux leather I’d bought for E’s steampunk look.  I still cut the basic pattern out of stretch cotton jersey but before assembling, I added the faux leather dressage pieces like an appliqué.  The stuff doesn’t fray at all so I just sewed along the stitching line and cut off the extra seam allowance afterwards.  The inside is all jersey so it’s a little more comfortable.  Instead of hemming the leggings, I added black stretch lace to the bottom.  Gotta love a fancy detail that lets me avoid hemming! 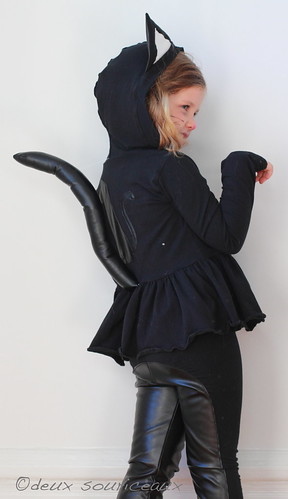 The “leather” didn’t have a whole lot of stretch so the leggings are quite tight around the calves.  Once on, I’m told they’re quite comfortable but getting them on and off is a bit of a struggle. No issue at the thighs and hips though because there’s a higher proportion of stretch jersey at those points.

For the top, I was originally going to make a T-shirt but the idea was boring me.  Instead, I went with a hoodie.  I started with Jalie 2805.  Again.  I used size I because the dress I made from it for V is quite large.  Long sleeves (hemmed with lace again), crew neckline.  I cut it a little shorter and added a peplum (lettuce hem).  It was supposed to be big enough to wear over a top but the sleeves ended up on the tighter side. She could still do it, I guess.  She is wearing a tank top underneath in the pics after all… 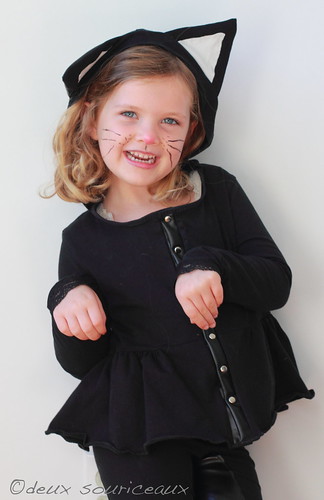 I was going to put in a zipper at first.  In fact, I spent a whole day trying to get it just right with no success.  At then end of the day, V told me she didn’t want a zipper anyway.  So I made button plackets out of the faux leather and put in snaps. 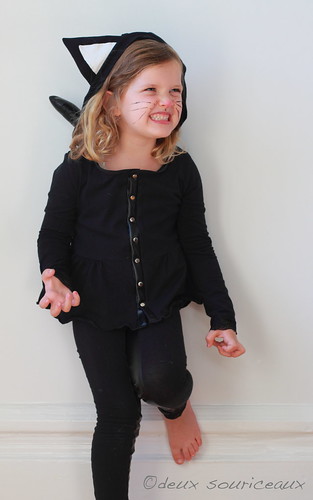 I stole the hood from some other pattern and adjusted it to be a bit smaller.  No time for extensive muslining so I kind of winged it.  It’s not perfect by any means but it works.  The ears are sewn into one of the hood seams.  I was too lazy to interface them so they’re a bit floppy.  I may try to do a bit of handstitching to get them stand up properly before Halloween. 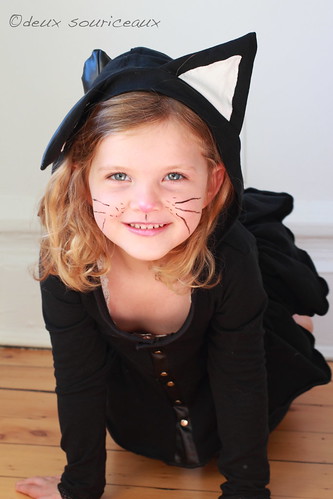 The neckline is finished with black fold over elastic. You can see in the pictures that I totally forgot to stretch it as I applied it.  I’ve since fixed it but didn’t have the time to update the pictures.

The tail is just a stuffed closed tube of the faux leather with a piece of wire inside.  I shaped it, pinned it to the hoodie, and used some thread to attach it to the neckline.  After Halloween, I’ll remove the tail and she can wear her hoodie when she wants. 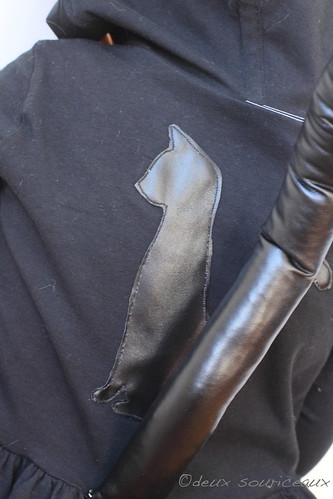 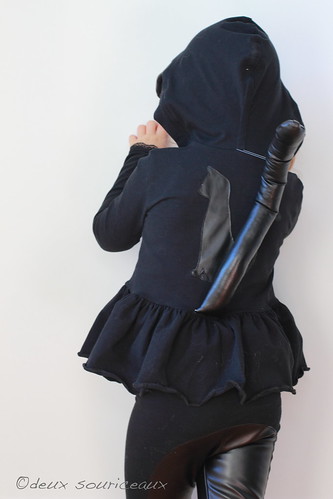 And then, everyone will see the cute cat appliqué on her back!

Okay.  Now, I need to figure out Chloe.