Posted on November 3, 2016 by deuxsouriceaux — 2 Comments

I took the girls to see The Secret Life of Pets last Summer.  E fell in love with Chloe and wanted to be her for Halloween.  She’s a grey cat with a bit of white and she’s massively fat. 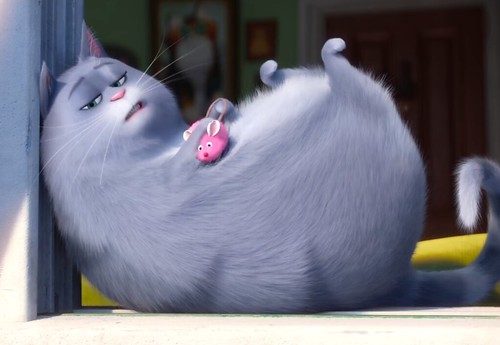 As always, I wanted to make this wearable after Halloween.  I hate spending gobs of time and money on something that can’t be worn again.  We don’t have the space for a massive dress up chest.

For fabric, I ordered some light heathered grey sweatshirting.  It’s soft and cozy and biased like a fiend when I washed it.  I managed to tug it back into shape, more or less but I won’t be surprised if everything starts twisting again at some point. I had some white faux fur already to use for accents. 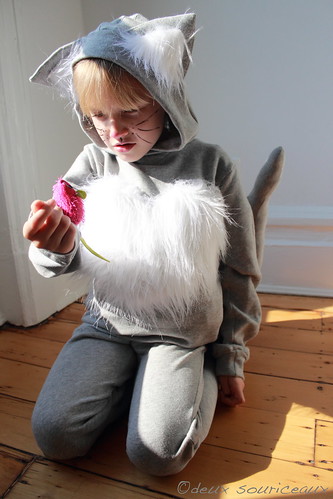 The pants are McCall’s 7113 again (I used them for the Pokemon challenge too).  I lengthened them a smidge.  An inch? I’m still having a hard time wrapping my head around what the waistband is supposed to look like and how I’m supposed to sew it.  The instructions are just plain odd.  This time, I used really wide elastic in order to skip making a casing.  In the end, it’s a tiny bit loose in the waist (but not enough that it’ll fall down) and not any nicer looking.  Eh, it’s cozy and E enjoys wearing them.

The hoodie is Jalie 3355, bought specifically for this purpose. I thought of adjusting a T-shirt pattern and adding a hoodie but this was less work.  I went two sizes up to make it extra roomy.  I modified the hood to add ears and added a furry heart to the front.  No, Chloe’s white belly isn’t heart shaped but I figured a heart would be less costumey after Halloween. 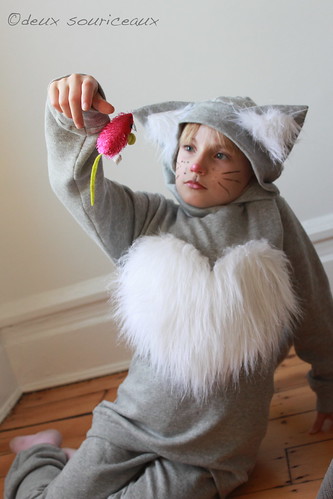 To make E fatter, I pinned a couple plastic bags to a T-shirt and filled them with fiberfill.  She wore that T-shirt under the sweatshirt.

The tail is a strip of sweatshirting that I sewed into a tube and filled with fiberfill and wire. I pinned it to the sweatshirt and used thread to keep it standing up. 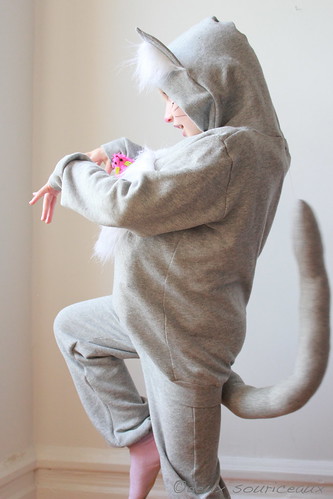 The pink mouse was temporarily sewn onto the sleeve. (There’s a scene in the movie where Chloe can’t get rid of her toy mouse.) 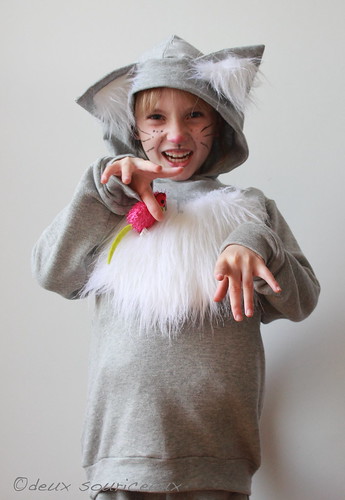 And voilà! Halloween is done!  And E has been sleeping in her costume… 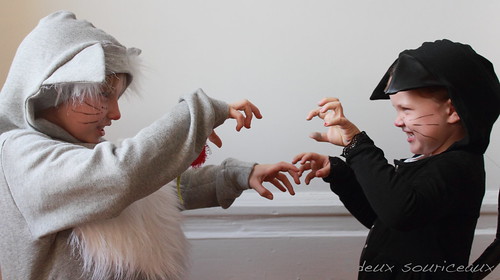 2 comments on “Chloe Cat for Halloween”