Posted on December 8, 2016 by deuxsouriceaux — 3 Comments

This is some of the wool I bought in Scotland, the real handwoven Harris Tweed stuff.  And that reminds me that I forgot to sew one of the tags they gave me into the skirt.  Must do that.

I’d always planned on a skirt for this.  Short and straight.  I used McCall’s 3830 for it. It’s a very simple straight skirt in 5 lengths with darts and a facing but no waistband. And optional belt loops. The longer lengths have a back vent.I read some reviews saying it ran big so I went with a smaller size (my measurements put me between two sizes and I chose the smaller one). I picked the shortest length.

If you check out the pattern, you’ll see it closes with a zip whereas mine doesn’t.  I just cut the back out on the fold, eliminating the seam allowance.  Then, I tried to cut out two fronts, figuring I’d choose where to stop the front wrap afterwards.  Only after cutting one front out, I realized I hadn’t been very smart and there was no way to cut full second front out. So I just cut it as far as I could, i.e. I made sure to get one full half and as much of the second half as possible.  And I cut it on the cross grain. You can sort of tell but it isn’t super obvious.  My fabric took got me a little past the dart which was where I’d been thinking of stopping the wrap anyway.  For the facings, I cut the back one on the fold, like the skirt and I cut out two full front ones knowing one of them would need to be trimmed. 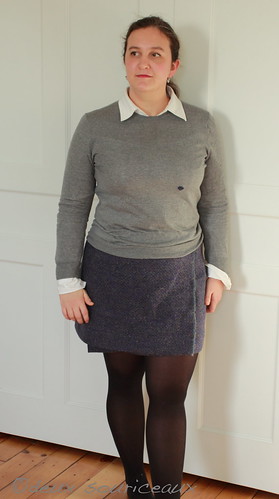 Assembling the thing was simple.  Sew darts, sew side seams, add facings.  I made a button hole on each side of the wrap. I wanted a fringe on the edge on the wrap but I was afraid of it coming further and further undone. The facing’s edge also needed to be resolved.  I just cut the facing a little bit past the edge of the skirt, about 1/2″ and folded to the inside (sandwiched between the skirt and facing).  I edgstitched that bit (on the side of the wrap edge, turned at the top of the skirt and stitched a line about 1/2″ in all the way down.  You can see it in the picture but it isn’t obvious at all in daylight.Then I pinned the skirt on myself to decide how long to make it (I think I gave it a 2.5″ hem, machine sewn with an invisible stitch) and to decide where the buttons would go.  Sew on buttons, give it a last steam and press, and done! 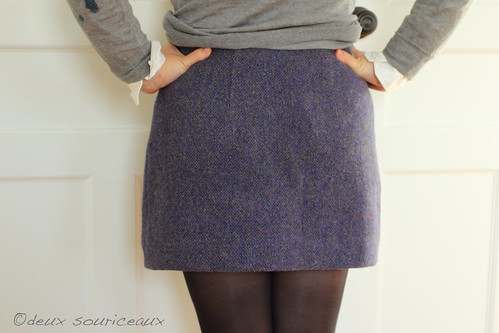 I love that I can just move the buttons if my weight fluctuates. In fact, I think I need to move the inside button over a little.  The underside of the skirt seems to be sagging a little which would indicate that it needs to be a bit more snug. 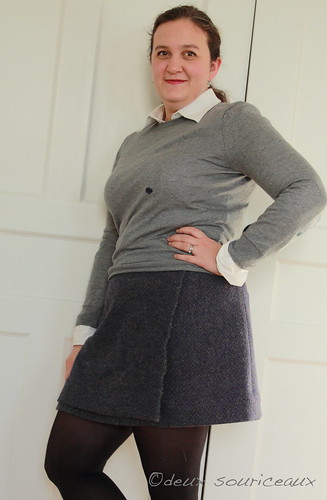 It’s hard to see because E took the picture and it’s blurry but I used a silver button with a vintage look.  If I’d had the time to go shopping, I would have looked for a celtic style button.  And I would have fully lined the skirt in Bemberg rayon instead of doing a cotton facing. 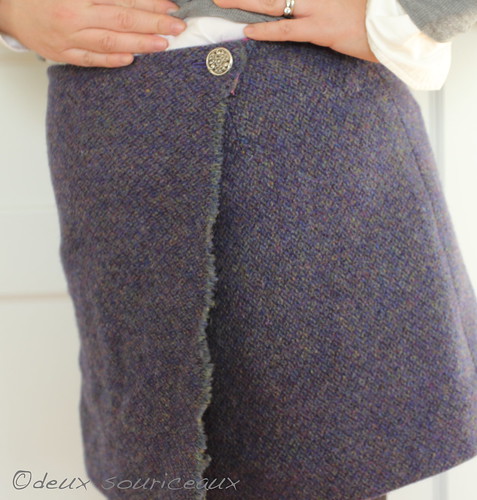 The cotton is a little wrinkly from a day of wear but I love the color I chose.  Oh! You can see that line of stitching I put in on the side. 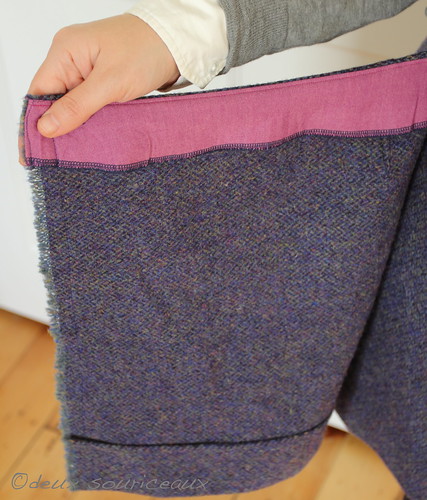 The wool is great.  Woven tightly enough that it doesn’t unravel easily.  And the yarn has that wool stickiness, you know? It’s a two color weave and I see some diagonals so it must be a twill of some sort.  The warp is variegated greyed green and blue and the weft is a deep purple.

It’s a little itchy to be sure.  Not a skirt I would wear without tights.  I can still feel the itch through my tights in fact!  But it’s not too much.  You get used to it.  E has a wool kilt we got her in Scotland and she says the same thing.  Itchy at first but you get used to it.  It isn’t like a scratchy tag that never ever stops bothering you.

I didn’t think I’d have so much to say about such a simple little skirt! Picture credits go to E and M.  E was happy to take my picture but does not rock at sharpness.  M does not much better with sharpness but was not in the mood for picture taking… 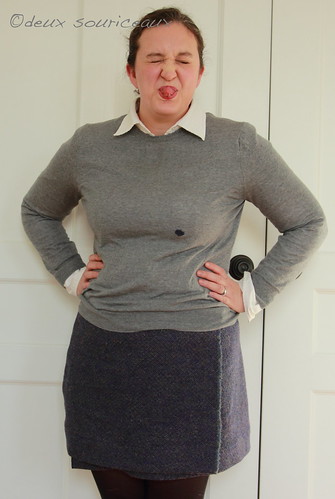 (This one made E laugh so I had to include it.)