Project Run & Play – It’s All About That Place

The making has been slow going and I’ve been skipping a lot of sew alongs like Kids Clothes Week. But I will still work to fit Project Run & Play in. The new season is starting and this week’s theme is about creating an outfit for a your dream destination. My problem? I don’t have one. I want to go everywhere! So I set about it differently. I wanted to transform an old sweater of mine for E. It had a stain I just couldn’t remove and she’s been growing out of all her warm sweaters. And I’d promised her leg warmers. Add in some shorts and you’ve got the perfect outfit for a trek in the mountains in Summer. It can get cold in the mornings and evenings up there but the Sun and exercise will heat you up midday. When I was done and dressed E up for pictures, I had an idea of the country she looked ready for. I asked M what he thought. He said Switzerland. I said Austria. So trekking through the Alps it is! 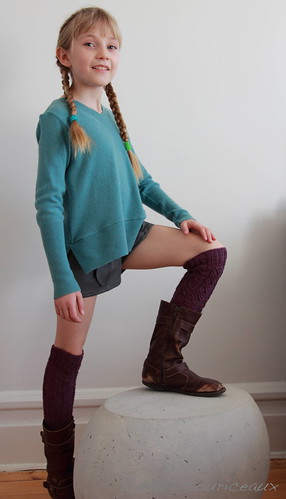 (Pretending to climb a mountain, okay? I originally wanted to take her to Prospect Park for some more trek-like pictures but it was too cold for bare legs.)

The shorts are the Clemence pattern from Filles à maman. E is a size 6 but she wanted some growing room so we went with a 7. 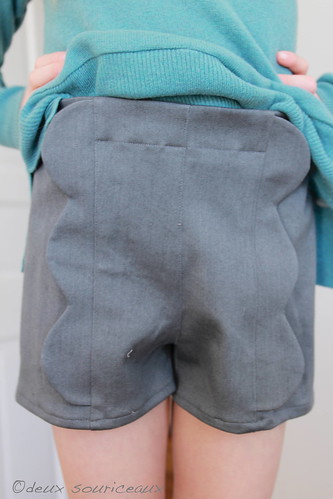 I used buttonhole elastic and hid the buttons under the facing. They’re kind of hard to access but it works. I just wish that elastic was a little wider and thicker. It feels a little flimsy in there. You can see I forgot to do a final press before pictures and that I skipped top stitching the scallops. I topstitched all the seams I could to get the seam allowances nice and flat so they wouldn’t bother E (she’s very princess and the pea about scratchiness). I managed to get all of them. The fabric is stretch denim from Mood that I used for jeans for myself. Still have quite a bit of it…

The leg warmers are hand knit. I used Tactile Fiber Arts Studio Sierra Sock in Concord Grape. I designed them myself from a stitch pattern I found in the first Vogue Knitting Stitchionary. I wanted the pair to be symmetrical but the stitch pattern was only written for one diagonal. I just reversed it. I took really good notes so I’ll be able to share the pattern.  Hopefully this week. I just need to see if I can wrangle a couple charts while I sew up the next challenge. 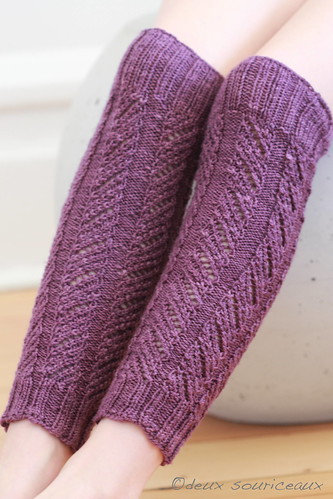 Finally, the whole point of this outfit: the sweater. The original was a JCrew cashmere V-neck that I loved and wore over and over again. The seams were coming undone at the lower sides and cuffs but I didn’t mind. What I did mind was the stain that I couldn’t get out. The color is perfect for E. The cashmere is soft for my little miss sensitive. I wanted to keep the finished V so I measured where to cut on E. I used a Jalie pattern to get a good shoulder slope. I couldn’t get the back neckline ribbing though so I finished it with bias tape that I extended right over the shoulder seams to reinforce them. 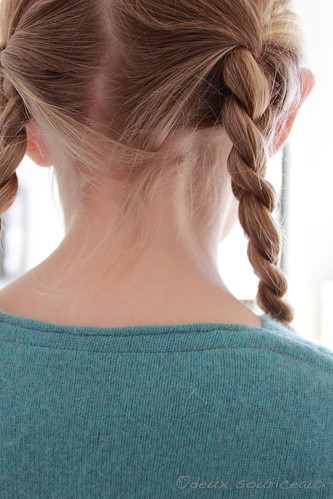 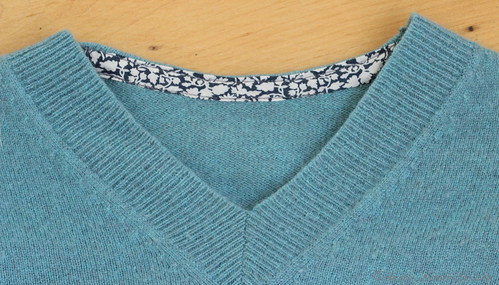 The bias tape is made from M’s old cotton Liberty print shirt (it’s from a Liberty-Target collab so it isn’t the same as real Liberty fabric).

I drafted the armscye on paper before cutting it out (measuring on E where it had to start and end). For the sleeves, I measured the maximum width I wanted from one of her cardigans and drafted a sleeve cap with the help of the Metric Pattern Cutting for Children’s Wear and Babywear book (that title is quite a mouthful). I eyeballed the length of the length on E and cut the new sleeves from the old ones, keeping the ribbing at the bottom. 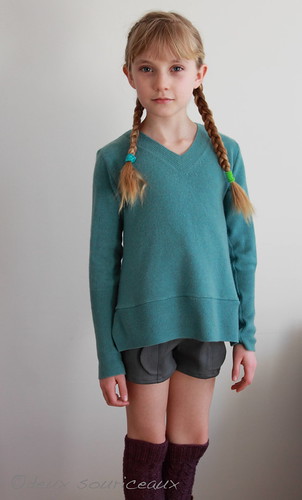 I originally wanted to keep the bottom portion of the sweater intact to avoid hemming but it was just too long. So I cut off the ribbing carefully before sewing the side seams. That actually helped because the ribbing was pulling in the jersey part. Removing it let the jersey relax. I gave the sweater a slight A-line shape. When I tried the sweater on E to determine where to cut it off, I saw it was just the tunic length we were looking for. I removed what was needed to get the sweater to that same length once the ribbing as sewn back on. 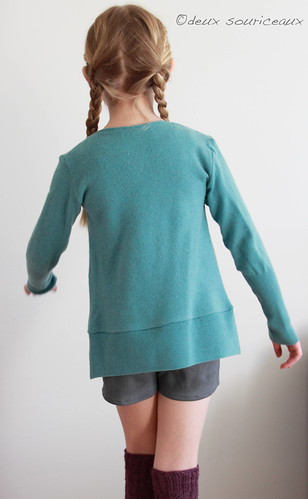 The ribbing pieces from the original sweater were actually finished at the sides. As in, they were knit to the specific size needed. And since ribbing pulls in, it was still a smidge narrower than the new sweater. I decided to leave it unsewn at the sides, like vents, just overlapped a little. 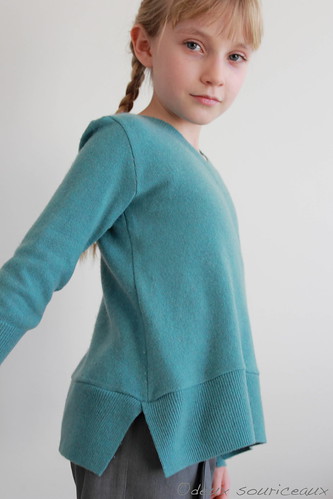 Of course, E told me it was itchy. Cashmere. Itchy. Total princess and the pea. To be fair, she was wearing a tank top. She put it on again later over a 3/4 length sleeve top and said it was okay. Itchy at first but cozy and soft afterwards. We’ll see how it goes… 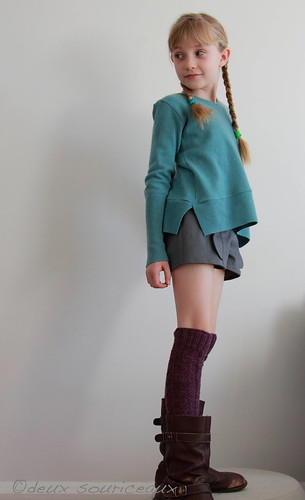