As the girls have gotten older, I’ve had to let go of my own design ideas and allow them to give me their input. It doesn’t always work (see skinny pull on jeans made in E’s choice of fabric and made to fit exactly how she wants that she never wears). And sometimes, they actually like my ideas. But this week, I was sewing for V and when V has an opinion, she will be heard. And if I do as I please despite her opinion, I’m setting myself up to have all my hard work rejected. Loudly. 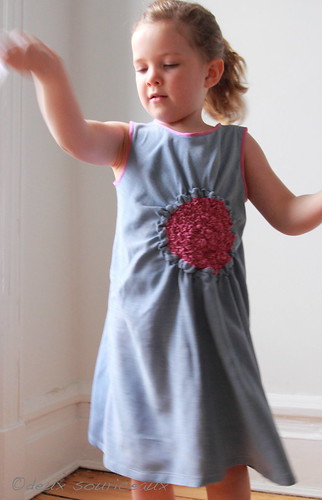 I had my mind set on using one of the ideas from Pattern Magic. Like the dress I made for V last year. (Side note: she was so adorable with that short hair! I wish she’d let me cut it like that again.) This time, I picked a really cool spiral design from Pattern Magic 3. In the sample, it’s on the front of a dress but I wanted to put it on the side of a long skirt. I showed her the design and explained what I wanted to do and she nixed it. She told me I could use this gathering method using zigzags on a skirt for her but that what she truly wanted was the dress with the off center shirred circle. It’s actually a flowy tank in the book but she saw a dress and requested a dress. 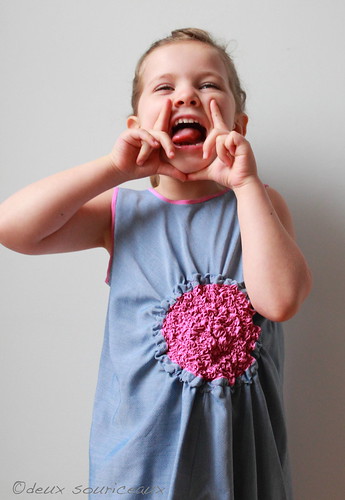 I went with the Building Block Dress as a base again. I first transformed it into an A-line shift dress, keeping the button band in the back. Then, I went through the whole process of modifying the pattern according to the instructions in the book. It took me forever! First, I had to make a sample of my shirring to find the rate of shrinking. 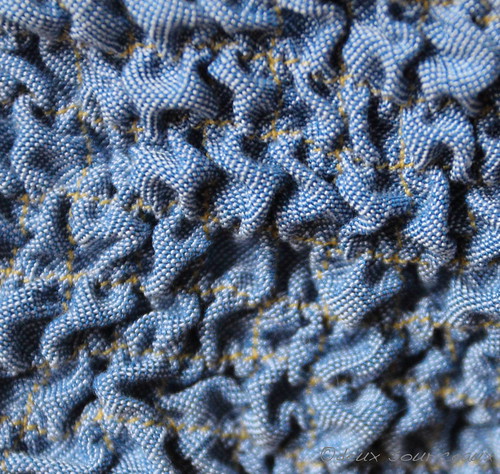 See, it’s not as simple as just shirring a circle on the dress. When you do that, all the edges ruffle up. So you have to make that shirred section bigger so that the fabric lays flat once it’s shirred. Then, you use that ratio to determine how big your circle has to be in order to shrink down to the right size.  Cut that circle out. Then, you have to do the same with the circle edge on the main pattern piece and slash and spread until that opening matches the circumference of the circle. The seam lines are kept closed but the hemline is opened up to have soft fold falling down from the circles. I know. This is clear as mud. The book explains it really well though. 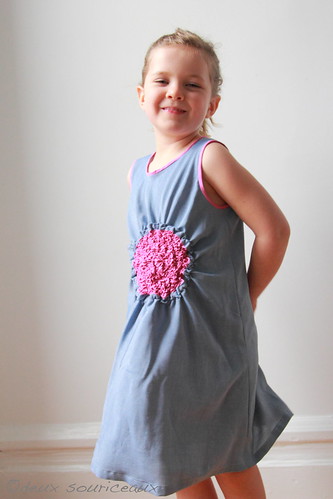 Obviously, there are still going to be some folds from the slashing and spreading. But when you get to the shoulder seams and side seams, you can see that everything is nice and flat. 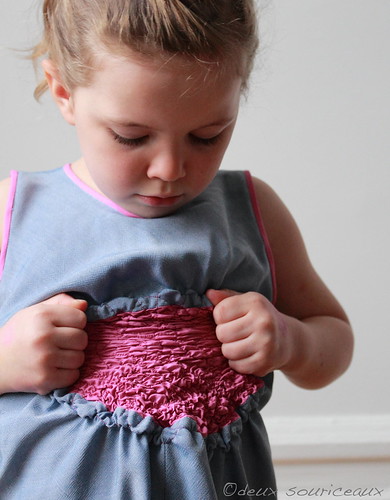 Originally, I was going to make the circle in the same fabric as the dress (a soft tencel chambray) but went with this orchid lawn at the last minute.  Thought it would make it look like a flower. And then, I was thinking of embroidering a stem and leaves over the seam but the seam was hiding in the folds so I didn’t think it would look good. 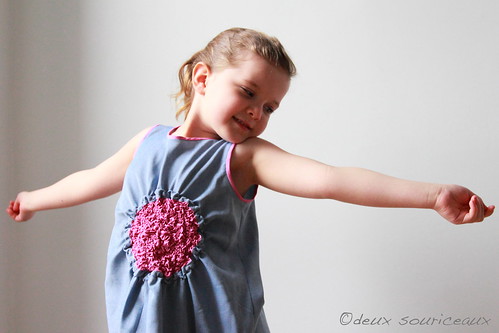 The dress was supposed to have cap sleeves but V decided on sleeveless and wouldn’t change her mind. She’d already had a fit when she thought the circle was centered  (it’s 1.5″ off center) so I was not risking her wrath again. Bias bound armholes and neckline then. (Same lawn as the circle.)

V chose the buttons for the back. It’s hard to see in the picture but I went with white thread for the colored buttons and magenta for the white button (I used the same thread for the shirring but white for construction). 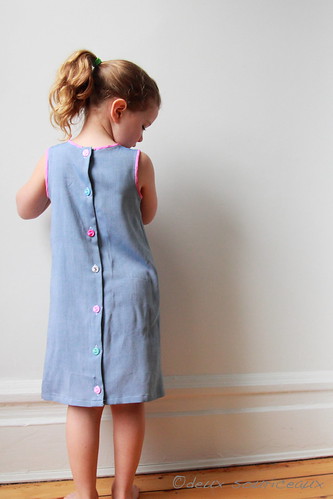 For some reason, I got it in my head to make a purse with my sample square. It was super quick. The lining has the bottom made of white cotton-lycra jersey to maintain the stretch of the bottom. The button loop is oval elastic and the strap is just grosgrain. V is super excited about it. It’s a good thing I enjoy putting effort into my sewing because the reception my thrown together projects get compared to the others would totally depress me. 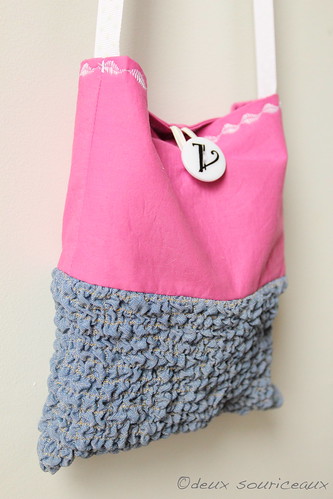 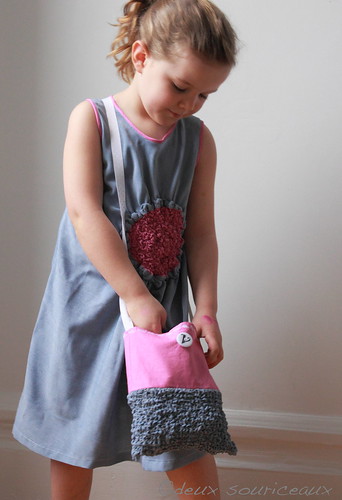 And now, I have nothing that I have to make! I’m going to enjoy choosing the next project…