Yesterday, the girls had their first races. One mile down 5th Avenue. I had my camera out like a good mom and I tried very hard to get good pictures. It isn’t easy! I needed fast shutter speeds but enough depth of field to keep them in focus as they were running toward me.

V went first. We’d prepped her for a 1 mile run and were a little worried she’d have a hard time with it. Turns out the 5-6 year olds were doing roughly a 100 meter dash. Easy and fun according to V. 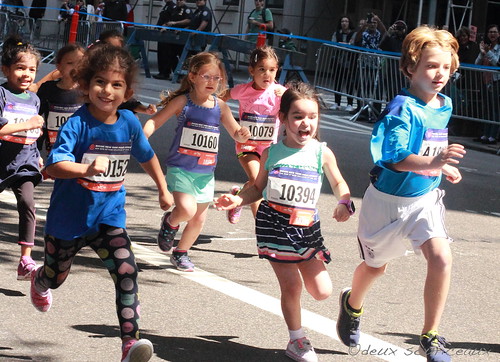 (Hard to get a good picture because the mini runners were in a pack the whole way.)

E did the full mile though. She didn’t train very hard but, according to her grandfather, she manages to have a just right pace that allows her to keep going. V and I went to the half mile marker to see her. It’s at the top of the slight uphill section of the course. I figured it was one of the spots where she might need encouragement. 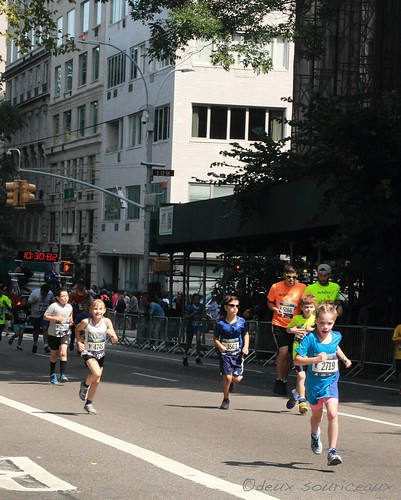 Is that the face of a kid who needs to be cheered on? 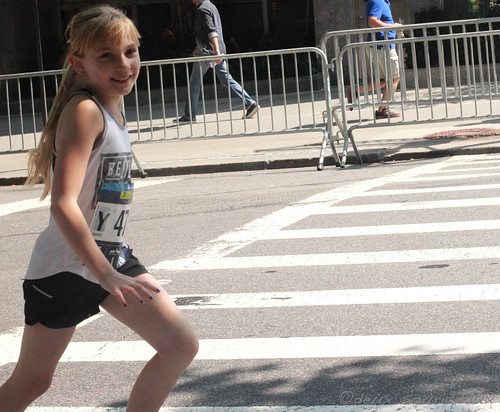 She was happy to see us, especially her silly little sister, but she didn’t want her father making any noise. (He ran the course along with her but didn’t go on the course. Quite a few parents did that.)

She ran faster than she ever has. Her cheeks were flushed pink at the end and she needed to sit for a bit before going off into Central Park and climbing all the boulders…

PS: I was very lucky to be able to post this. We’re back at our apartment but there’s still work going on. No kitchen yet! We spent a week without being able to set up the computer. It’s up now but the internet is slow (we’re set up far from the router). Some websites are having a hard time with it.