The theme for third week of Project Run & Play is your favorite Halloween candy. I don’t enjoy the stuff as much as I used to. What can I say, I’ve become a chocolate snob. But when I was a kid, my very favorite was Reese’s peanut butter cups. Only that wasn’t going to work. Neither of my girls wears much of those colors. So I went to another of my favorites. Smarties! For US readers, I’m not talking about those chalky pastel things. I’m talking about this colorful deliciousness here. 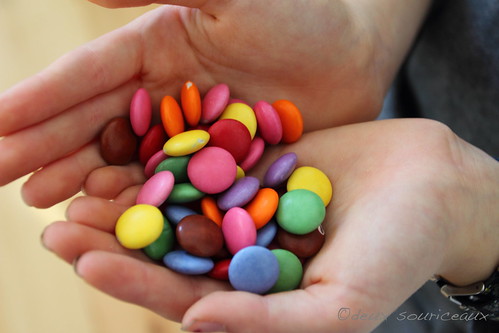 When I was little, they didn’t make blue ones, my favorite color. Instead, there were two shades of brown. When they finally started making blue ones, I was so excited. I’d look for the boxes that advertised the presence of blue Smarties and always ate them last. And I was annoyed with the tv commercial that asked if you ate the red ones last because of course not. 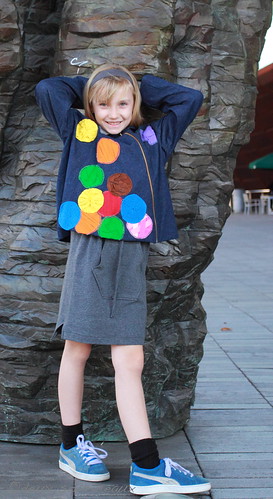 First, the jacket. Ideally, I would have liked to have a bunch of small dots, like a pile of Smarties. They would all be embroidered. Time constraints made me go with bigger circles. I made two of each color: red, orange, yellow, green, blue, purple, pink, and brown. I used a different technique for each color. 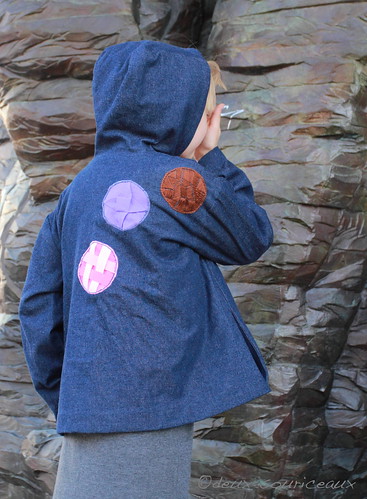 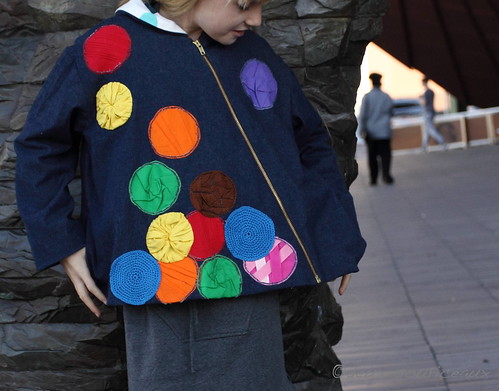 I drafted the jacket using the blocks in the book Pattern Making for Kids’ Clothes. I always have a hard time with proper wearing ease for outerwear and this block helped a lot. I drafted a hood and put the zipper on a diagonal. There’s a zipper guard on the inside to avoid it catching on clothes. The lining is organic interlock cotton. 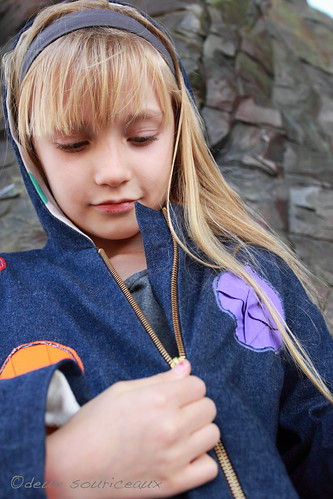 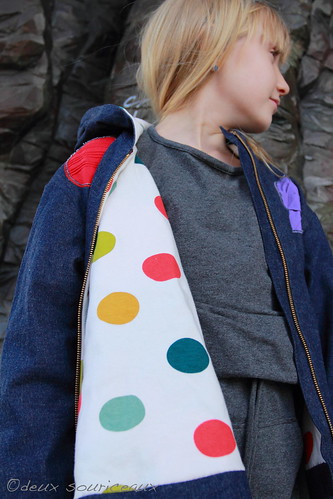 E required stretchy material for her jacket so I used stretch denim. The dark blue recalls the dark blue-purple background on the Smarties boxes. 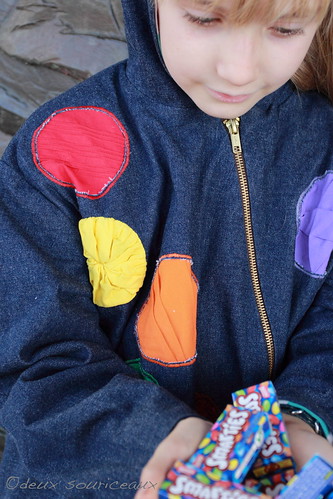 I love the fit on this jacket. It has the exact swingy shape I wanted. The hood fits right for once and it has pockets. There are a bunch of little invisible construction details I’m proud of as well, like the zipper guard. And when I drafted the front, I made sure to cut the hem allowance so that it would fold up neatly. And the outer sleeve was cut a little longer than the lining so that it would fold to the inside. However, I think I would have liked it better with smaller dots, all embroidered, like my original plan. The girls enjoy looking at the variety of techniques though so I guess it works out… 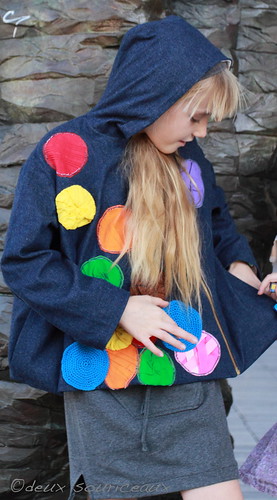 For the dress, I started with the Jalie Dolman Tops. I sized up to make it a little slouchier and cut the hem straight across. The waistband and skirt are just rectangles. I lengthened the sleeves to make room for hexagon cutouts and I added a hexagon kangaroo pocket to the skirt. 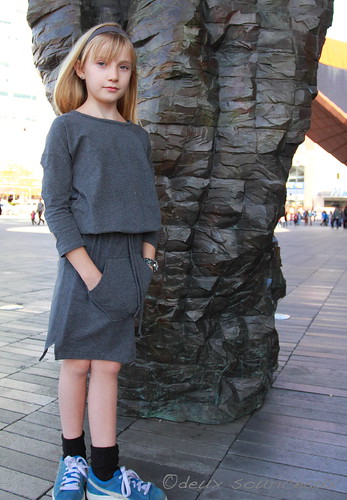 The skirt has side splits and is 1″ longer in the back. E doesn’t wear dresses much at all. She finds them impractical for swinging around on playground equipment. I designed this dress with that in mind. It’s meant to be worn as a dress or a tunic with leggings. The elastic at the waist means that it won’t flip up over her head when she swings upside down. 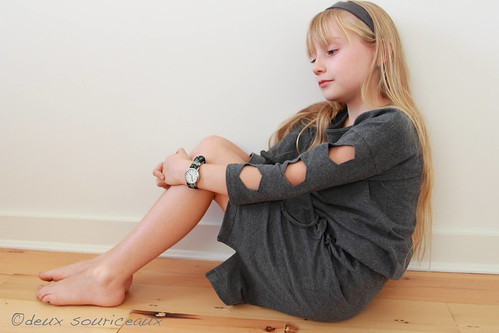 It’s a little bigger than I wanted right now. I meant for it to be shorter! I also wanted it to be something she could wear for a long time. The slouchiness will diminish as she grows bigger and the extra length both in the bodice and skirt mean that she’ll probably be able to wear it into her teenage years. The fabric is a grey heather stretch jersey. I’m just hoping I made the style grown up enough for an older girl! 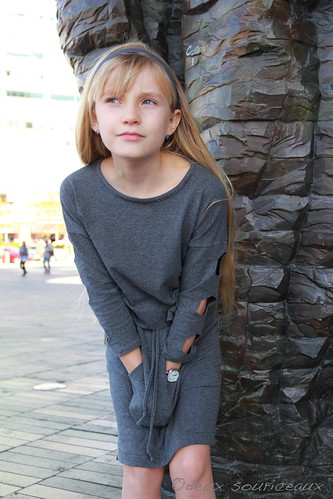 Confession time: I had a hard time completing this project. The jacket was almost done when I found out I was eliminated and I finished it that day. The fabric for the dress was cut out so I felt I had to finish it. It should have been fast, no more than a day or two. It took me all week. The reality of being eliminated settled in and sewing along became increasingly hard. I’ve since scrapped my signature style plans. I just don’t have it in me to keep going right now. But I do have the fabric and notions and will use them. The girls need new Christmas dresses anyway. I’ve planned to make one this week and one next week but I might switch to sewing for myself. I have no clue…

Oh, and we took pictures at Barclay’s Center. My original plan for all 4 weeks of PRP was to take pictures at different Brooklyn landmarks. The first two weeks were Brooklyn Museum and Prospect Park. I was going to take pictures in Brooklyn Heights this week, on the promenade that overlooks the East River. And signature style would might have been Coney Island. But those places are a little further from home and I didn’t have the energy to go all the way there. I ended up at Barclay’s and it turns out it’s actually another Brooklyn landmark…