This is that third project from the 2017 Ysolda club. I finally got around to taking pictures on Wednesday. I hate doing pictures on my own because I have to run back and forth to the camera. My remote control’s cord is too short and the cordless one doesn’t work (it was cheap so no great loss of money but annoying nonetheless). So I always hope to get M to take the pictures on the weekend. More often than not, we don’t get around to it. And if we do, I always feel a little awkward because I know it isn’t his favorite use of his time. 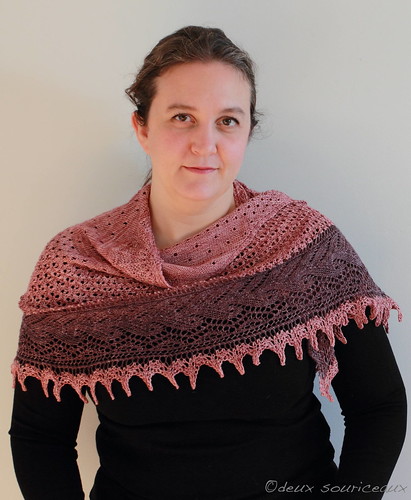 The yarn is Eden Cottage Yarns Titus 4ply, a lovely blend of 75% merino and 25% silk. It’s smooth and soft and shiny and strong. It did hurt my hands a bit but not the way linen does. There was one small hank of a warm purple shade and a bigger hank of a warm pink, both with variations in the dye strength (kettle dye type thing where the color doesn’t end up uniform because you don’t move the yarn around in the dye bath). They felt like Spring colors that had been given an autumnal makeover. Very pretty. 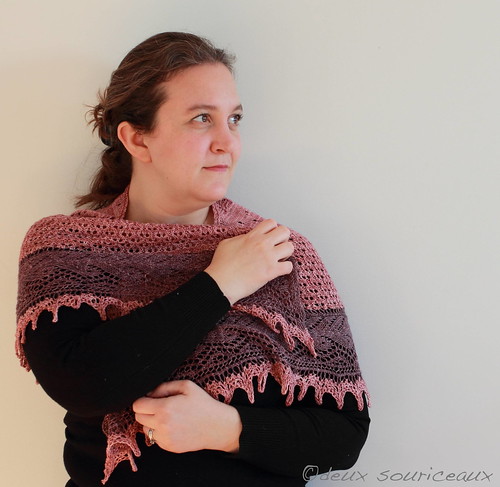 The pattern makes me feel repetitive (no pictures in link at the time of this posting). How many different ways can I say that Ysolda’s patterns are clever and elegant? It’s obvious that everything has been thought through, from cast on to cast off. Here, you start with the purple lace band. It’s made so that it’s more airy on one side which will help it block into a curve in the end. Yarn overs are worked at either side. You end up with loops that are super easy to pick up for the pink parts. 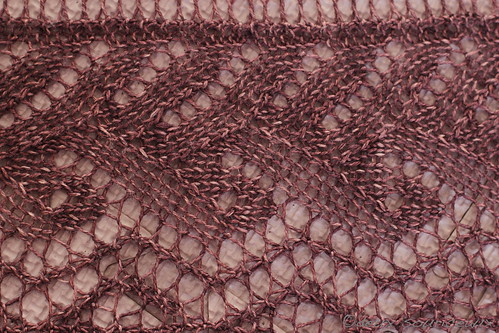 The body of the shawl (the big pink part) starts off with lots of lace and gradually goes down to none. I love that effect. 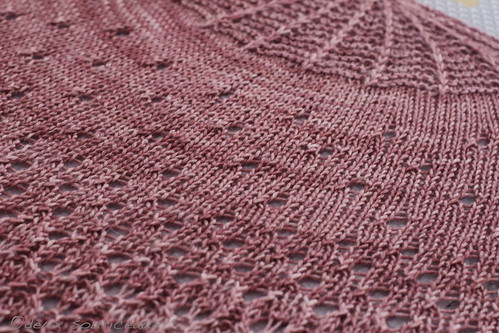 And then a border with points that I couldn’t block perfectly because I don’t have enough blocking mats. And no spare bed. Hence some wonky points. 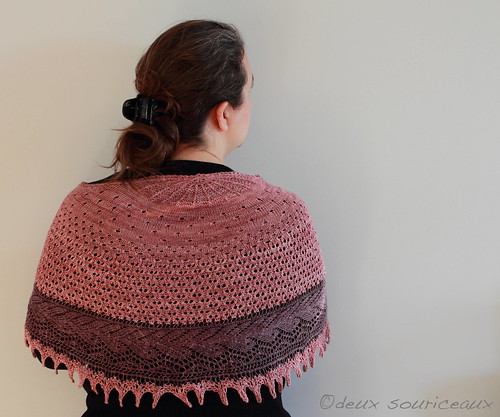 I’m sorry, I don’t really know how to model shawls. It’s like, here I am with my arms spread out to show it off! Here I am wearing it like I never will wear it in an attempt to show the lace! Bonus weird face! (It’ll end up mostly being worn as a scarf and sometimes inside when I’m cold.) 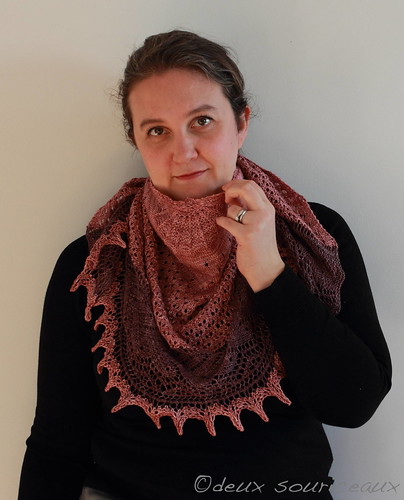 That combined with trying to take them on my own doesn’t give the best pictures. I’ll get it someday. Maybe. I’m in the 2018 Ysolda club so I’ll have the opportunity to practice…