And also a knitting update because there isn’t much to say about the leggings but I’m excited about the knitting. But first, the leggings…

Right before Kids Clothes Week, V came to me telling me that I needed to get her lace up black shoes and make her blue pants and a striped T-shirt for that Friday. She was supposed to dress up as a character from a book she’d read. A person, not an animal. She’d picked Henry from the Henry and Mudge books. (I think this was a celebration of the end of a character study unit. I remember V had to write something about a character in a book she’d read and use information in the book to justify her answer. So, for example, Henry is kind because he takes care of the kittens.)

I told V that I would not be buying her lace up black shoes and that her sneakers would work just fine. And she said she could wear any T-shirt. So the blue pants were the only thing left. I told her I would not be making her something she’d only wear once. She countered with the roaring 20s dress I made her sister that was only worn once. Point to V. I still wasn’t in the mood to make something she’d only wear once so I decided to make her blue leggings. She could always use new ones anyway. I’ve made the Wild and Free Lounge Pants before I thought they would be perfect with a dog face representing Mudge. No, technically, Henry doesn’t wear a picture of Mudge on his knees but I thought it would be cute. So, dog face. 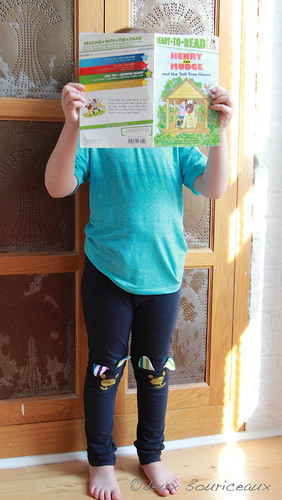 With rainbow ears because I had remnants and rainbows are awesome. 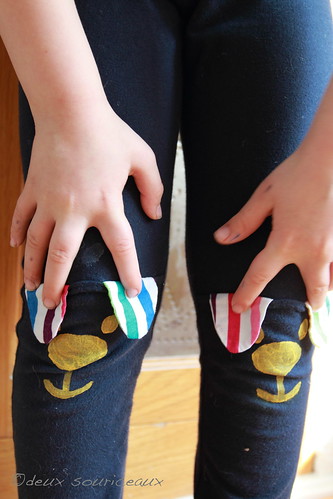 (It took me a long time to get these pictures because V wore them, got them dirty, and then forgot about them. When she wore them again, she got them dirty again. Yogurt. I took the pictures anyway.)

Now the knitting. I’ve been in a weird spot with it. There’s this cardigan that I started almost two years ago. I wanted that cardigan so badly but once I’d finished that lace on the back, I got bored. So many provisional cast ons and endless stockinette. I put it aside. During the Winter, I decided I was going to finish this thing. I knit about 50 rows, not feeling any joy. I moved on to hats and mitts for the girls fairly fast. When those were done, I looked at that cardigan and felt I should work on it. But whenever the opportunity arose, I’d mess around on my phone instead. I think that’s a pretty decent sign that I should put it in time out again. I may gave it a third chance later but I suspect I’ll be getting rid of it. It’s just annoying me now.

Anyway, I finally bought a pattern I’d been itching to knit up: On the Spice Market. I even had the yarn ready to go (Spirit Trail Fiberworks Non gradient in Summer in the Mountains and Backyard Fiberworks sock yarn in Seed). I started it and now, I’m obsessively knitting, pausing only to admire it and force my family to tell me how pretty it is. 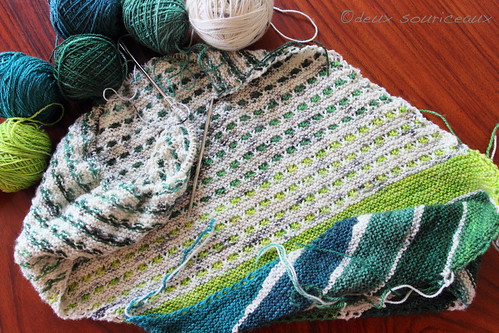 It’s easy and relaxing. Perfect tv knitting. And did I mention how pretty it is? Because it’s so pretty… 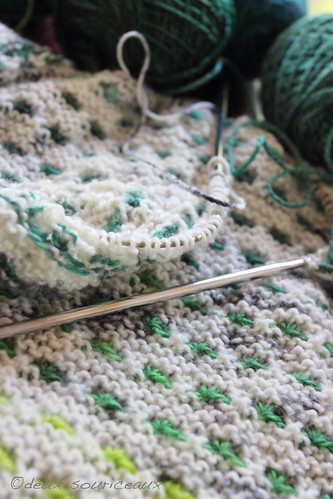 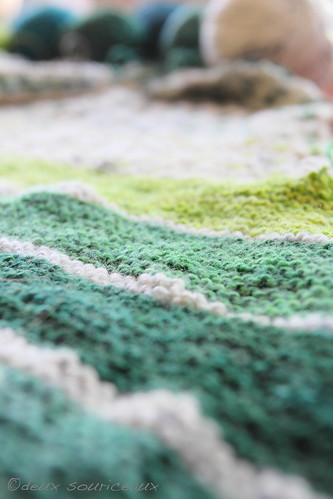 It’s so lovely to be excited about my knitting again.

PS: I’m still working on that blanket from two years ago too, only it’s on pause because I haven’t yet made anything with the next yarn I want to use so I don’t have any remnants of it.

2 comments on “Henry and Mudge Leggings”