This week is separates week and I got to sew up one of the patterns. I went with the Aviator Pants by Winter Wear Designs. I’ve always liked them but my girls were dress wearers when the pattern came out. E wears more pants now, as long as they’re stretchy and comfortable. Even then, I wasn’t sure she would go for these but I gave it a shot. To put all chances on my side, I chose a cozy double sided knit from Imagine Gnats (hopefully, the fabric is still in stock and the link works). Bonus: it’s double sided so I didn’t have to hunt around for a matching fabric for the color blocking. I just used the reverse, keeping the stripes as the main.

E was between two sizes so I went with the bigger one. 10! I was so surprised. She’s a tiny thing who still has room to grow in size 8 clothes (she’s 10 for the record). Of course, her waist is a size 7. I didn’t do any grading between sizes though because the waist is easy to cinch up with elastic. So they’re a bit long now but with the tightened bottom, she doesn’t step on them. It just makes the color blocking at the bottom a little harder to see. 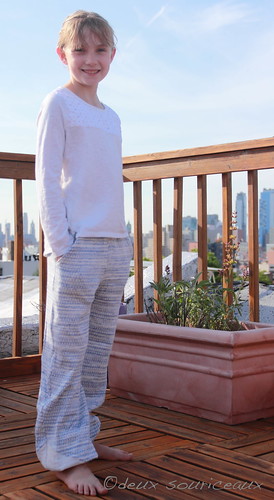 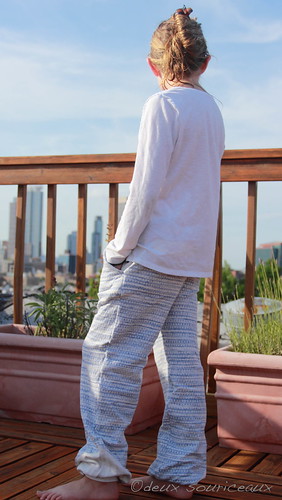 I asked E about the pockets and she said she was fine with the front and back pockets but to skip the cargo ones unless I could put them inside instead. Ha! No. I used some leftover light yellow woven cotton for the welt pockets, as suggested in the pattern. It helps have a little more control. 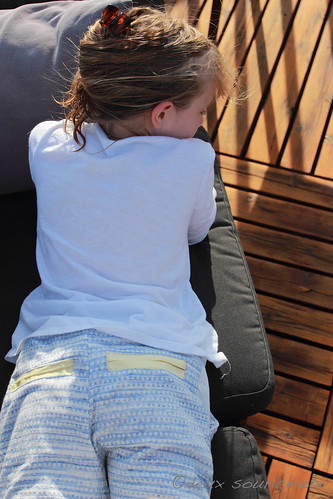 (Yeah, no stripe matching here. I had a little extra fabric but not enough to mess around trying to match the stripes.) 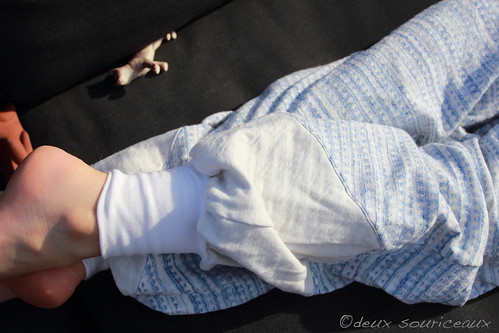 If I have one piece of advice for anyone making up this pattern, it would be to make sure your ribbing is as stretchy as required. I think mine may have been a little more stable. I didn’t bother testing it. I had to stretch it out to its maximum to fit at the ankles. I also used a different method to insert elastic at the waist. I measured it out and sewed it in a circle, and then put it inside the waistband before attaching it with my serger. 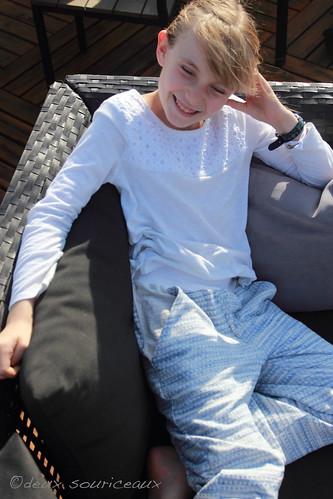 I had E put these on for pictures when she still had wet hair from her shower (she was supposed to take her shower after the pictures!) She wore the pants all evening, then to bed, then all of the next day. As I’m writing, two days later, she’s still wearing them. And the hair clip she “borrowed” from me. Think she likes them? 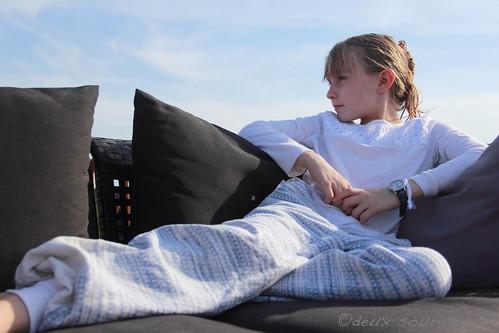 All separates patterns are 20% off this week so go stock up! No code needed. There’s also a great giveaway you can enter through the blog. I tried to add the Rafflecopter widget here but I couldn’t get it to work but I’m still jet lagged and my brain is too mushy for this! Which reminds me, the pants came along on our trip and were worn during the coolish windy nights in Cadaqués.