I decided last Spring that I was going to use up my special fabrics. The St James ponte from Mood (coming up soon; well, one of them). The Liberty of London that I bought two years ago at Liberty of London itself (that’s this dress). The fabrics I bough in Provence last year. And some other stuff. I didn’t get to use all the fabrics but I did make a dent.

The yellow fabric for this skirt is from Provence. I fell in love with the cicada print but yellow hates my guts. Seriously not my color. So I knew it would become a skirt when I bought it. I think it’s tablecloth fabric. It’s cotton but it has no drape at all and it seems to have some sort of coating on it. Not laminated, just enough to make pressing from the back or with a cloth necessary. And water seems to pearl on it before being absorbed despite my having washed it twice. They didn’t tell me this at the shop. I suppose they didn’t think it was necessary to tell me since it was also a home goods store and most people actually don’t wear these prints. 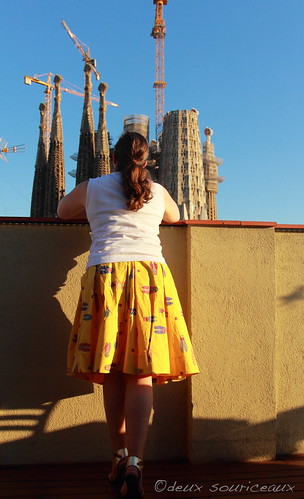 (Wrinkles are due to wearing the skirt all day and also taking a nap in it. What? Vacations are for napping. Also, sunny and hot, lots of walking, and late dinners mean that naps happen.)

Last year, I made a half circle skirt out of some pretty fabric. It’s too big now. I’ll have to see if I can take it in without unpicking half the seams. Anyway, I wanted something similar but different. Pleated but not straight. Like the skirt from the Blake dress pattern. That pattern even has the pockets hiding in a pleat. I love that detail! So I just took the pleat guide from the pattern and reproduced it. (Printer was on the fritz and has since been replaced by a lovely, lovely red one that does its job way better.) I made a straight waistband and skipped the interfacing because the fabric was so stiff I didn’t think it needed it. I was wrong and I will have to starch that waistband to get it to stop scrunching down. I made a deep hem and did an invisible hem by machine.

I love this skirt but on short me, it has to be worn with a tighter top or I end up looking frumpy. See here. 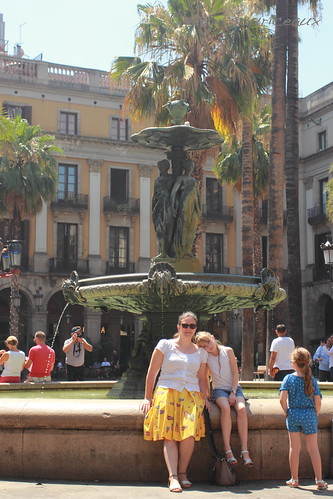 I’d forgotten that I had planned on wearing a knit top with the skirt and wore a blouse. When I asked his opinion, M said I should leave it untucked. I was doubtful but listened. Big mistake. I need something that will either be very fitted or tucked in. Otherwise, my waist gets obliterated and I look like a ball.

Enter this top. This is Jalie 2804. The fabric is from Mood and I tried to make McCall’s 6839 with it. It was my third try with the pattern because I love the look of it so much but I think I’ll just have to admit defeat. This pattern just doesn’t work for me. The shoulders are just drafted too wide. The Jalie worked much better though I do have to add just a small hand stitch to tack the crossover together at the front. It tends to want to open up. I also had issues at the armscye. Weird blob of extra fabric at the front underarm. I had the same issue last time I made up that pattern years ago. I took a small dart there. Oh, and I switched up how the channel for the ribbon is sewn on. The instructions have you put it on the right side but I put it on the wrong side. It felt neater that way. It made getting it placed just right a little harder but it worked. 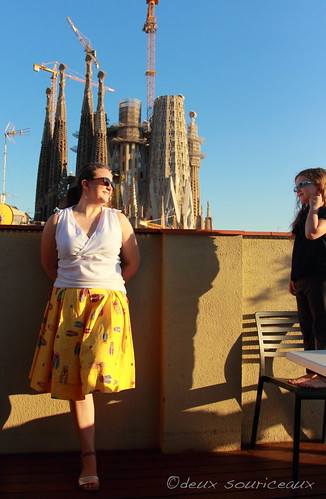 Of course, my skirt did not use up all the yellow fabric so I have to find something else to make with it. Maybe shorts for E. V told me very tactfully that, while the fabric is very pretty and she likes my skirt, she would not want to wear it… 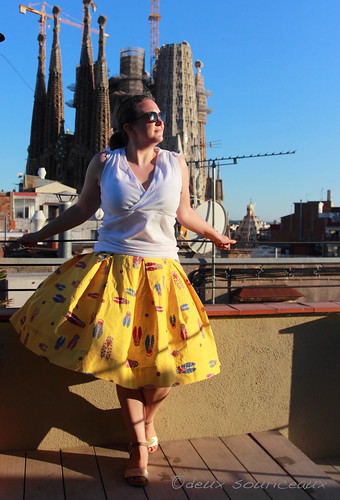 PS: I think I need to get myself a petticoat to wear under this skirt. I love how the silhouette I got when the wind floofed it up.

PS again: The sandals I’m wearing? Are amazing! They have never given me a blister. Total comfort from the first moment. They were even gentle on my poor, raw heels. I wore band aids and the sandal never rubbed them off. They’re the Alanis by Miz Mooz and the only issue I have with them is that the sole is quite thin so my feet were feeling the lack of cushioning at the end of a long day of walking. On a regular walking day, they’re fine.

3 comments on “Working Through Precious Fabric 1”