This is the last of Barcelona and were all taken in what I call the old city, where the streets are winding and you can lose your way in an instant. It’s charming, especially once you start figuring out where you’re going. All the pictures here were taken over the course of 4 days and, by the end, I was starting to get it. 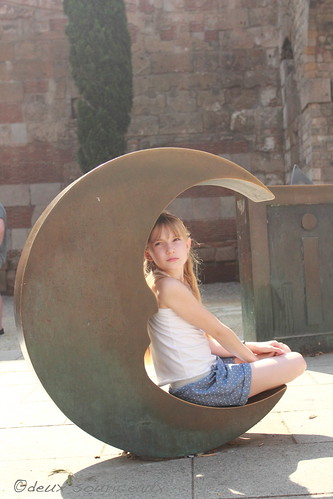 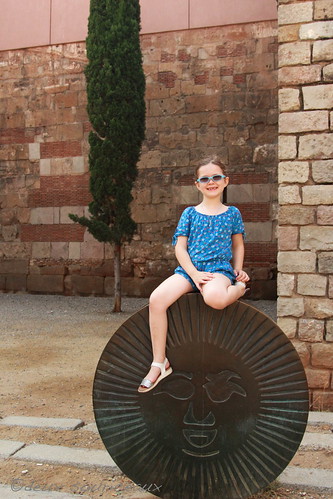 We spent a lot of time in Barri Gòtic. There was a little neighborhood walk in our guidebook and we went for it. It started at La Catedral. It’s kinda weird because next to La Sagrada Familia, it’s “just a gothic church”, you know? Yet, it’s spectacular. So much stone work and detailing. 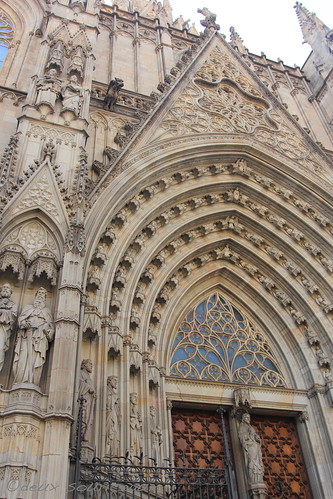 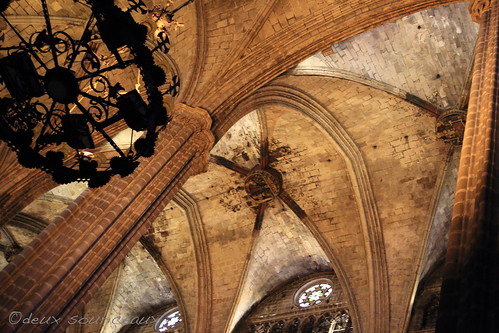 And you can go to the roof! I was the only one to be excited about that. Whatever. 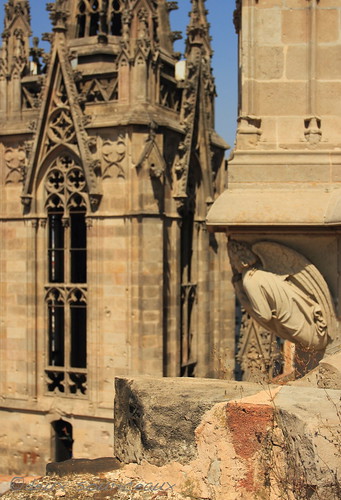 And then, right before leaving the cathedral, there’s a little cloister with a fountain and geese. They were so loud! And clearly used to being fed by humans. The girls loved them. We must have spent at least 15 minutes there. 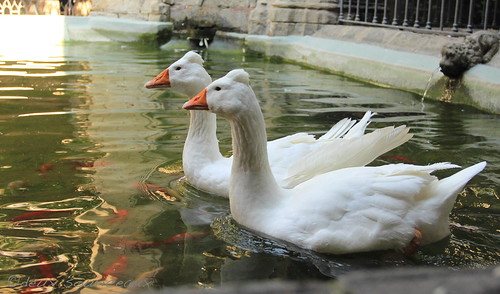 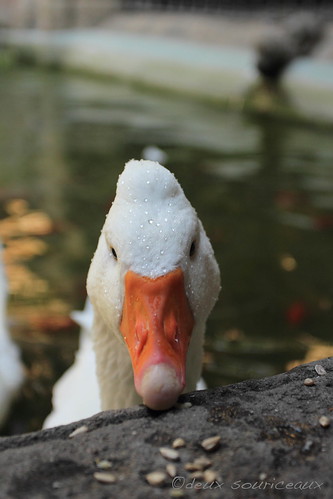 Following the walk, we ended up in a little plaça. Those little hidden places may be the most charming thing about old cities. You just come upon them randomly. There’s nothing special there, maybe a fountain, maybe nothing, just a lovely spot to hang out. 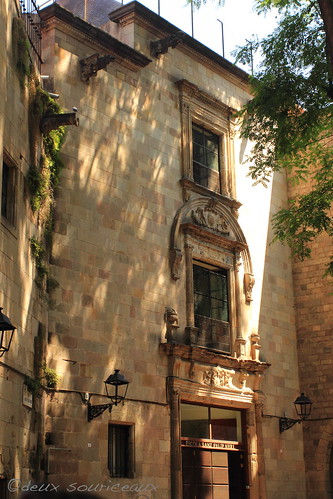 Strolling along, there were so many times where we walked in these narrow side streets with no sidewalk. We’d look up and see the buildings curving inward a little at the top. 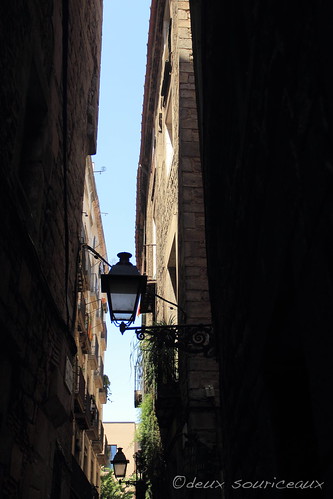 Later, we spent a day in La Ribera, a neighborhood right next to Barri Gòtic. There’s a big park there and an arch, the Arc de Triomf. I was expecting something sort of Roman like most arches I’ve seen but this one was different. It’s Modernista but it had a bit of a moorish vibe to it. It’s so pretty. 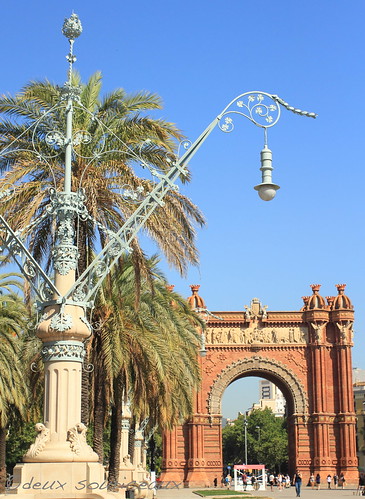 We simply walked around, admiring the city. Every once in a while, we’d happen on a historical site. Nothing special because there are so many, just there. Isn’t that amazing? As a North American, I’m not used to ancient sites all around and I just wanted to get pictures of everything. 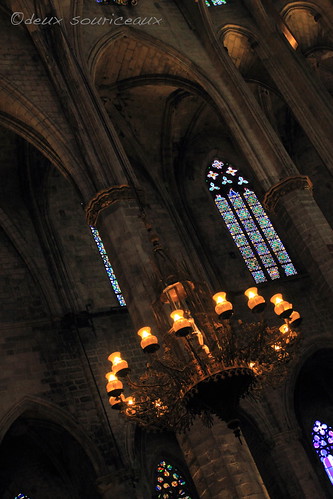 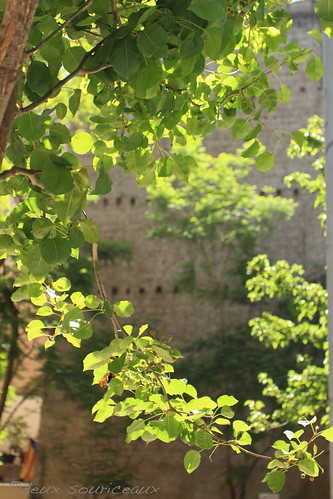 We saw the Palau de la Musica Catalana on that first day but made a not to come back another day. Which we did. Our guide told us that it was built by Gaudi’s master and we could definitely see his influence in Gaudi’s work. The nature motifs, the craftsmanship everywhere… And we could see how the student had pushed further. 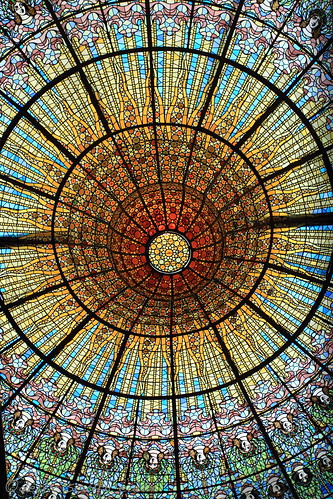 The stained glass ceiling in the main attraction but there are so many details everywhere. Mosaics, stained glass, sculptures… Even the cheap seats get treated to beauty. 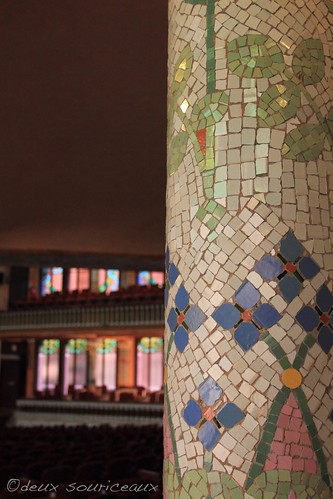 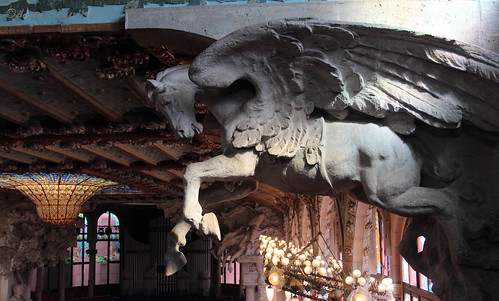 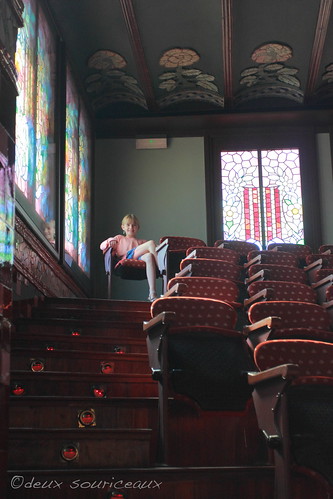 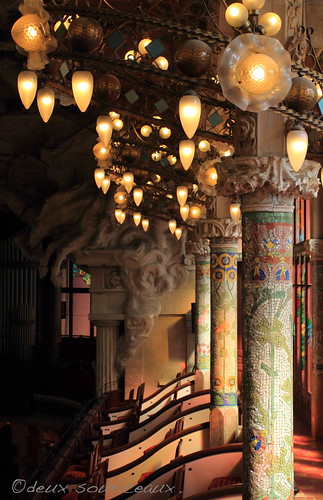 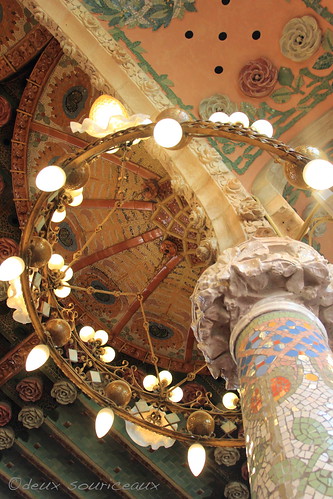 Oh, and we got to hear the organ! There was no one to play it but it can also be played by a computer. As in, the organ is activated by the computer, not a recording.

Funny thing is, our first day in La Ribera, M found a good coffee shop in a lovely street. I want to say a pedestrian street but cars go in streets that seem too narrow to me over there so I can’t be sure. Then, when we went to see the Palau de la Musica Catalana, we went to the same coffee shop but arrived from the other side. 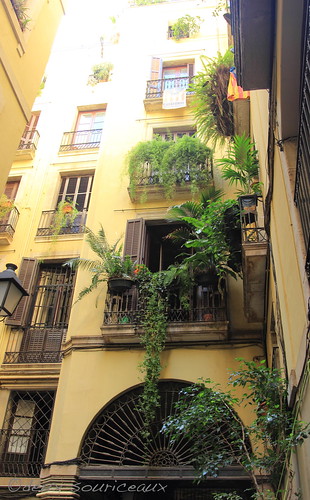 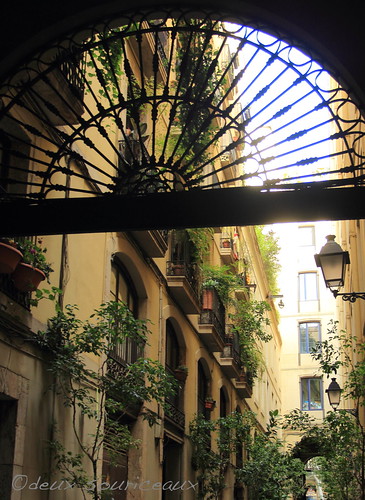 Finally, on our last day, M chose where to go in the morning and he chose El Raval, right on the other side of Barri Gòtic. We found another little place with old buildings. I couldn’t tell you the name if I tried. There were orange trees and people just hanging out. 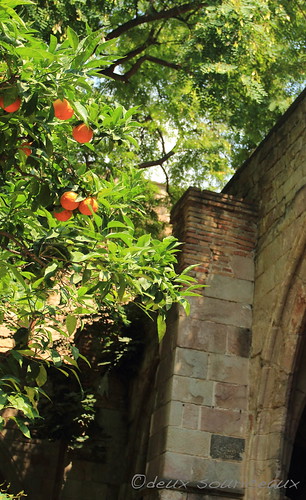 E was bored so we didn’t stick around very long. Little did she know that she would be spending hours in the car the next day…