This is the top of all the delays. I cut it out in December and it stayed there. I lost use my sewing space for a bit but I’ve had it back for months now. And yet, the top didn’t get sewn. Inertia. I eventually kicked myself into gear and sewed it up. And then it waited for pictures. I actually had the pictures taken and edited last week but flickr was down and I couldn’t upload them! So, finally, my Mimosa top!

I’ve forgotten what size I made but I went by the sizing chart. I went with the tie sleeve, as you can plainly see. 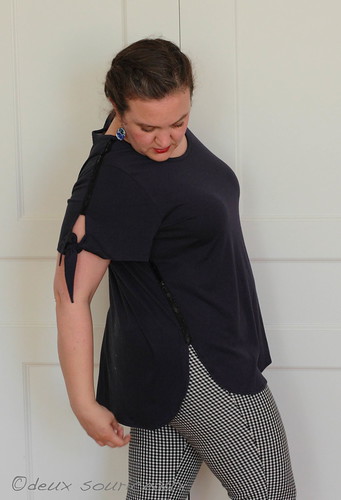 The fabric is from my stash. Some sort of rayon knit, I think? I know it’s from Imagine Gnats and that it isn’t on the website anymore. Color is a deep purple, hard to photograph! The fabric itself has a lot of drape and feels like it would be difficult to sew. That’s actually one of the reasons it took me so long to sew up! In reality though, it behaves quite well. 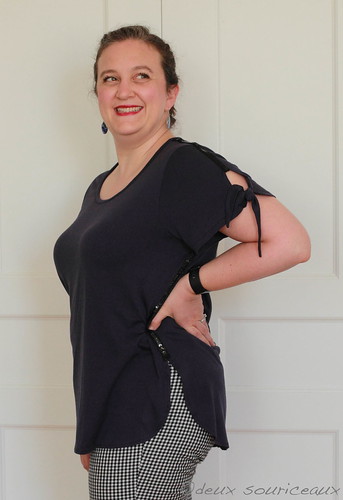 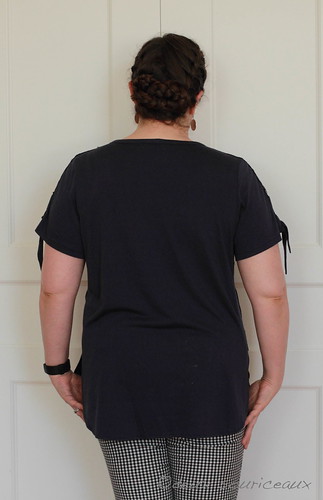 The pattern itself is what I’ve come to expect from Jalie. Great drafting, concise but accurate instructions, 1/4″ seams. No issues at all. I wanted to add a little bit of a seam treatment though. At first, I was going to use lace insertions at sleeves and shoulders but I wasn’t sure about it. Looking at sleeve construction and seam allowance, I felt I might be making this a little more complicated than necessary. Especially since I was thinking of doing the same treatment on the side seams. I wasn’t sure of the lace I’d picked either. I rummaged through my ribbon and trim box and found some leftover black sequined trim from another project. There was just enough for both sleeves/shoulders and side seams. I just edgestitched it over the seams. 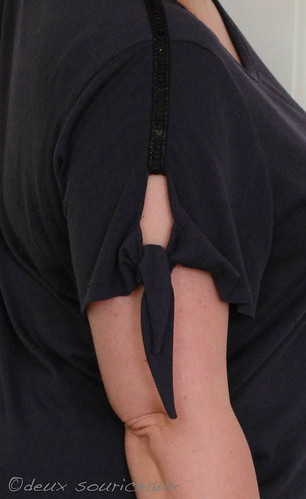 I debated skipping the side seams but E said I should do it. I listened but now, looking at the pictures, I’m not sure I should have. The trim is a little stiff and doesn’t let the fabric drape properly at the sides so I’m getting these weird bumps on the side. And it’s a little bit scratchy on my upper arms when they rub against my sides. Not enough to be a problem though and I suspect the bumps aren’t nearly as bothersome in life as in pictures. 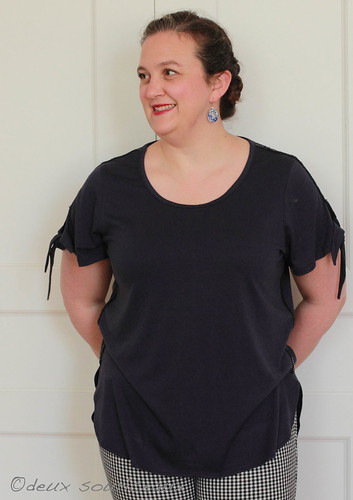 I left the edges raw on the inside. It bothers my perfectionist side a little but it’s fine. It actually looks kinda neat inside. 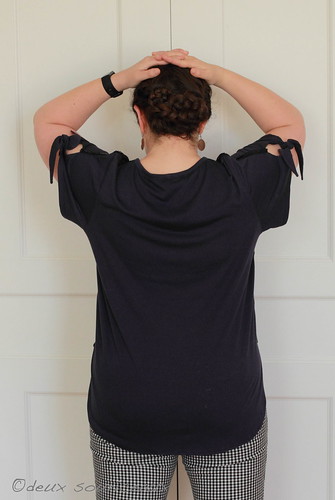 I was going to make May all about sewing for myself but that didn’t work out. This top was finished before May and I haven’t quite finished the one other top I started. I’ve been prioritizing other activities (like tasks that need to be completed!) But I’m going to keep pushing forward and hopefully, I’ll get back into it soon enough. 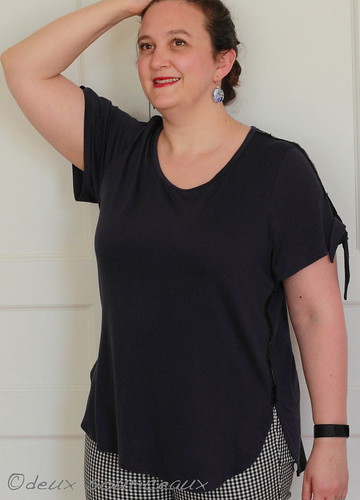