We went on a few outings when we were in Santorini. The girls were not always ecstatic about them. They took away from pool time, you see… However, we had no complaints about the first one: caldera cruise! The cruise was on a smaller boat, 8 passengers only. Well, 7 on our cruise. We shared the cruise with 3 lovely Greek-Australian young women. (If I understood correctly, all three are second generation immigrants. They went on to go visit family on some other Greek island afterwards.) My girls were ready to give the stink eye to anyone who dared smoke on board and our what? copassengers? admitted they would have done the same. The captain used to work on oil tankers and was excited to learn that M and I are from Quebec. Apparently, he never made it to Montreal on the tankers but he had been to Quebec City. Anyway…

We boarded the boat on the non caldera side and the ride took us inside the caldera. 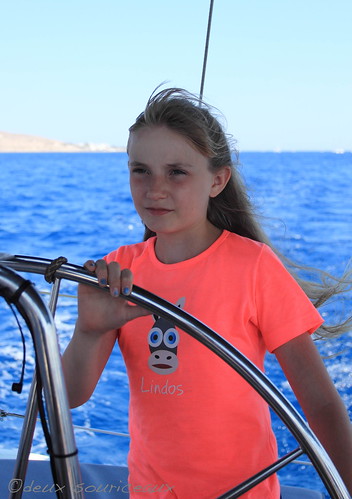 (Yes, E is actually “driving” the boat here. V was offered a turn but she refused.)

The captain pointed out a few things but honestly, I was mostly in awe of all the different types of rocks on view. It was beautiful and I wished we had a geologist on board to explain everything. 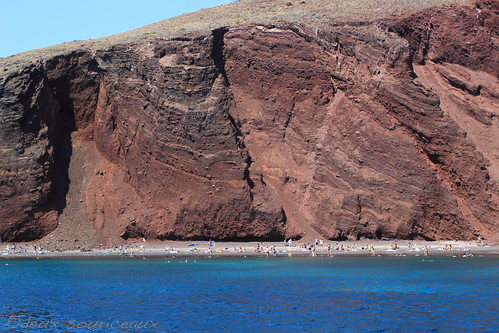 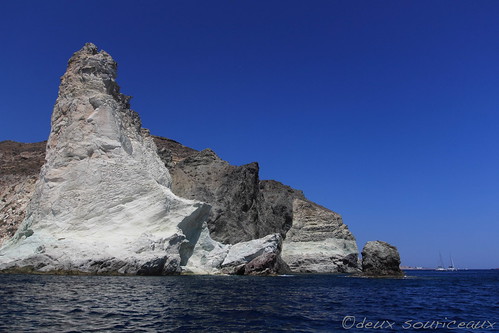 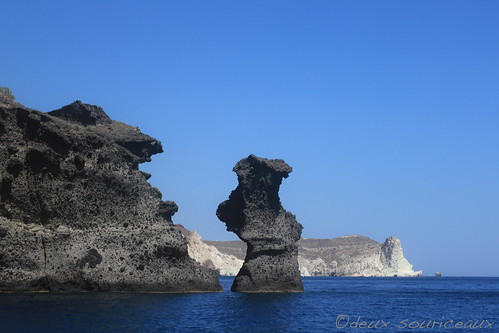 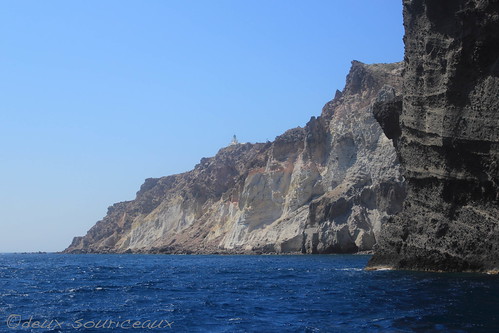 We reached the island of Therasia (it’s another island on the caldera) where we did some snorkeling. So many fish! I need to get myself a Go Pro. Seriously. After that, we had dinner and slowly headed back towards the port. 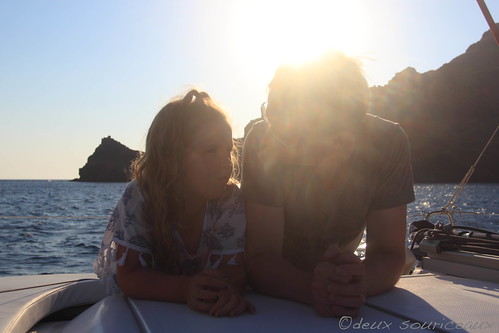 Very slowly. So we wouldn’t miss the sunset. 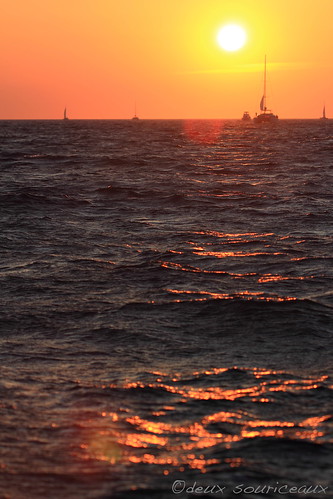 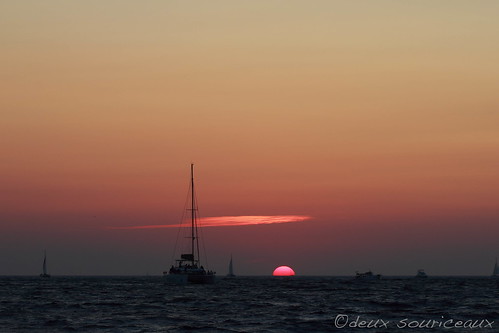 (Side note: Do you have any idea how hard it is to get your horizon straight when on a boat? I swear I tried so hard and they were all crooked. All the pictures! Thank goodness for editing…)

Our second outing was a packed day. We started off with Akrotiri, an ancient Minoan city that got buried under volcano ash. Apparently, the citizens had already fled by that time (smart people). Anyway, the city was buried and well preserved. Only a small part of it has been uncovered and they’ve built a structure over it to protect it from the elements. Said structure also protects the humans from the elements… 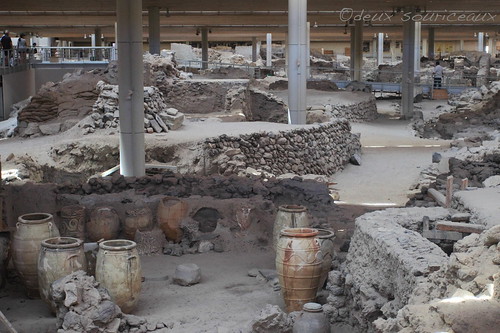 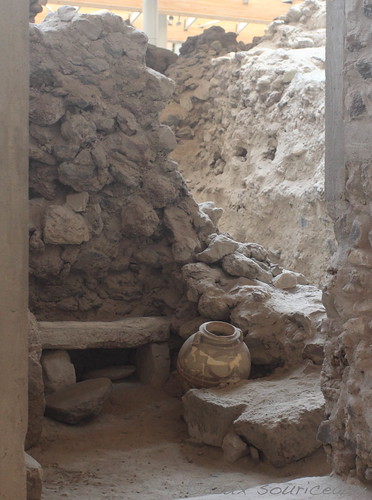 E was excited about this visit. She studied ancient civilizations in school and picked the Minoans for her assignment. She spent part of the visit explaining things to her sister. (Hashtag cutest thing ever.) 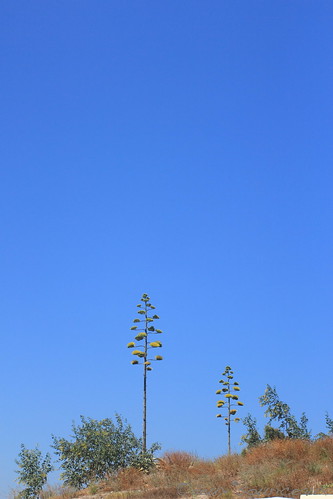 After lunch, we went to our second visit of the day. Lots of complaints this time. We visited a winery… E groaned and mentioned that one day in California where we visited wineries. (Three of them! With a stop in a small amusement park! What a horrible day for her!) We promised we were only visiting one. 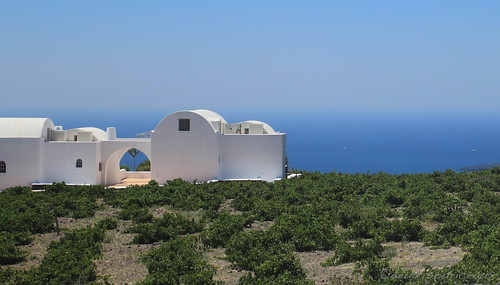 Okay, so this is kinda cool. Santorini actually has a desert climate (according to our guide at the winery). Very little rain and quite a bit of wind. So the vines can’t grow tall like they usually do. They make them grow in these little nest formations on the ground. That protects them from the wind. In the morning, there’s this mist that rolls in from the sea and that’s what waters them. 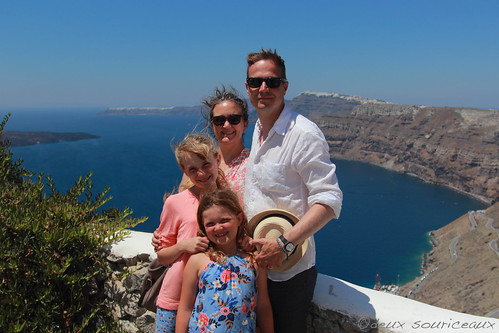 (My hair is a total mess thanks to the salt and the wind but the girls love having pictures of all of us so when someone offers to take our picture, I accept.)

And our last outing was to Fira, the main town on the island. We basically just wandered around, taking it in. We actually went twice because the archeological museum was closed the first time. 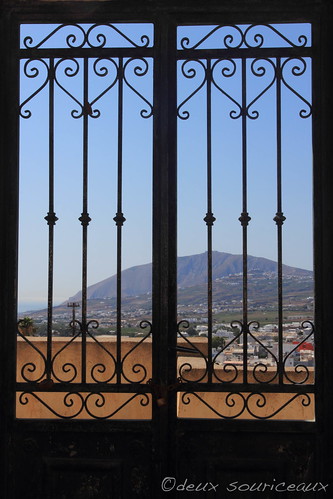 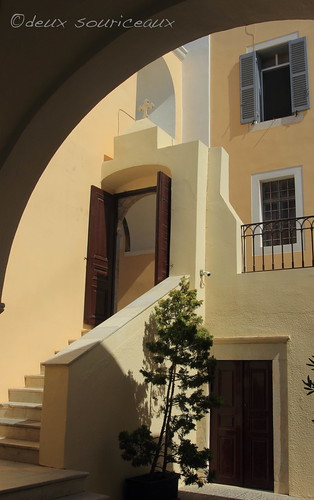 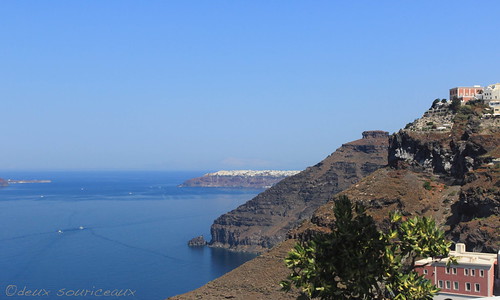 (That white town in the distance is Oia.) 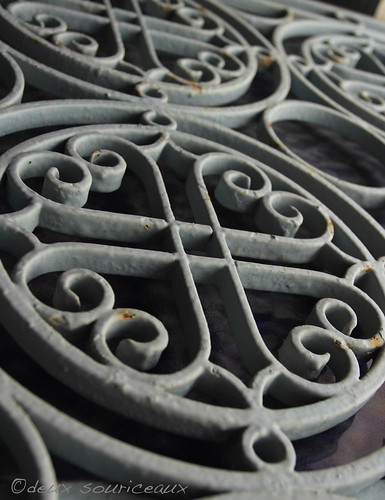 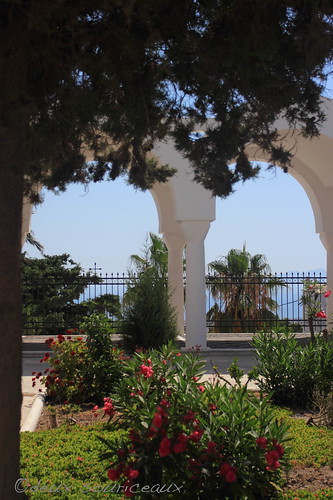 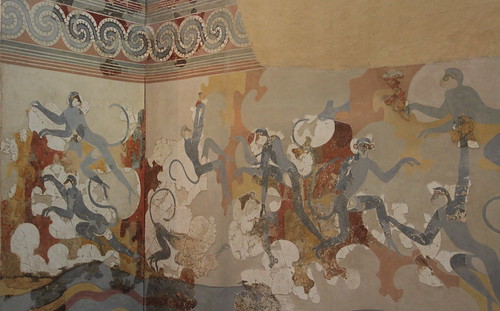 (The museum had artifacts from Akrotiri and the murals are so pretty! Artists painted some extra bits to show what they would have looked like back then.)

And that’s it for Santorini! We finished our trip in Athens and I’ll show you those pictures next week.