There’s this top I made myself before our trip. There are three tea towels that I dyed almost a month ago. And there’s yarn that I finished spinning a week ago. None of these things felt like it required its own post so I’m just sticking them together. They have nothing in common apart from being things I made.

The top is McCall’s 7570, view B. It looks so fun in the picture! I made the size 18 in this pointelle-ish light grey knit I got at Mood. And the fit was right. Except the back was droopy and weird. It dipped well below my bra and even the straps were visible on the sides where top back pieces and bottom back pieces met. So I tried to fix it. 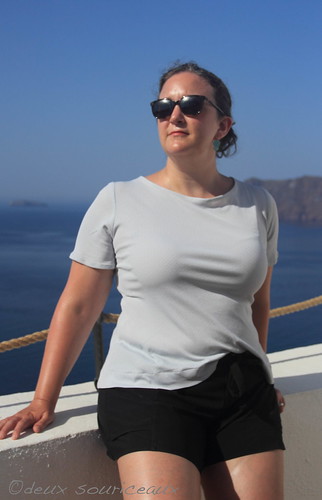 I slipped some elastic in there to bring it up just over my bra. That made the top pull at the sleeves a little but I couldn’t find a better way to manage the issue. The bra straps were still visible so I tried to get E and M to help me place the top pieces of the back in a way that would cover the straps and I sewed the top and bottom together at that spot. I thought I could get M to tie the top so that it looked smooth. The gathering and the pulling at the seams weren’t great but I thought I could live with it. I took the top to Greece and had M take pictures. He said he liked it. And then, I looked at the pictures. 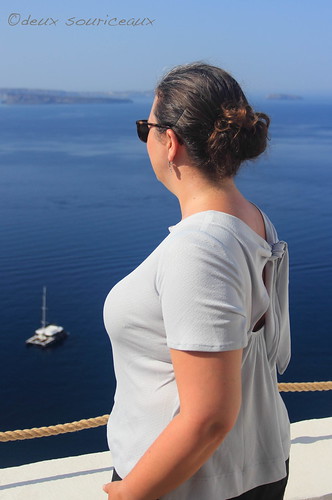 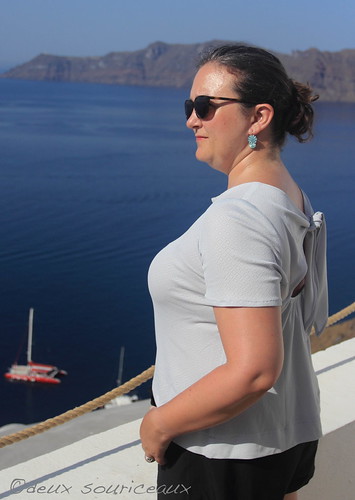 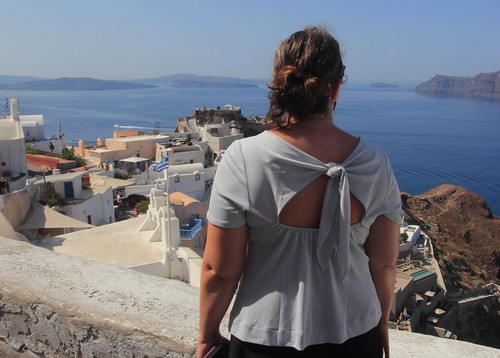 I just can’t with all that pulling and the knotted pieces not lying flat. I haven’t worn that top since, just keeping it to scavenge some fabric from it. I may make view C or D at some point because, like I said, the fit was actually good. If I have the energy, I might even try to fix the pattern for view B. I feel like if I just moved the top edge 2-3 inches up, it might work. It would be a smaller hole in the back but my bra would be covered with any fixes. Huh. I’m actually talking myself into giving this view another try…

Next up, my tea towels. I got a set of 12 tea towels and a shibori book for Christmas. I decided to make some while the girls were at camp. I started with scouring the them which took my forever. Then I set to stitching them which took even longer than forever. There was the planning, the drawing, the stitching, and the pulling up of threads. I was gonna do 3 sets of 4. I made one set of 3.

I waited for the girls to do the dyeing. We did it “together”. I didn’t have indigo so I mixed violet and navy reactive dyes together. 2-3% violet and 1% navy because I was afraid the navy might overwhelm the violet. Yeah, no. The violet took over. I should have gone with half-half. In all, I’m neutral on these. The color isn’t what I was trying to get though I guess I could play around with it a bit and do some overdyeing. Yeah, not gonna happen.

This first one I made is probably my favorite and I was just trying different things out! I worked on a 1/2″ grid most of the time but there are a few spots where I played with going wider and narrower. 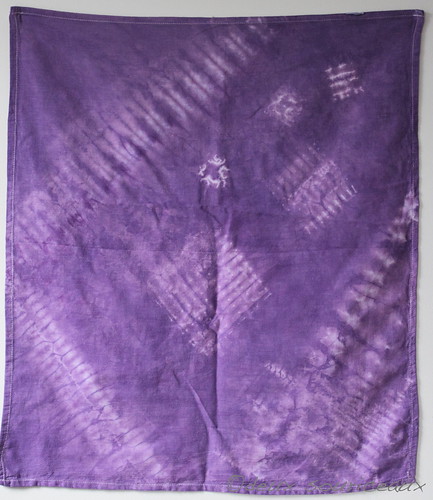 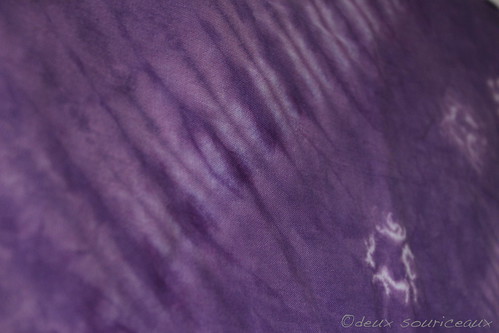 For the second one, I folded the towel once each way and made a triangle grid. I like this one even though it didn’t quite give the result I thought it would (I thought I would get some chevron action happening but it didn’t turn out like that). 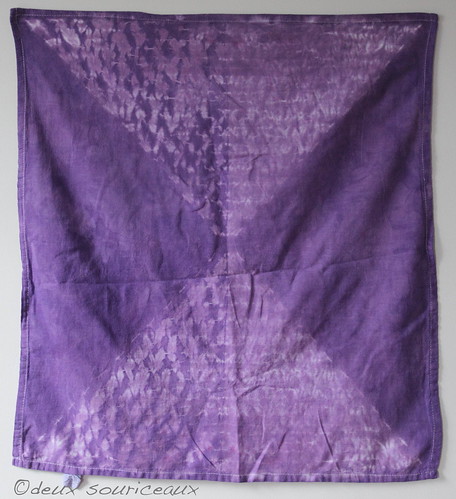 (You can see a little bit of a more reddish color here. I think it’s violet dye powder that didn’t mix in properly before it attached to the fabric.) 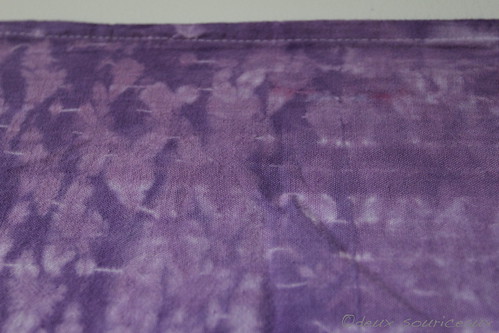 And finally, I did a starburst thing for the last one. I think it might have worked better if each ray of the starburst had been a double or triple line of stitching. 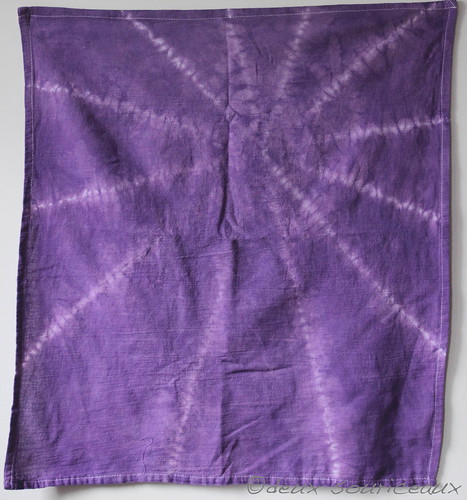 I promise I actually ironed the tea towels before taking pictures but I folded them and V sat on them. So they creased again and I didn’t have the energy to get them flat again.

Finally, the yarn, my favorite! I started with an Into The Whirled Falkland Wool Carded Batt in Sterrennacht (Starry Night). My goal was to go a little thicker than usual (I tend to spin laceweight yarns but I don’t really knit laceweight yarns!). I started with the yellow side and was spinning thinner than I wanted. I somehow ended up in a bit of a thick and thin situation. And the pictures make it really obvious that I had managed to spin quite a bit thicker singles by the end. No clue how that’s going to work out in a project… Anyway, I did want to ply my single but not with itself. So I got some white merino 2/18 from my machine knitting stash and plied it with the single. 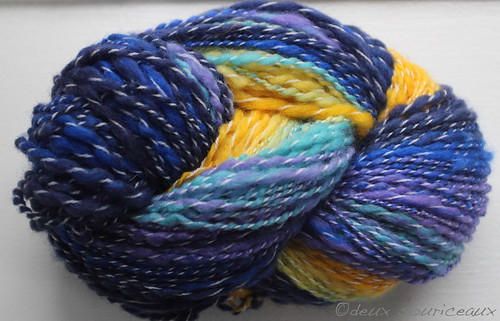 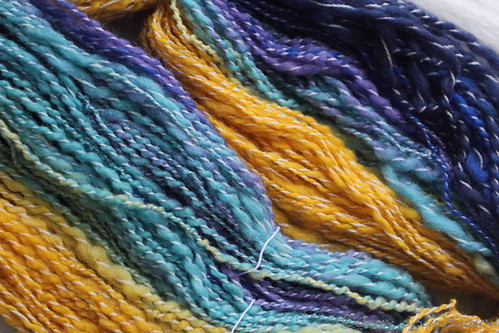 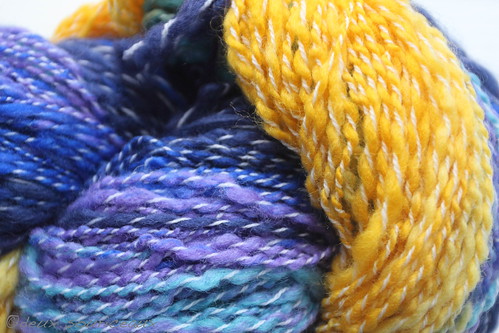 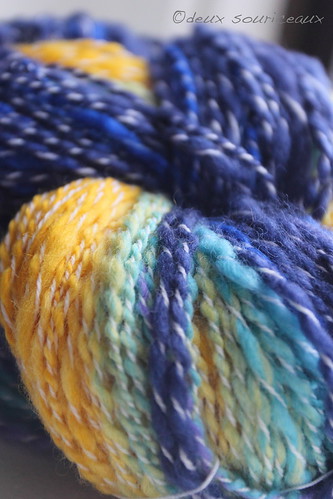 I love the result! I can’t wait to figure out what project to make with it. Guess I’m going to have to measure it and figure out its weight first.